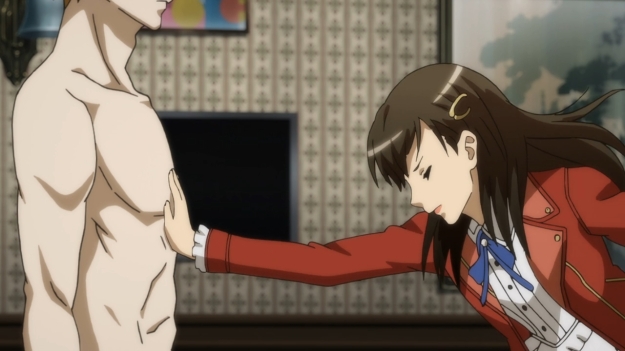 — Ton’s best friend has been kidnapped, so she immediately goes to the guys for help. Wait, I thought Vlad had erased her memories. I guess not.

— We finally get to see an OP, and it features a young, boyish character. Japan is obsessed with youth. Every harem has a loli, every reverse harem has a shota. It’s just odd.

— But at the end of the day, Ton is getting a lot of screen time with Vlad. It almost looks seems she’s destined to end up with the guy. First, talk about spoilers. Second, this doesn’t look like much of a reverse harem, you guys.

— After the OP, Vlad wants to know why he couldn’t permanently erase Ton’s memories, but it’s not like she would know. She’s just special, okay? She’s Rijan’s descendant!

— I only took a screenshot of this guy’s face, because his exasperation is amusing to me. It turns out he’s the bishie’s singular point of contact in the police force.

— In their attempt to locate Shinyao (I guess the girls are all Chinese), Wayne decides to show up and lend a hand. You can’t see him because he’s a ghost. As a result, he can only communicate by possessing audio devices like, say, a radio. Oooh, spoopy.

— Vlad explains that ghosts, ghouls, and goblins are real. Just by imagining them, you bring them forth into reality. Man, I wish I could do that with a million bucks. Funny how the power of imagination only ever works with hot vampires. 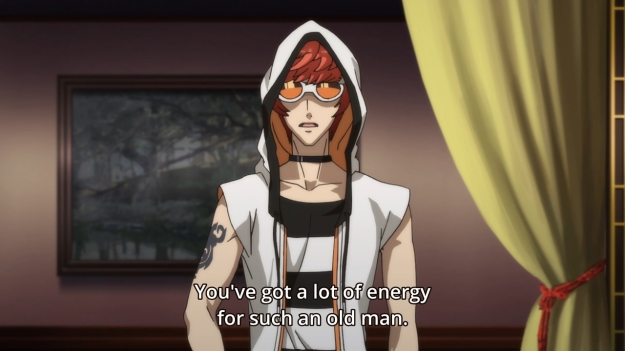 — This guy’s name is simply Chris. Yep, Chris. They need to hire a better character designer, because I think he looks stupid. Anyway, he’s in cahoots with this dude from last week’s episode. For some reason, Haysin wants to awaken Ton’s hidden power, and that requires them to endanger Shaoyin’s life. Chris, however, doesn’t agree with Haysin’s methods, so I picture him splintering off and joining the bishies at the cafe at some point in the near future.

— Speaking of Shaoyin, she wakes up to find herself in the middle of some dark department store. Extra spoopy.

— Like most vampires, Vlad can only enter your home if you explicitly extend him an invitation. But once you do, he can seep through the cracks of your walls like poisonous gas. Or that evil thing from Ferngully.

— Meanwhile, Ton is stuck in Vlad’s room for her own good (supposedly). She acts as if she’s never seen a generic vampire coffin before. Has she never heard of Count Dracula? He makes delicious cereal. Oh wait, that’s his cousin Count Chocula.

— Now we get to see Wayne possess a cellphone. For some reason, this means he has a devil boy avatar. Maybe he can force the smartphone to render his image.

— I love fake code. Anyways, there’s an app in this universe that can supposedly predict what the user is thinking. That’s right, it can read your mind. Wayne attributes this to amazing programming, but there’s probably a supernatural component to it.

— This same app suddenly allows Ton to see that Shaoyin is being chased by some creeper. It even tells our heroine where to find her best friend. C’mon, this app is totally being controlled by someone. Maybe even Haysin himself. In any case, Ton just can’t stay put. Much to Vlad’s dismay, she has to go and help her best friend herself. 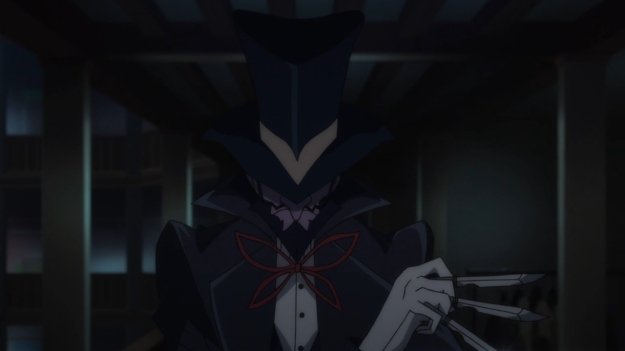 — This is the monster that is chasing Shaoyin. Kinda looks like an evil Abe Lincoln.

— Ton gets to her best friend in just the nick of time. As a result, she is able to tackle Abe Lincoln down a flight of stairs. The storyboarding here is amusing. I just don’t know how you manage to trip then drag someone into a whole different room in the process. She should try out for the NFL. The Rams could use a linebacker.

— After a brief tussle, Ton finds herself falling over the second-floor railing. Luckily, she is saved by Wayne. Wait, you might be thinking, I thought Wayne was a ghost! He is! But this time, he’s gone and possessed a mannequin of a young boy! So y’see, he’s not really a shota… he just looks like one. You can’t even be creeped out, because it’s not like mannequins have sexual organs!

— Finally, Vlad tells Ton over the phone to ask for his help. In doing so, she “invites” him in. He suddenly swoops in outta nowhere to save the day.

— Wait, really? Evil Abe Lincoln over here is really Jack the Ripper. C’mon, why did you have to go and make Jack look like such a punk.

— Vlad announces to the whole word that he is none other than the descendant of Bram Stoker’s Dracula. That’s cool and all, but I don’t remember Dracula ever knowing kung-fu.

— The funny thing is that our main bishie didn’t even bother to check if he managed to kill Jack the Ripper or not. After knocking the baddie through the wall and right out into the streets, both he and Ton just breath a sigh of relief and then the scene is over. Um, what about Shaoyin, you guys?

— In the streets, we see that Chris has decided to show up and finish the job. He isn’t happy that Jack the Ripper tried to kill Shaoyin. Um, he’s Jack the Ripper. What did you expect him to do? Not let it rip? 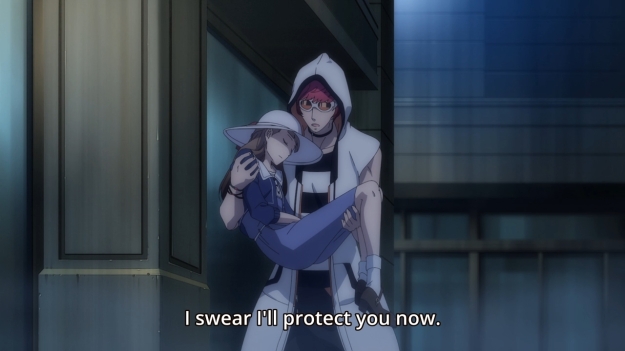 — Afterwards, he checks up on Shaoyin, so I guess she’s okay. In fact, it looks like the best friend will have a bishie of her own as well. Isn’t that nice? Usually, the side characters never get any love in these stories.

— Is Phantom in the Twilight any good? Of course not. But it’s not super bad either. It’s just… there. In what is shaping up to be a rather forgettable summer of anime, this show is currently an okay time-waster. At least it has some action to make up for its lack of compelling characters or a plot that I would give a shit about.