Here’s everything else I watched.

— Terrible OP. One of the worst songs I’ve heard all year. In fact, the show’s soundtrack is really bad in general.

— Same problem as before: Zack talks too much. On the other hand, Rachel has become completely emotionless. They’re not the most exciting duo.

— Rachel wants to die. Zack wants to escape. So in return, he promises to eventually kill her if she can help him find a way out. Y’know, she could just kill herself. Bash your head against the wall if you want to die so badly. But apparently, she won’t commit suicide, because she believes it’s a sin. Um, okay. Fine, go find one of the many psychopaths in this building to kill you.

— She must have recovered some of her memories at the end of last week’s episode. And considering how badly she wants to die, she must have done something horrible. Something unforgivable. I bet you a hundred bucks she killed her parents. Unfortunately, the story operates by withholding information from the audience. It refuses to tell us what Rachel remembers. Midway through the episode, she finds a record of herself and reads it. But do we get to know what her report says? Of course not.

— But is this building even real? Or are these two perhaps trapped in some demented realm — a place hellbent on physically and mentally torturing its prisoners?

— I think the premise has promise, but the execution is absolutely garbage. The writing is embarrassingly amateurish. All of the characters are ridiculously cartoonish. But if you think random giggling in the dark is creepy, this might be the show for you. 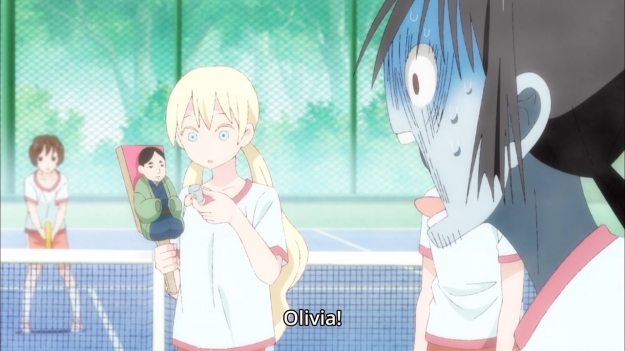 Still my favorite show of the early season.

— The platelets are still super adorable.

— The mix of 2-D and 3-D animation is not too successful here. You can’t really tell from a static screenshot, but the 3-D extras move so awkwardly compared to the 2-D main characters.

— Never before has bacteriology been so interesting. Leave it to anime to make staphylococcus aureus look so moe.

— What I would like to see, however, is an episode that isn’t devoted to fighting bacterial infection or illnesses in general. C’mon, it’s called Cells At Work!, not White Blood Cells At Work!

— Aw, saved by the platelets.

Much funnier this time around. I like the show a lot better when it actually isn’t about Chio’s wacky, over-the-top attempts to get to school on time. For example, her banter with Manana was incredibly amusing. Our girl was so delightfully bitchy. It’s also something that I can relate to. When your friend is being an ass, but they just played themself… man does it feel good to rub it in. As for stuff with the delinquent biker dude? Meh.

This episode nearly put me to sleep. The mystery of the week was boring, and the two main characters have no chemistry whatsoever.

Wow, talk about rude. Anyways, Jashin-chan Dropkick did not manage to recover from its weak premiere like Chio’s School Road. This week’s episode is just as unfunny as last week’s. The anime has nothing but dumb, terrible characters. I tried to give the show another shot, but I’m going to drop it permanently. 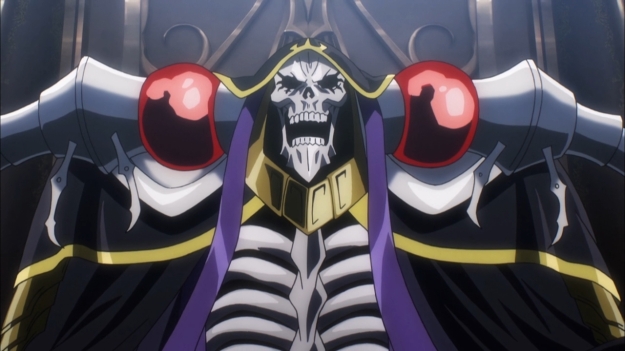 — Well, this is awkward. But honestly, this scene is legitimately pretty funny.

— And just like that, I’m back to being bored with this show. Whenever Overlord shifts its attention away from its titular character, it just can’t keep my attention.

— …zzz. This is why I stopped giving Overlord its own post every week. I just don’t give two shits about Enri or Nphi.

— Why did I stop following this series closely? I dunno, I guess I just kinda kinda lost interest. Not all of my interest in the story, but a good chunk of it. Since Steins;Gate 0‘s ideal outcome is an ending that we’ve already seen, I can’t help the fact that I’m just not as emotionally invested as I should be.

— Yeah, I know, I know… this Rintaro won’t get the same ending as the other Rintaro. So don’t I want to know what will happen to this Rintaro? Eh, not really. Even after fourteen episodes, he still doesn’t want to time-leap. I don’t really feel like rooting for him anymore. I’ll still watch the show, but not as closely. I don’t really care if I manage to unravel Steins;Gate 0‘s mystery before the show does it for me.

— Plus, a lot of the show’s initial draw for me was the potential relationship between him and Amadeus. What can I say? Stories about humans interacting with AI always fascinate me. Unfortunately, this never really panned out in Steins;Gate 0. Maybe it can still happen, but at the moment, Rintaro’s keeping a very healthy distance between him and that simulacrum of Kurisu. What a shame…

— Still, this episode isn’t without its juicy revelations.

— For instance, it turns out Kagari was brainwashed long before she even went back in time. Dun dun dun…

— And who might be the bad guy? It’s gotta be Leskinen, right?

— Last but not least, Maho will return to Japan to build a time leap machine for Daru and Suzuha. Yay, at least someone’s finally going to do it.

— As a quick aside, the female characters look so top-heavy with their super thin legs and giant boobs.

— But yeah, I was never in love with the original Steins;Gate to begin with, so I knew from the start that I’d probably lose my interest in Steins;Gate 0 eventually. I still tried to blog the show, because 1) it’s popular and 2) there was a small chance that I would like it? But in the end, I gotta relegate it to the “Everything Else” pile. Forcing myself to vomit up 1000 words every week about shows I don’t like is a fast way to burn myself out.

At first, the atmosphere in the dark and scary cave made the episode feel kinda spoopy. Then when Akane abandoned her friend again, it got kinda sad. But in the end, the above happened, and I just couldn’t take the short story seriously anymore. That’s not scary; that just looks dumb. The only reason I’m even watching this at all is because it’s horror.

Just for shits and giggles…

Next week, I’ll try to dig up some fansubs for Back Street Girls. I doubt it’s any good, but I may as well give it a shot. I also had initially planned to cover Aguu Tensai Ningyou before the season started, but for some odd reason, this show hasn’t garnered any interest. I think someone just subbed it, but only one episode so far. Due to time constraints, I couldn’t squeeze it into this week’s post, but maybe next week’s…