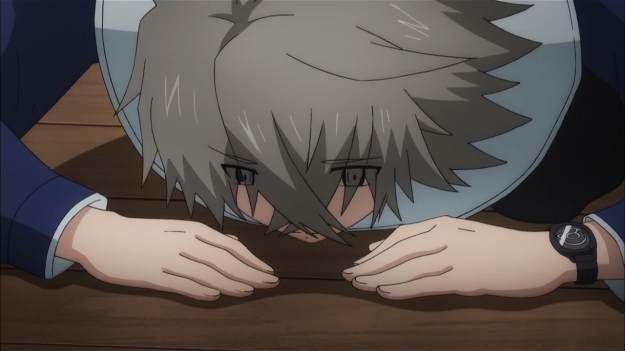 Why am I blogging this show? Well, I don’t really know what else to blog on Friday nights. None of the shows that aired today are honestly all that interesting to cover. It’d be cool if Netflix would let me watch Sirius the Jaeger like normal, but because we’re dirty gaijins, we can’t have nice things. Instead, I just have to hope that fansubbers can spare enough time out of their busy days to help me understand my Japanese cartoons. So whatever, I choose you, Dude of Red! You can fill up my second time slot on Fridays! For now, anyways. Maybe I’ll do a different show next week.

— So after last week’s cleave-o-rama, Chihiro now has this gaping wound in his chest. Ow, my heart. But where’s the blood, you ask?

— And all of a sudden, Chihiro can defeat the ogre no problem.

— So the bad guys weren’t trying to awaken Chihiro’s hidden powers. In reality, they just wanted to kill him. They had hoped that Kotetsu’s dad would’ve finished the job, but they were dead wrong. Here’s the thing, though: if Chihiro is so important, you’d think the bad guys would just take matters into their own hands. Kill him instantly before he can transform, y’know? Surely, these two can fight. I know Yuri definitely can. But I guess this would make too much sense. We’d better just turn random people into generic trash mobs instead. Oh no, the hero is now farming them for experience! What do we do! 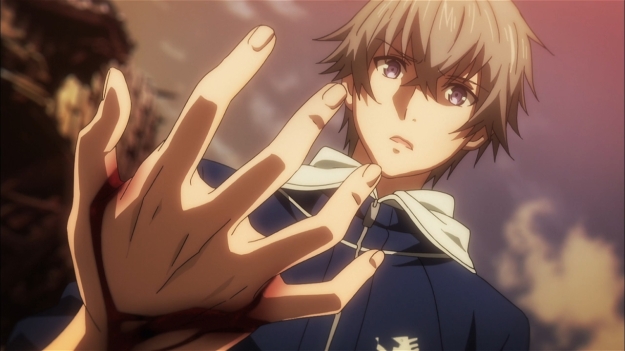 — After the deed is done, Chihiro’s eyes go back from red to its original color. This shows us that he wasn’t in full control of himself when he killed his best friend’s dad. I always hate this trope, because what’s really the point? One he realizes what he’s done, he’s still going to feel super guilty that he killed someone. I guess all this accomplishes is that it keep the audience from turning on the main character. We can’t blame Chihiro for his actions, because they weren’t really his, I guess. I still think it’s lazy writing, though.

— Oh look, this has happened before to Chihiro. But if you expect any answers from the show, think again.

— As our hero is going nuts, this girl quickly runs forward and uses her “talk-to-the-hand” technique to calm Chihiro down. Odd. Whenever I try that on my girlfriend, she just gets mad at me.

— Meanwhile, the dead ogre finally turns into more red mist, leaving nothing but a convenient pile of black ash behind.

— What I find odd about this scene — actually, this whole episode in general — is how Kotetsu never really gets all that worked up about his father’s demise. Like dude, your dad is dead. Aren’t you broken up about it? Don’t you care? He kinda does at one point near the end of the episode, but definitely not as much as Chihiro.

— The police finally arrive, but like in every other story, they always get there too late.

— The girl, now formally introduced to us as Eiko, convinces Kotetsu to tell the police nothing. So the police show up, look around, and walk away empty-handed. Great. 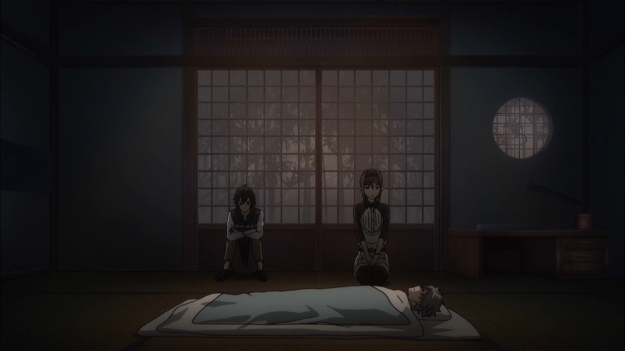 — Afterwards, Kotetsu wants some answers from Eiko, but the girl is not forthcoming. She says, “I’ll tell you later,” but guess what? She’s lying. Eiko then adds, “I’m sure the master would like to know, too.” Guess what again? The master, a.k.a. Chihiro, would like to know later, but as you’ll soon see, Eiko will proceed to tell the two boys nothing. And that means we, the audience, understand nothing.

— In Chihiro’s sleep, he sees an unsettling dream. Don’t you hate it when a girl stabs you in the gut, so you retaliate and stab her back, and she has the audacity to get mad at you? Ugh, the nerve of some women!

— When he finally wakes up, he checks to see if his gaping wound is still there. Ah, good, nothing but rock hard anime abs.

— Unfortunately, our hero soon realizes that he had killed his best friend’s father. Oops.

— See, I don’t understand the decisions behind a lot of these scenes’ compositions. For instance, why would you obscure Eiko like this? What purpose does this serve? Let’s deliberately block her with a bamboo tree!

— The next morning, the boys wake up to a table full of delicious breakfast. Eiko also continues to refer to Chihiro as her master. Why? Don’t ask. She won’t tell. But hey, you traded in an old man for a young, dutiful girl! Win-win!

— Again, the composition of these scenes are terrible: 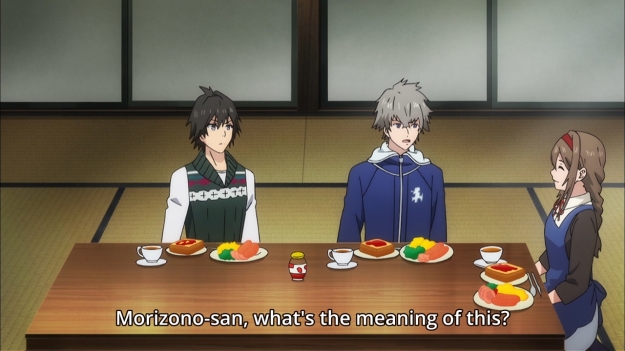 — But yeah, Chihiro wants some answers, but the girl is staying mum. The time’s not right, she says. Great. We’re halfway through the second episode, and we still don’t really understand what’s going on in this anime. Red mist? Shrug. Weird dudes targeting Chihiro for some reason? Shrug. Chihiro’s missing memories? Shrug. Bells turning people into monsters? Shrug. Chihiro’s hidden powers? Shrug. Mysterious people targeting Chihiro? Shrug. No answers. Nothing! And people are A-OK with that. It isn’t just Kotetsu who is oddly subdued. But we’ll get to that in a bit.

— Back to the composition of the scene, how does this work? How can Kotetsu position himself between these two when he was sitting at the table like this just earlier? Did he somehow slide over to the other side of the table?

— Later in the day, Chihiro fully succumbs to his despair. He can’t believe he just killed Kotetsu’s father. The old man was like a father to him too, so that makes it doubly bad! But hey, I’m not making fun of Chihiro, because I think his reaction here is pretty realistic. This is how you’re supposed to act when someone important dies, especially at your hands. This is why I don’t understand Kotetsu’s relative calmness at all. It’s like he doesn’t care.

— There is one problem with Chihiro’s reaction, though. It’s that the story didn’t even bother to milk the tragedy for all that it is worth. They didn’t have the ogre turn back into the old man’s human form or anything like that. They didn’t even have the old man regain his identity at the last second just to drive home the fact that he just got killed by someone he took in. He simply died without any fanfare. The story can’t even jerk our tears correctly.

— Eventually, Eiko drags the two boys to school, because life goes on. We thus get to see that the campus is teeming with activity. I don’t understand how there isn’t more widespread public panic. This weird ass gas just knocked out an entire metropolis full of people for at least a week! Tens of thousands of people have disappeared. And yet, everyone’s going about their daily lives as if nothing’s changed. 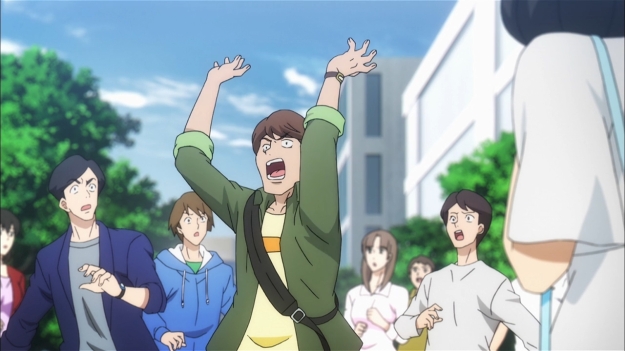 — Anyways, a random dude goes nuts, so Eiko warns Chihiro to stay away. Basically, normies are always in danger of turning into monsters.

— Chihiro and Kotetsu ask the sensible question: why the hell are we here? Is this really the time to go to school? Eiko thinks she’s giving them a practical response, but she’s not. She’s actually rather cruel about it: “…then what is it the time for? Staying at home and wallowing in regret? Wearing yourself out over pent-up emotions?” You heartless woman! Someone’s dad just died! But hurr hurr, fuck your grief and mourning! We’re anime characters, so we gotta go to school!

— Eventually, Chihiro is lured away from his friends by Yuri shaking a pair of bells. I bet you she could also lure him by shaking other things. But ahem, for some reason, this results in a pointless chase scene. I guess she needed to drag him to this exact location.

— Finally, the bells begin to turn these random jobbers into monsters, but Yuri loses her resolve at the last second. Chihiro is begging her not to complete their transformation, so I guess she feels bad? The mysterious dude in sunglasses from before, however, shows up and finishes the job. ‘Cause death to the Heroic League or something. More generic mobs to level up on.

— When Eiko catches up to Chihiro, all she does is beg him to remember. But do you realize how pointless that advice is? Why won’t you remember what you’ve forgotten?! Just remember what you can’t even think to remember! Gee, lemme get right on that…

— At first, it looks as though Kotetsu might turn into a monster as well, but nope, he also has magical blood powers running through his vein. And guess what? Now he’s mad about his dead father. This conveniently gives him the motivation to go after the mysterious dude in sunglasses.

— Kotetsu tries to chase the mysterious dude in sunglasses down, but he eventually meets his match against… this thing. He obviously needs Chihiro’s help, but our hero is still in shock. He doesn’t want to fight, he doesn’t want more blood on his hands, yadda yadda yadda.

— So when Kotetsu gets hurt, all our hero can do is do the generic anime scream. End episode.

— Oh boy, that was a long write-up, because I ended up practically bitching about every single aspect of the plot. Next week’s episode will have to provide some answers, right? Because I can’t see how this one-cour anime could afford to keep us in the dark any longer.

3 thoughts on “Dude of Red: The Red Dude Ep. 2: We still know nothing”