In this week’s episodes, Class 1-A learns that there are downsides to being privileged UA students.

— But first things first, let’s talk about how My Hero Academia is such a tease. As Hatsume gushes on and on about how she can help Deku become a better version of himself, Uraraka looks somewhat unhappy off to the side. Unfortunately, she’s too young and inexperienced to articulate what’s bothering her.

— It’s obvious, right? Deku had a problem, and Hatsume helped him solved it. It’s not a love connection, but it’s a connection. They now share something just between the two of them. It’s only natural that Uraraka feels a bit of jealousy. She couldn’t help him in that way. She didn’t even think of helping him in that way.

— I doubt she really has anything to worry about, though. Hatsume looks like she’s too fixated on her inventions to really bother with love.

— Anyways, shortly after saving All Might, Deku looks up at Bakugo with some trepidation. The latter looks pissed off as usual. It’s like walking on eggshells around the guy. Deku always has to worry that his actions will set his former friend off. It’s ridiculous. This has all the signs of an abusive relationship, because we’re watching a shounen, we just have to tell ourselves not to take it seriously.

— As for All Might, he’s coming to grips with the fact that he’s now someone who has to be protected. This happens to everybody, of course. It’s part of growing old. In theory, we take care of others, then in our old age, society takes care of us. Unfortunately, things don’t always work out that way. 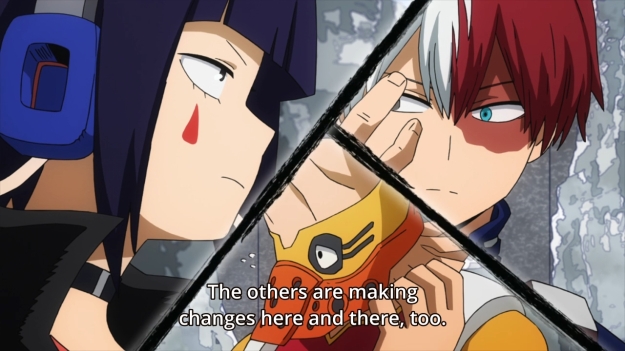 — Every student has made modifications to their outfits. We won’t go over those changes now, though. Maybe during the exam.

— Again, the story reminds us that the exam has a 50% fail rate. But we soon learn that the students have to go up against other students. So yeah, it kinda makes sense why so many people fail.

— I like seeing some of the girls change up their hairstyles if only for one scene. It makes them seem more realistic. People change their looks up all the time, but you wouldn’t know this if you watch anime.

— Anyways, Uraraka is still in a funk over Deku, and her friends pick up on it. She’s so inexperienced that she flat out admits that she’s in love. She doesn’t know it’s love, though.

— Ashido’s teasing is enough to send her flying.

— …which only gives her the perfect opportunity to watch Deku study and practice his new moves by himself in the courtyard. I was hoping he would turn around, notice Uraraka, and smile at her. She probably would’ve freaked out for our amusement.

— But yeah, MHA a tease. ‘Cause honestly, aren’t these just bread crumbs? I’ve done this long enough to know that nothing will happen between these two for a long time. I’m just being led by a carrot on the stick. Keep watching! Keep going! Maybe they will confess their love to each other! Maybe!

— I would love to see a full-blown romance in a shounen series. Not at the very end, but in the middle of the story. Why? Because love is relatable. Sure, you can fight for justice. Intellectually, I know that justice is important. But it’s not the same as love.

— Let’s say Deku gets with a girl — Uraraka, Hatsume, or even Toga if you feel like walking on the wild side — it becomes all the more tragic should something happen to either of them. Bakugo got kidnapped, and I was just like, “Yeah, whatever, let’s save him, because we’re heroes.” All Might nearly lost, so I said to myself, “Oh no, our symbol of peace.” But in truth, my heart wasn’t really in it. Now imagine Deku and Uraraka getting together, and she had to watch him get his ass handed to him on TV or something. Now you’ve got my attention.

— And hey, I’m only speaking for myself. I like romance, because I think it lends a certain amount of weightiness to the story. It adds an extra dimension — an extended purpose, if you will. And yeah, I’ve said before that it’s kinda foolish to hook up if you intend to be a hero, but that’s what makes it all the more compelling. Humans are emotionally fragile creatures, so they can’t help but lean on others. And in doing so, they only make it easier for their enemies to target their weaknesses.

— But enough about that, ’cause it’s now the day of the exam.

—These kids apparently come from a school that rivals UA. So yeah, Deku could’ve easily pursued his education somewhere else. That would’ve been neat to see. Not only that, UA has been screwing up a lot lately. You could argue that it has already been surpassed. The only reason to stick with UA is if you particularly favor their instructors over another school’s, which is unfortunately very true in Deku’s case.

— Still, at least UA does have rivals. I always hated how Totsuki Academy was the only culinary school worth a damn in Food Wars! As a result, we have a nonsensical arc where the kids act like their lives are over if they get expelled. It makes even less sense when you realize that the best chefs must necessarily travel the world to experience all sorts of cooking. But hey, this isn’t a Food Wars! post, so I digress. 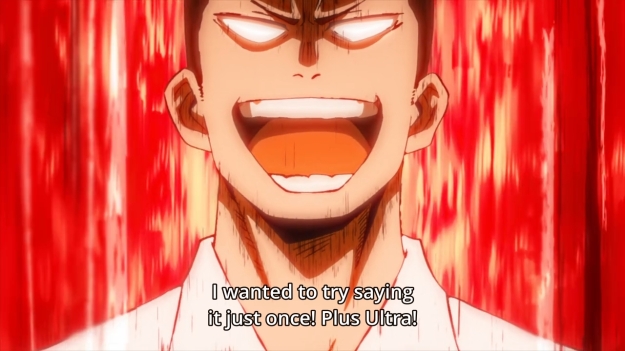 — This dude is real stronk, you guys.

— This lady then walks up to Aizawa and starts flirting with him. Her name’s Fukukado, and she’s mostly teasing him, but…

— Apparently, Fukukado’s superpowers revolve around her shitty jokes. So all you have to do is wear earmuffs in order to counter her?

— Oh no, it’s me! A bigger, goofier-looking version of me!

— As the students prepare themselves for the exam, Fukukado realizes that Aizawa hasn’t told Class 1-A about something super important. Unfortunately, she won’t tell us what that something is either! I guess the audience is in Class 1-A too!

— Look at all these people stuck in one room. This has to violate some safety codes…

— Due to recent events, the exam is even harsher than before. That’s right, only 100 people will pass the first test. I mean, I guess it’s okay to fail. There will be other exams in the future.

— The first test is like extreme dodgeball. You gotta hit your target in three very specific areas. 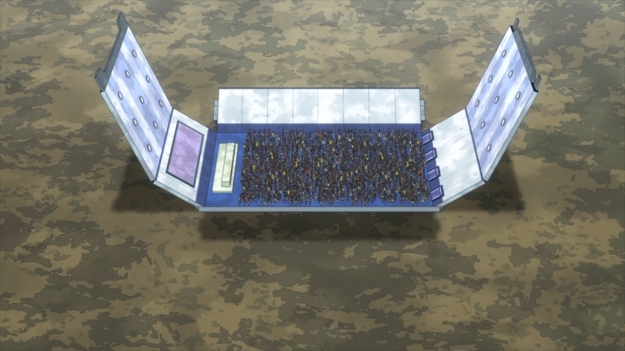 — Eventually, we get to see the rest of the playground, but it’s still kinda looks silly.

— Deku quickly realizes that everyone else already knows his and his classmates’ strengths and weaknesses. As a result, he advises them to stick together. But of course, Bakugo and Todoroki are too cool for school. Kirishima also goes wherever Bakugo goes, so 1-A is already three man down.

— But let’s get back to that. That is this: at the start of every exam, the other schools will team up to take UA down. Like I said, all’s fair in love and war. I mean, they already have bad guys teaming up to take them down. This is nothing compared to that.

— As our episode comes to a close, I have to really wonder if the story will somehow try to squeeze all 20 members of Class 1-A through this provisional exam. I hope not. Can’t we have Mineta fail or something?

— On the plus side, at least things are getting exciting again. All the training stuff was putting me to sleep.

— I can’t help but imagine, however, that the League of (Terrible) Villains will somehow try to crash this party. I don’t know how, but you never know. They have the tendency to show up at inopportune moments. It’s not that I ha-…. naw, who am I kidding? I hate the League of Villains. They really suck as bad guys.

— And now, your moment of zen: