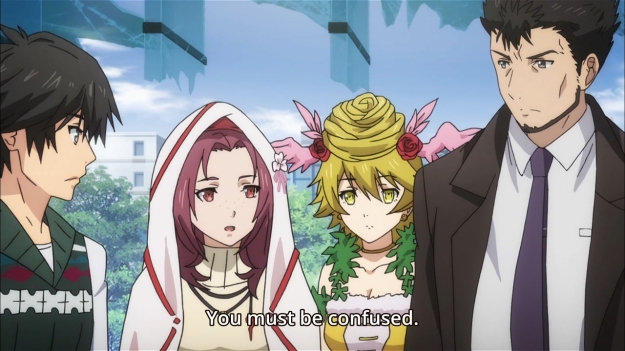 We finally get some answers this week, and I kinda wish I didn’t.

— In order to protect Kotetsu, Chihiro finally transforms. He proceeds to have no trouble defeating the big, bad winged demon. After all, he’s the hero.

— The fancy transformations don’t end there! Y’see, you’re either “Blood Vessel,” which means you can use your blood to become powerful warriors or whatever, or you have the potential to become a vessel. Whenever the bad guys turn people into demons, what they’re really doing is turning them into familiars. But there are good familiars and there are bad familiars. Well, good and bad might not be correct terms to use in this case. Let’s call it lawful versus chaotic. Chaotic familiars turn into demons, apparently. On the other hand, lawful familiars still retain their human appearance. For instance, Eiko has long ceased to be Eiko (we’ll get to this in a bit). She’s really Chihiro’s trusty familiar Cerdid. When did he get a familiar? Well, let’s not forget that he has a rather colored past. We just don’t know what that past is just yet.

— Okay, so by calling Cerdid’s name, she can fully transform into her true self. But she already knows who she is. I don’t really understand why he had to call out her name. She acted like his familiar right from the get-go. Ah well.

— Cerdid’s a healer, I suppose? She’s able to to cure Kotetsu of his poison. Meanwhile, the mysterious man in sunglasses refers to Chihiro as Yuri’s beloved. Oh boy.

— After Diabolos, the chaotic familiar has been defeated, our hero gets all angsty again. I killed another person! It doesn’t matter if they turned into a murderous demon! I still killed someone! It doesn’t help either that this nosy reporter starts piling onto him. 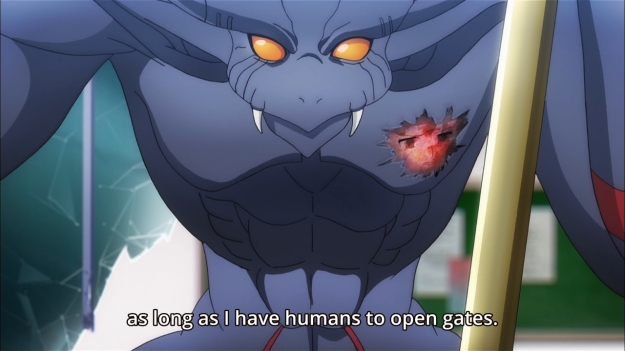 — Then to make matters worse, the mysterious man in sunglasses summons Diabolos again. As long as he has humans around him, he can keep turning them into demons. Not only that, the process is apparently irreversible. Hah, what a shitty world.

— At the very start of the episode, Chihiro had transformed because he no longer wanted to lose the people closest to him. But now that he’s all emo and shit, he just stands there and takes the enemy’s hit. So… it’s okay if he loses the people closest to him now? My point is that it’s just hard to sympathize with someone who lacks conviction. Once you make a decision, try to stick with it.

— Luckily, like any shitty story ever, the hero can simply go into berserk mode. He no longer has control of himself, but this gives him a reason to fight back.

— Meanwhile, the reporter’s assistant is not doing so hot. Apparently, she’s about to turn into a familiar as well. Out of nowhere, it is revealed by yet another new face that the reporter can also awaken as a Blood Vessel. Not only that, his reporter can become his familiar. Therein lies the problem, though. If he summons forth his familiar, it replaces the original person completely. His assistant becomes Aero. Her old personality is gone. She simply looks like her old self, but it’s a whole new person. Wow, this world sucks even more than I could imagine!

— So Chihiro destroys Diabolos again, and this time, he goes after the mysterious man in sunglasses. Unfortunately, Yuri gets in the way. Seeing her oppose him, our hero suddenly gets a vision of what’s to come. As a result, he loses his mind. The bad guys use this opportunity to slip away when they could just kill him while he’s holding his head and screaming in pain. I mean, that makes sense to me, but I guess bad guys aren’t allowed to be smart. 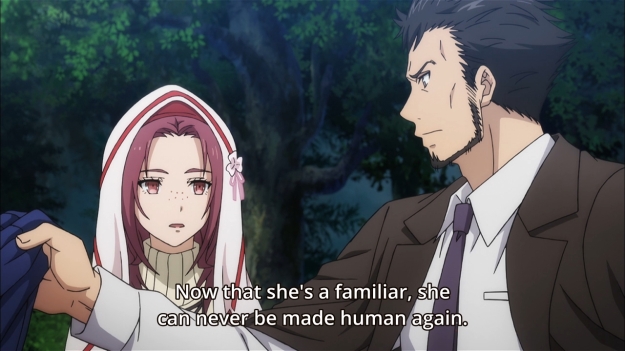 — In the aftermath, the reporter dude (I’ll remember his name one day) gets pissed off at Chihiro. He blames the hero for his assistant becoming some weirdo familiar. But dude, you kinda have what is ostensibly a JRPG summon now. What are you complaining for? Oh right, right, your dear assistant…

— Some dude is caught mid-transformation. Now he’s half man, half furry. Whoops.

— Anyways, the lady who kinda looks like a nun drags all three Blood Vessels to her church. Church? Hoo boy… aren’t churches usually evil in anime? The masked lady from Chihiro’s dream shows up and proceeds to infodump on us. Yeah, her name is Dux. She proceeds to tell everyone that the world will soon be destroyed in 40 years. If the Lord of Vermilion awakens, then he can forge a new world from the ashes of the old one. A new world forged with hope! Otherwise, existence will succumb to chaos. And unfortunately, our bad guys are the Agents of Chaos! Oh no! Hope or chaos? We gotta choose hope, right?

— We suddenly cut to the bad guys, and they’re the direct opposite of the good guys. Instead of a church, they’re in a laboratory. And they don’t believe in either hope nor the destruction of the world. Rather, they think they’re preventing it. And they hope that they can do so with science.

— Thanks to the Great Collapse, it is possible for creatures from other worlds to enter ours. It sounds like the bad guys are using this in order to combat the good guys and take out the Blood Vessels. So it’s common sense, right? Destroy Tokyo and creatures won’t be able to appear anymore! On the other hand, Blood Vessels will still be Blood Vessels. They should technically retain their powers? Don’t quote me on that. 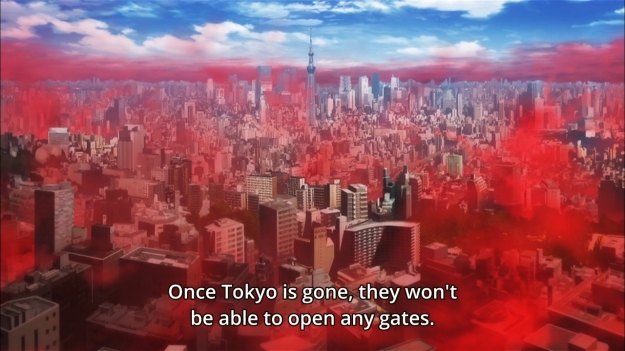 — At this point, however, you might naturally be thinking, “Hey, the bad guys don’t really seem like bad guys. And the good guys don’t really seem like good guys!” I agree! ‘Cause honestly, we really don’t know what this new world is all about. It might be a shitty world under the rule of some so-called benevolent god. What was so bad about this world to begin with? Why do we have to start anew? But this is where Lord of Vermilion: The Crimson King suddenly starts to remind me a whole lot of Shin Megami Tensei. In SMT, demons are able to invade Tokyo through a rift in the world. And in SMT, the hero must choose between three alignments. He can either side with God or with Lucifer. You’re essentially choosing between order or freedom — law or chaos. Sound familiar? Hmmm.

— In SMT, there’s also a neutral path. And often times, the neutral path is heralded by fans as the canon path. ‘Cause, y’know, you’re shunning both extremes and choosing to put your faith in humans, balance, yadda yadda yadda. Right now, it doesn’t appear as if there’s a neutral path for Chihiro to take, but we’ll see. I can’t imagine him taking Yuri out and destroying this world for a new one. But at the same time, the bad guys are bad because their methods are questionable. Defending the world is one thing, but did you really have to turn people into demons?

— Afterwards, the three Blood Vessels return to the university to find that Aero now looks like the reporter’s old assistant. But again, that woman is gone. Aero is still Aero. So when a familiar takes over a body, what happens to the human? Nobody really knows. Cerdid simply insists that the process is irreversible. We’ll see, though.

— In the meantime, however, the reporter blames everything on Chihiro. Although he is a Blood Vessel, that doesn’t mean he automatically becomes the follower of the church. Instead, he’d rather get his revenge on our hero. So great, now he’s got yet another person after him. 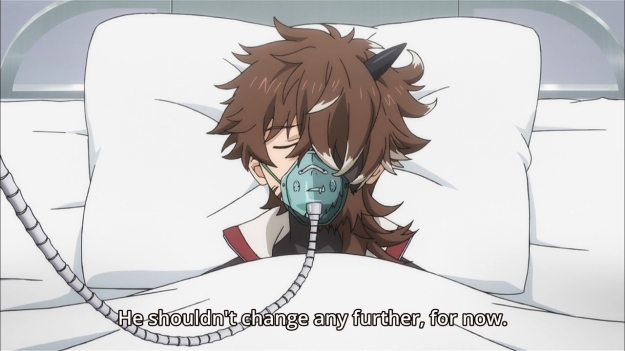 — Chihiro finds out that his buddy Ikuro won’t continue transforming into a familiar, but at the moment, he’s gonna be stuck like this. So what’s up with people turning into familiars anyway? Why does that even happen? Well…

— No, nobody thinks that. We haven’t thought that since mind-body dualism was debunked.

— It is further explained to us that not everyone has the potential to become familiars. If your spiritual connection or whatever is too weak, you simply turn into red mist.

— So Chihiro feels bad even more. Oh no, everyone is either dying or turning into freaks because of me! It’s all my fault! So Dux suddenly invades his mind and starts mentally torturing him some more. Oooh, you’re a bad man and you’ve done bad things! You may as well make the best of it and craft that new world for us! Nothing shady about that!

— At this point, the show has some major problems. The animation, of course, is half-assed. Our hero is one of those “EVERYTHING IS MY FAULT” dudes, so we’re going to have to suffer his whining for probably at least half the season. Then even when he figures himself out, he’s going to have decide what to do about Yuri. I just don’t see how this can be executed without falling into a mess of cliches. Last but not least, the overall story is, like I said, a poor man’s version of SMT. Not looking too hot, boys. Not looking too hot. And after all that I’ve learned from this week’s episode, I’m having a hard time rooting for the so-called good guys. Yeah, demons are bad, but when’s the last time you could actually trust a church to do you right?