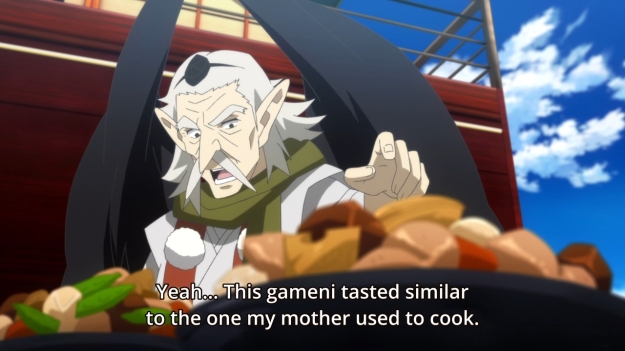 Just cook good food for him! Hahaha…haha…ha… But seriously, this has to be the most ridiculous episode yet. Every week, I keep thinking there’s no way that this show could possibly top itself, but it manages to surprise me each and every single time! It’s amazing, really!

— Last week’s episode ended on a cliffhanger. Aoi was spending some quality time with Odanna when an explosion went off at Orio-ya. She hurries back only to see Hattori and Matsuba quarreling once again. What’s worse is that the old man always ends destroying other people’s property when he gets pissed off. You’d think he’d be a little more mature in his old age, but nah! So what’s the problem now? Well, Hattori had asked for the tengu’s secret liquor, ’cause y’know, he needs it in order to prevent the entire southern region from dying. It’s one of the special items required for the ceremony. Unfortunately, he can’t tell Matsuba why he needs the liquor, which I find very bizarre. Hattori had no issues telling Aoi all about the ceremony, but he can’t tell his own father? Hmm.

— Ranmaru quickly shows up to smooth things over. Y’know, just give Matsuba a new room and other neat perks. The old man’s an asshole, but they still need to appease him for now. They still need to get their hands on that secret liquor. God, it better be the best damn liquor ever. As always, it’s up to Aoi to solve the tengu conundrum. Of course, she’s going to do it with food.

— So what’s up with Hattori and Matsuba anyways? Why does the old man hate his own flesh and blood so much? Well, y’see, he’s always been a shithead. No, really.

— One day, he settled down and married the woman would eventually give birth to Hattori. But did Matsuba become a good father? Heeeeeell no. In fact, he’s an abusive asshole. We’ve seen in past episodes that the old man liked to drink himself silly, so it wouldn’t surprise me if he was an alcoholic. And of course, the show never brings it up, but considering how he keeps threatening to beat his own son up, I bet he did beat his own wife. C’mon, don’t tell the thought hadn’t crossed your mind. Dads like Matsuba are sadly all too common.

— The saddest part is that Matsuba abused his wife over nothing. Nothing, man. The tipping point came when she tried to cook one of his mother’s recipes. It didn’t taste the same, so naturally, he flipped his shit. Yeah, that sounds like an alcoholic. No person of sound mind would get so mad over a dish not tasting the same.

— And when Hattori tried to defend his mother, Matsuba got physical with his own kid. So yeah, I bet you anything that he put his hands on his own wife too.

— To be fair, this is Hattori’s recollection of past events, so it’s potentially biased. But at no point in this episode do I see any reason to think that Hattori is exaggerating.

— Anyways, to get back at his father, Hattori stole the secret liquor and sold it. As a result, he was expelled from his family. When his mother eventually got sick and died, he wasn’t allowed to come back and see her one last time. Nice. She probably died because her husband is a drunk, wife-beating loser. 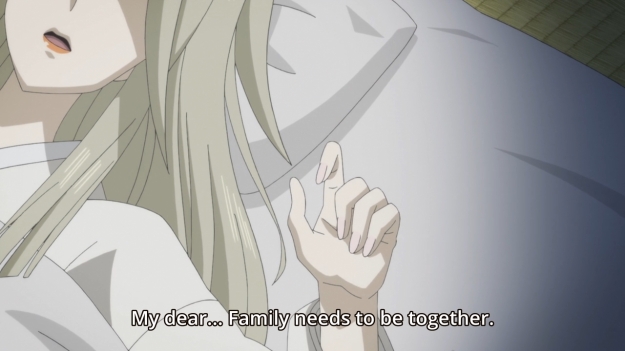 — Nevertheless, she always insisted that family had to stick together. That’s probably why she never left Matsuba even though he was setting a terrible example for his children. I mean, this is exactly why kids grow up to become abusers. With their young, impressionable minds, children can’t help but normalize the domestic violence that they see between their parents. Ideally, Hattori’s mother would’ve left in order to protect her children. But y’know, faaaaamily. Bloooooood. We gotta stick togetheeeer. Pfft, whatever.

— Aoi goes to visit Matsuba, and she hears him confessing to himself in his sleep that he was wrong. That he drove his own son away out of pride. That makes it even worse. He knows he’s at fault, but his arrogance won’t let him fix any of his problems!

— In any case, our heroine wants to mend the relationship between Matsuba and his son. Why? Because she doesn’t even get the chance to reconcile with her mother. As a result, it would be a terrible shame in her eyes if these two men continued to quarrel. Eh, I disagree, but whatever. She’s running high on emotions right now.

— Later that night, she notices furry Ginji zipping across the sky. He’s been completely absent from the story in the last couple of episodes. He’s busy gathering stuff for the ceremony like a good boy. 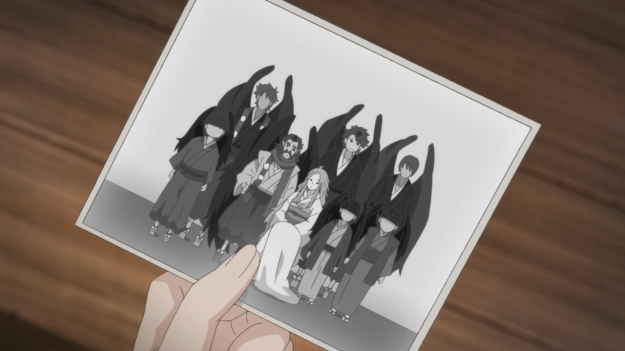 — “Should we draw in the other family members’ faces? It shouldn’t take long.”

— Aoi has a plan and it involves cooking. Not only that, Odanna is eager to help out in the kitchen. He’s been dying to, actually. Back at Tenjin-ya, his servants wouldn’t even let him go near the kitchen.

— But say, what happened to Ai? Y’know, the Aoi clone. No, really, where is she?

— Aoi’s going to have Matsuba and Hattori eat on this boat. This way, if the old man flips his shit again, it won’t damage Orio-ya. That’s how sad it is. They have to treat that geriatric bird like child prone to tantrums.

— In the middle of cooking, Aoi suddenly hears that Hattori has gotten captured. By who? By his own old man, of course. Because Hattori is on this ship, Matsuba just assumes that his kid is here to steal the secret liquor. Good lord. 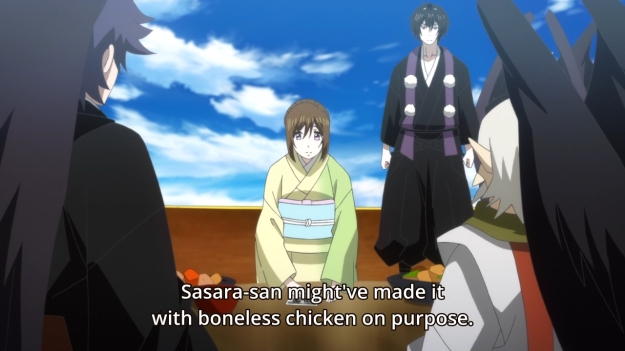 — Hattori’s mother’s version was made with boneless chicken. That’s why it tasted different. Are you serious? Are you really  serious? Matsuba flipped his shit over a dish having boneless chicken as opposed to bone-in chicken? What a fucking cun–…

— So why did she make it with boneless chicken? Why didn’t she just replicate the recipe exactly as it was written? Well, she didn’t want her family to choke on the bones. Ahahahaha, her useless husband is so immature that chicken bones were a danger to him.

— Unfortunately, Matsuba and Hattori end up fighting again. Why? Because like father, like son. And if father is a hot-headed loser, well…

— For some reason, Aoi starts feeling weak, so she ends up collapsing to the ground due to all this ridiculous feuding.

— Seeing this, Hattori gets down on his knees and begs once more for the secret liquor. Again, he can’t tell his dad why he needs it. He just hopes that Matsuba will trust him.

— Matsuba then looks up to the sky and confesses, “…the truth is, I had nothing against you…” Yep. Yeeeeeep. He drove his son away from years when he knew that he was truly at fault. Why? Eh. Blame it on alcohol. Blame it on his mental problems. Blame it on toxic masculinity. Whatever it is, he sucks.

— But in the end, the two birdbrains reconcile. In order for Matsuba to hand over the secret liquor, he must withdraw Hattori’s expulsion from the family. So I guess that’s that. The lesson here is that even if your dad is abusive, held a grudge against you for years, and probably drove your mom to die earlier than she should have, family is family! I am admittedly biased. I don’t put much stock into blood relations. If you’re a close friend, you might as well be family to me. On the other hand, if we haven’t spoken in years, I don’t give a damn what blood flows through your vein. I would never chain myself down to a toxic situation just because “family is family.”

— For once, Aoi doesn’t correct Odanna when he refers to her as his waifu. She’s all emotional, so she admits to herself that she probably wouldn’t mind being in a family with him. That’s still not romance, but it’s a start.

— But when one problem ends, another one begins. Even though things are all patched up between Matsuba and Hattori, this shady-looking guy watches Aoi from afar with keen interest. Oh boy.