Growing up, my parents watched a lot of those lame Chinese TV series. As a result, I’m used to the jiangshi looking like this:

They’re supposedly vampires, but they’re kinda lame most of the time. They can only move by hopping slowly towards you. Plus, they always gotta stick their two arms out in front of them. Somewhere along the line, Capcom decided to sex up the jiangshi with Hsien Ko:

Basically, just give her a huge rack and a boob window. But hey, at least she still attacks with her hands. Her hands have claws now, but that’s alright. Well, Hsien Ko ain’t got nothin’ on Toryo:

My boy has handguns, machine guns, bazookas, grenades — he ain’t yo mama’s jiangshi! He’s a John Woo action hero! Most of all, who needs big boobs when you have rock hard abs and Tomokazu Sugita phoning it in big time on a throwaway reverse harem series? Anyways, let’s cover the rest of the episode.

— So back in the day, Toryu was a wild boy. I forgot to mention up top that he even used a flamethrower at one point. Luckily, he was no match for Ton’s ancestor Sha Rijan.

— But in the present, poor Shinyao is still gallivanting around London with her little werewolf companion. She doesn’t seem to mind, though. I guess when you get kidnapped by a hot dude, it’s not so bad.

— Chris claims that he no longer wants to work for Haysin. Too bad the bad guy is watching his every move. Well, that makes Haysin sound competent, so I take that back. He really isn’t. He keeps trying to get his hands on Ton, but he constantly fails each and every single time. He’s gonna fail again this week, too.

— Speaking of Ton, she’s been hitting the books pretty hard. What books? Beats me. Sha Rijan’s stuff, I guess. Books full of Chinese spells or something. If she’s going to hang out with these bishies, she’s gotta unearth her true potential or whatever.

— At one point, Toryu starts getting on the girl’s case. Why? ‘Cause she has her spoon in the mouth like this. ‘Cause she put her hair up in a silly way (not really). ‘Cause she’s wearing a tracksuit. Basically, he thinks she should be more dignified like Sha Rijan. I think he needs to get the stick out of his butt.

— Like a lot of heroines in reverse harems, Ton is conveniently clumsy when she needs to find herself in the arms of a bishie. As a result, she somehow manages to fall off of her stool. This forces Toryu to gallantly catch her before she hits the ground. So y’see, even though he just negged everything about her appearance, it’s okay. He cares. He wouldn’t have caught her if he didn’t.

— He even cut his hand up and covered it in vanilla ice cream and coffee! All for her!

— But wait, he literally calls himself a tool. As a result, she doesn’t actually need to treat him like a person. Just treat him like dirt. So… why should she give a shit what he thinks about her appearance?

— “Food and Tea.” Christ, I hope they actually serve edible food there.

— Even though it’s nighttime and the streets are completely empty, Toryu is gonna go shopping and Ton will tag along. The other two bishies aren’t too worried though. No girl would ever fall for a tool… right?

— They say they’re not jealous, but they still end up having Wayne possess a drone in order for them to spy on the couple.

— Wait, what’s that in the distance? Ah, it’s another one of Haysin’s hare-brained schemes. That’s right, killer birds.

— Like I said, the streets are completely empty. I’ve never seen London so devoid of people.

— More importantly, Toryu can whip out two handguns and fire them willy-nilly without alerting anyone’s attention. In London? In London?! 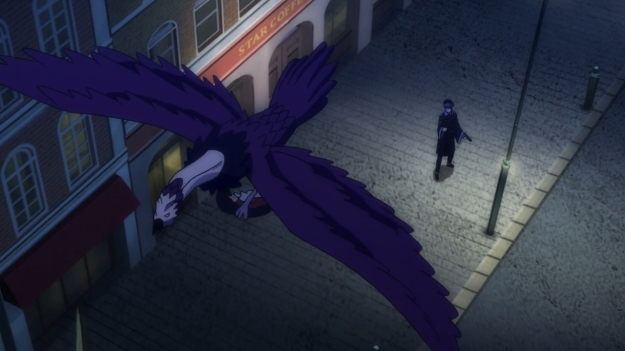 — At one point, a giant ass bird swoops in and snatches Ton. Toryu would help her, but the birds suddenly turn into needles and pin him down.

— Eat your heart out, Hitchcock.

— It’s a good thing the other two bishies were spying on them then! Luke somehow jumps high enough into the sky to swipe at the giant bird’s butt. One scratch is enough to turn the magical creature back into a pile of papers. Hm. As for Ton, Vlad catches her in her arms. He’s obviously the canon love interest.

— Once Ton is safe and secured, the boys turn their attention Toryu. Y’see, the only reason why Toryu isn’t some out-of-control maniac is because of a paper talisman that Sha Rijan had stuck on his forehead. Those birds were directly targeting said talisman.

— And without it, Toryu’s back to his old self. Yay, we can see his eyes!

— I just wanna know where he’s getting all of these weapons. Is he carrying them on him? Does he have magical bishie bag space?

— If handguns don’t wake this sleepy London “hamlet” up, surely a machine gun would! Right? Nah. The streets remain empty. The show wants to use London as its setting, but why bother?

— In order to save Toryu, Ton needs to prove that she’s been studying hard. By sticking her hands into walls or the ground, she can pull out all sorts of neat stuff. In the first episode, she dragged out those gnarly chains that Sha Rijan used to use as a weapon. Unfortunately, we only need a dinky talisman this week. 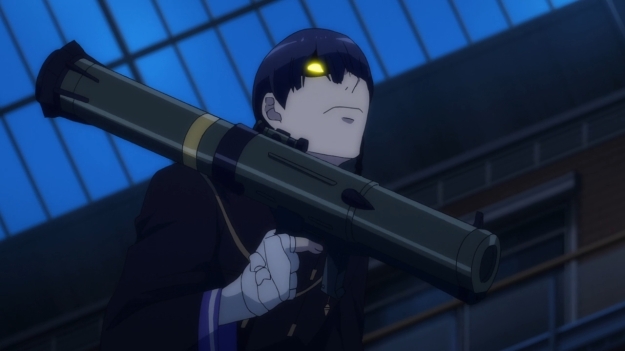 — Yes, Toryu pulls out a bazooka at one point. What’s truly dangerous here, however, isn’t his arsenal of weapons. Rather, Toryu will literally blow up if he keeps going. Yeah, sure, fire off as many bullets as you want in London. But don’t you dare blow up, mister!

— Luke manages to stick Ton’s talisman onto Toryu, but unfortunately, it doesn’t work. Y’see, you can’t just hide Toryu’s murderous nature. You have to change it. Once Ton realizes this, she pulls out another talisman, and this time, she’s going to take matters into her own hands. That’s how you tame a bishie. This talisman’s different, too. This one will give Toryu a heart.

— Apparently, Haysin created Toryu. Jesus, how long has this guy lived? Then again, he’s probably not human, and our phantom bishies have been around for quite some time.

— And with that Toryu is back to normal… kinda.

— The next morning, our jiangshi decides to get all fresh with Ton by kabedonning her against the lockers. Oooh, that’s hawt. Nothing like being wooed by an emotionless Chinese vampire who would otherwise blow up if some piece of paper isn’t stuck to his forehead.

— The rest of the boys soon show up, and together, they present Ton with a uniform for the cafe. ‘Cause guess what? They want her to be their manager. Wait, what? They’ve been running this cafe for decades (maybe over a century), but they’re going to hand the reins off to some girl who’s just been here for a week or two?

— Also, what about poor Shinyao? Do we still give a shit about her?