I don’t agree at all that Ton’s solution to Lydia’s problem is the most ideal outcome, but let’s start from the beginning.

— Shinyao is currently hiding out with Chris in an abandoned, derelict school. Nevertheless, her rescue is still not a priority as the story decides to explore other topics related to Umbras. For instance, can Umbras and humans ever fall in love?

— Back at the cafe, Ton has changed into her new manager’s outfit. Everyone showers her with compliments. Everyone but Vlad, that is. He’s too tsuntsun for that, so he would rather tease the girl. I think there’s something odd about the way he looks here, but this is probably just due to the show’s shoddy animation.

— Our heroine is eager to take on a part-time job, because she wants to pay for her own tuition. Oh yeah, she’s here for school. Too bad we’ve yet to see her actually attend a single class. Hell, Shinyao is also here for school. So much for that!

— In enters Lydia. She’s supposedly a beautiful woman, but I can’t really tell from this art style. Everyone kinda looks ugly in this show.

— Lydia is an Umbra who wants the cafe to find her a partner. I guess there isn’t really a Tinder for Umbra. She could use regular ol’ Tinder, but these characters insist over and over that it’s a bad idea for humans and Umbras to hook up. 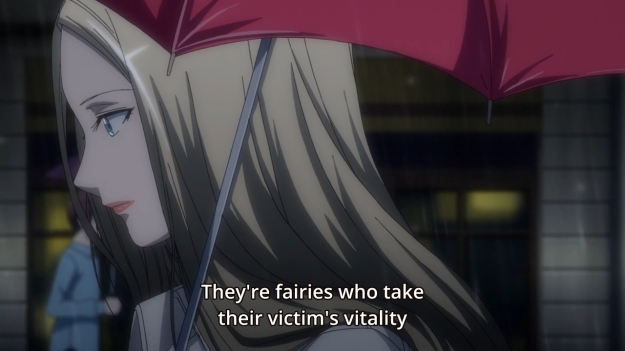 — Nevertheless, Ton immediately accepts Lydia’s request. It’s only after our heroine takes the job that Vlad decides to pipe up and voice his objections. What’s his problem? Well, Lydia is a leannan si. You can certainly hook up with a leannan si, but don’t expect to live very long. In return, however, she will be your muse. You will suddenly find unprecedented success in your chosen field. I mean, I guess if you want to leave your mark on history, this is not so bad.

— In any case, I don’t know why Vlad didn’t say anything earlier. If he knew what she was, he should have warned Ton ahead of time. But I guess we wouldn’t have ourselves an episode if things were that simple.

— And because Ton accepted the request, she’s going to have to carry it out… which is insane to me! Lydia literally cannot love another human without slowly killing them. So what’s the gang’s brilliant solution? Oh, let’s just find her someone who won’t die easily. Uh, what? Must be nice to gamble with people’s lives like that.

— So who do they want to be the poor guinea pig? The guys suggest Greg Gregory (what an unfortunate name), the detective. He’s reluctant at first, but he says he’ll drop by if he feels like it. When the day comes, Ton actually hopes that he doesn’t show up. Um, you know you could just pick up the phone and call the guy. But no, let’s not do that.

— Eventually, Greg and Lydia finally meet. She’s interested in him, but the detective instantly realizes that she’s an Umbra. He doesn’t know that she’s specifically a leannan si, but hey, humans can’t date Umbras so he gets up and walks away. Welp, that’s that.

— Meanwhile, the episode keeps cutting to this newspaper article about an artist being hospitalized. I get it, dudes. He was hospitalized due to Lydia. This isn’t exactly some major revelation.

— Wayne decides that it’s his turn to look for Lydia’s future lover. He does this by possessing a phone in order to look for hot dudes online. I don’t know why he can’t just use the phone normally, but hey, maybe the search is more effective if his chibi ass appears in it.

— Wayne eventually settles on, well, the same music artist that has been all over the news. Great, you’re going to partner up with someone she’s already in the process of killing.

— In the meantime, Lydia tries to make small talk with Vlad. He, however, only has Ton on his mind, so even though he’s talking to a beautiful woman, he still goes and insults Ton. All our heroine can do is make a face.

— But hey, here’s a thought: if Lydia can’t be with humans, why can’t see be with Umbras? That makes total sense to me, but maybe the population of Umbras is just too small for her to find any suitable candidates. I mean, how many hot Umbra dudes do we know? Chris has totally imprinted on Shinyao, so he’s out. There are the four guys at this cafe, but they all belong to Ton. After all, look at the girl’s face when Lydia starts flirting with Vlad. She’s even madder than before! This is my reverse harem, thot!

— All of a sudden, Roland Lee bursts into the cafe. Wayne sent him a picture of Lydia, so he immediately wants to go see her. We basically learn what we already know: she actually loves him, so she can’t bear to be with him any longer. If their relationship continues, he’ll die. Nevertheless, the guy is such a Romeo, he would trade his life just to be with her.

— Lydia storms off, and Ton chases after her. The leannan si begs our heroine to kill her, because in her mind, this is the only way to save Roland. Apparently, as long as the leannan si continues to love the guy, she will drain him of his vitality. This is why she was trying so hard to find another lover, but of course, you can’t just turn your heart off like a light switch.

— Ever the optimist, Ton suggests that she might be able to find a solution in one of Sha Rijan’s many books. There isn’t much time before Roland bites it, but hey, we want our happy feels, right?

— In the end, Ton is unable to find the perfect solution to the problem. When Lydia returns to the cafe, Vlad shows up with Roland in tow. Again, Roland doesn’t care if he dies as long as he gets to be with Lydia. Vlad apparently agrees with this, so he helped bring the guy here. This pisses both Lydia and Ton off.

— Vlad argues that some things are just more important than life. Y’know, like a man’s love for his woman, apparently. Ton replies that this is easy for him to say, because he’s an immortal. Hm, y’know, that’s not a bad comeback.

— Anyways, Roland chases Lydia into the rainy streets, so she tries once more to shoot him down. She accuses him of ignoring her feelings, and the last thing she wants is for him to die young. Ton eventually catches up to these two and summons forth this bracelet. And with it, Lydia suddenly starts glowing and fading away. Hm.

— We eventually see a new article about Roland in the news. He’s back and healthier than ever. More importantly, he’s now sporting a gaudy-looking ring. So what did Ton do? She transformed Lydia into a ring. This way, Lydia and Roland can be together forever.

— I don’t really see how this is ideal. Lydia didn’t want to be with Roland, because it would cost him his life. So the solution is to take Lydia’s life instead? Sure, she’s now a ring. But a ring can’t speak. A ring can’t tell you that it loves you. A ring can’t do anything. She’s effectively dead. The boys assure Ton that she achieved the ideal outcome for her client, but at the end of the day, you’re just flipping a coin. Either Roland dies in Lydia’s arm, or Lydia dies.

— Lydia never should’ve bothered if she wants to be such a goody-two-shoes. I mean, it’s not like her own nature is a mystery to herself. She knows she can only love by killing another person. So why did she bother falling in love in the first place?

— Ton wonders if it’s truly impossible for Umbras and humans to be together. Why would it be impossible? It’s only impossible for Lydia because it’s literally in her nature to kill humans if she doesn’t want to. But you can’t assume that her situation applies to everyone else.

— Anyways… Roland proceeds to sing us a sappy ballad about Lydia in the ending credits.

— After that, an old man shows up in London, and he’s got a bone to pick with our favorite vampire bishie. Why? Because the old man’s none other than Van Helsing.