Welp, this episode left a bad taste in my mouth.

— Ash returns home to see if he and his crew can find any clues about Banana Fish in his late brother’s belongings. Naturally, the hot-headed teenager can barely make it through a single day on this road trip without getting pissed off about something. He’s lucky that every single other adult in the car has the patience of a saint. They can also apparently sleep through anything. I would never be able to fall asleep on the back of a moving truck.

— Before he can gain access to house he grew up in, Ash needs to get the keys. That means seeing his old man again. Yep, Ash’s dad is still alive and kicking. By the way, Ash is only 17. That means he’s still legally a minor in the US. You can already tell from this alone that Ash’s father Jim is a bit of a deadbeat. Nevertheless, he seems to be in a relationship with Jennifer, also an adult with the patience of a saint.

— Right off the bat, Jim calls Ash a whore, and insinuates that the rest of the guys — Max, Eiji, Shunichi, and Shorter — are all fucking his son. You think that’s bad? Oh, just wait and see.

— By the way, Jim and Jennifer runs a diner in the middle of nowhere. The diner also appears to be constructed from wooden planks. How quaint.

— Also, Ash grew up in a house that just sits in the middle of nowhere. It doesn’t appear to be attached to a farm or anything. It simply overlooks the sea. Again, quaint…

— Ash reveals that he and Griffin are half brothers. Also, he has no clue where his mother has disappeared off to. Clearly, Jennifer is not his mother. Nevertheless, she drops by with food and supplies for the guys. Not only that, she tries to defend Jim. She must have nowhere else to go, because how else can you watch a man call his 17-year-old son a prostitute? 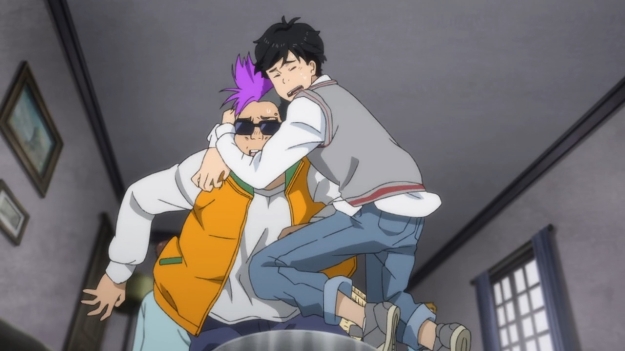 — Inside the house. Eiji sees a mouse and freaks out. Geez, dude…

— Eventually, they spot Abraham in one of Griffin’s old photo albums. They pretty much know where they need to go next: Los Angeles. I mean, they already kinda knew they had to head out west, but this picture leaves no doubt.

— Eiji gives Shunichi a pleading look, and the man assures the kid that they’re in too deep to back out now. Bullshit. Sorry, but they barely know Ash, and this Banana Fish thing has nothing to do with them. Shunichi’s a photographer, and Eiji’s still just a kid. They are in way over their heads.

— Ash ends up storming off, because he wants to leave right away. I think they should’ve listened to him. Why? Well, Shunichi wonders if Golzine would send his men all the way here. Why the hell wouldn’t he? Golzine literally runs an underground pedophile ring. Forget Banana Fish. Just the underground pedophile ring alone is enough reason for him to try and silence every single person in this room. Why on earth do you think he wouldn’t send some men to Cape Cod? If anything, these idiots have just needlessly endangered Ash’s family’s lives. Jim is a shithead, but Jennifer doesn’t look like she deserves any of this.

— The next morning, Ash teaches Eiji how to shoot a gun. Let’s just say Eiji sticks his butt out a bit too much.

— Shunichi eventually stops by to have a talk with Ash. The latter accuses the photographer of babying Eiji, and this is why the 19-year-old Japanese kid can’t protect himself. Well, y’know, most people don’t have to protect themselves from mafia kingpins. Just sayin’.

— Later, Shunichi has a talk with Max about his encounter with Ash. The man then reveals that he intends to take Eiji back to Japan with him as soon as they get to LA. I don’t know why he’s even bothering to wait that long if he’s truly concerned about Eiji’s safety. The longer he waits, the harder this’ll be. Hell, we know Eiji ain’t leaving. Not until the end of the series anyways. The running theme here is that dads and father figures are horrible at protecting the ones they supposedly love. Some, like Golzine, just straight up exploit their kids.

— The guys eventually drop by the diner to have some breakfast, but his dad continues to give him shit. Ash storms off as a result. Meanwhile, Eiji tries to confront Jim.

— I like how this newspaper has actual articles. They’re even written out and everything. On the back, you can see a story about disappearing children. Apparently, it can’t beat out a story about car doors not opening up properly. Or y’know, deep sea fishing.

— Jim launches into a big story about how Ash was raped by his own baseball coach when he was only seven. The guy was also a well-respected member of the community. Yes, that’s right. Ash has been sexually assaulted all through his life.

— The sob story doesn’t end there. When Jim tried to report the crime to the police, nobody believed the kid. They even accused the kid of seducing the guy. It’s hard to believe, but there are a lot of ass-backwards rural communities in, well, every country. People have defended rapists just because they can throw a football well. It wouldn’t surprise me if a small town refused to believe that a man had raped a kid.

— What’s unbelievable is that Jim started to turn on his own son. He didn’t try to protect him or anything. He didn’t even try to take the kid away from this shitty town. Instead, he left the kid to fend for himself, so eventually, Ash took matters into his own hands and shot his own rapist. He had turned eight by that point, so he endured the constant sexual assault for a whole year. 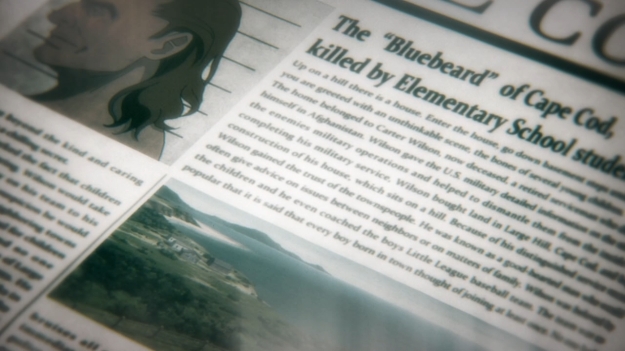 — Then of course, the cops found kids’ bones in the rapist’s basement in the aftermath. Jim even goes onto say that Ash wasn’t found guilty. Of course they didn’t, Jimbo! Who the fuck would even try him? No DA on this fucking planet would prosecute an eight-year-old shooting his rapist. The writer probably meant to say that no charges were even brought forth, but who the hell knows what the writer actually thought.

— Eventually, Jim tried to send Ash to live with relative, but the kid ran away only to be taken in by Golzine. Well, we all know what happened next.

— So like I said, Jim’s an even bigger shithead than we thought. He’s got no empathy for his son at all. He’s probably more offended by the fact that Ash allowed himself to get raped. He’s probably ashamed that his son was emasculated at the ripe age of seven.

— Nevertheless, Jennifer still tries to play peacekeeper. If I were in her shoes, I’d be disgusted with the man in front of me. God only knows what’s going through her mind, though. Maybe nothing. She was never meant to be a fully fleshed-out character.

— Anyways, shady men in suits have arrived shortly after the guys leave the diner. Welp, we all know what that means. Ash and his buddies should’ve left as soon as they could, but even if they had, Golzine’s men probably would’ve caused trouble anyways.

— When Eiji and Shorter go looking for Ash, they see the kid standing outside the diner. Inside the diner, Golzine’s men have taken Jim and Jennifer hostage.

— Max floods the diners with high beams from their truck. He then pretends to be the cops. In the commotion, Ash tries to fight back against Golzine’s men, but Jennifer ends up getting shot in the process. Two bullets to the chest. She ain’t surviving. Hell, she won’t even get to say her last words before she dies.

— Meanwhile, Jim also gets shot, but only once to his shoulders. That’s right, he gets to live. Eventually, Ash and Shorter subdue Golzine’s men.

— As police sirens can be heard in the background, Jim quickly wipes Ash’s prints from one of the handguns on the scene. He then tells his son that he’s impressed that the latter is willing to fight against a mafia don. Are you kidding me? Are you fucking kidding me? Jennifer is dead in front of you, and you’re smirking about your estranged son getting into deeper trouble with organized crime? All he can say about Jennifer is that the good ones die first. The good ones die first. That’s cold, dude.

— As a result, I suspect that Jim lost respect in his own son just because the kid got raped. And now that Ash is on some holy crusade against Golzine, all of a sudden Jim is in awe. Oooh, that’s masculine. That’s a real man’s man! On the other hand, being raped… not so masculine! Look, he won’t come out and say it, but this scene is so ridiculous, I can’t help but come to this conclusion. No one’s choked up at all that some poor woman had to die for no reason. She got stuffed into the metaphorical fridge and she wasn’t even dating our hero! Jennifer just tried too hard to mend the fences, and she died because of it. And yet, we have Jim beaming with pride, practically screaming, “Go get’em, tiger! Make your own version of I Spit On Your Grave, boy!”

— Just as Ash leaves, he turns around and tells his old man not to die. I think I’m supposed to see the silver lining here, which is that there’s hope for this father-son relationship. Haha, oh man, that’s rich.

— Anyways, Golzine forms an alliance with Lee over wine. Lee’s men in LA will assist Golzine in capturing Ash and silencing his friends.

— As for our heroes, they quickly put Jennifer’s death behind them — it’s as if she never existed! — and soon find themselves standing on the doorsteps of LA. I’m glad to see they can deal with death so easily!

— I really want to like Banana Fish, but this episode really pissed me off. Let’s hope it’s not the turning point in the series.

— The best part is that I get to now watch Shichisei no Subaru in my currently annoyed state of mind.