Done and done! But on a more serious note, you can apparently win by just using the same attack over and over. That’s not what I’m disappointed by, though. All this means is that Ai and Mai are greener than I thought. So much for being indoor volleyball players, huh? Anyways, let’s do this from the top…

— As the match wears on, Mai starts to hunch over more and more. She even starts slipping on the sand, ending up on all fours at one point. I guess that commenter from last week’s post was right: Kanata is trying to tire her opponents out.

— I just think it’s a bit odd, I guess. If your attack is one-dimensional, it should be easily countered. According to Kanata’s inner monologue, you can’t win if you never go on offense. That’s totally true. I guess I just never expected Mai and Ai to be even more one-dimensional than our duo. Now I’m starting to wonder which duo has even less experience with the game.

— ‘Cause if you think about it, there are several things going against Haruka and Kanata. First, this is Haruka’s first officiated match. Second, this is Kanata’s first officiated match back from her self-imposed hiatus. Third, Kanata is just doing the pokey over and over, and she’s not even bothering to disguise it. Last but not least, Haruka has missed like a bajillion blocks at the net. Nevertheless, they’re up a set and within reach of winning the second. So what does this tell us? It tells us that Mai and Ai are really bad.

— As our duo slowly evens up the score, Kanata boldly tells Mai that she won’t break. You guys are so corny.

— Near the end of the second set, Haruka finally gets the timing right and blocks her first shot of the match. She then fails to block the second one, but hey, progress! It’s just a bit silly when the girl stands there and gawks at her own hands in amazement. Haruka is totally a space cadet.

— With the score tied up, Claire signals to Haruka by pounding her chest. Our heroine has no clue what the blonde girl is trying to say, and I don’t know either. Apparently, Claire was trying to tell Haruka to go hard. Um, okay.

— The girls get to match point when the wind helps them out on a serve. I guess even the gods are fed up with all this slo-mo action. I know I am!

— Finally, on match point, Haruka goes for the kill: not only does she block Ai’s shot, she drops it straight down. Poor Mai is unable to get to the ball in time, so that’s game.

— Even though it’s just round one of a small, local summer tournament, Kanata couldn’t be happier to be playing beach volleyball. Moreover, she’s playing with a partner that she can fully trust — a partner that has her back all the way. As a result, she dives straight into Haruka with tears in her eyes.

— After some reluctance, Mai even agrees to shake Kanata’s hands at the net. Yeah, don’t be a sore loser.

— In the aftermath, Ai feels as though she’s a liar. She had told Mai that you can beat taller people in volleyball, but they just keep losing. I don’t think it applies in this case, though. I mean, have you seen Kanata? She’s pretty short. In fact, this was a pretty even match-up in terms of height.

— On the other hand, Mai feels as though she has let Ai down. Tall people are always jerks to her, apparently. Since Ai is different, Mai really wanted to come through for her friend. In the end, however, both girls resolve to win one day, ’cause this is one of those happy-go-lucky shows. There isn’t really much drama to be had or explored here. 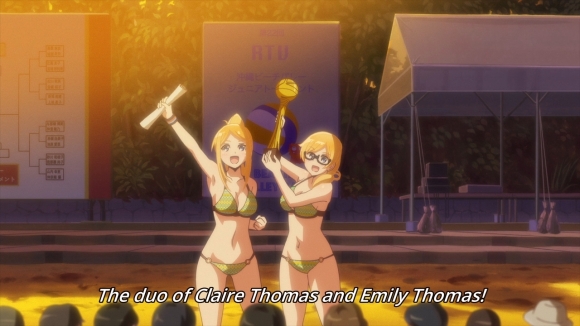 — Here comes the funny part: Haruka feels she’s unstoppable just because she blocked two shots, then we immediately cut to the very end of the tournament. Yep, the Eclair duo wins it all. Meanwhile, Haruka and Kanata got knocked out in the second round. We didn’t even get to see their defeat. That’s why I think this episode is anticlimactic. Sure, we don’t have time to watch the entire tournament, but we didn’t even get to see how they lost.

— Nevertheless, our girls are pleased to have been able to participate.

— Claire then tells Haruka all about nationals. Okinawa can conveniently send two teams to the tournament, so the group agrees to represent the island together. Hell, they even want to win the whole thing. Well, I guess Haruka now has one whole year to get really, really good.

— Meanwhile, this short stack keeps spying on the four girls. I bet she’ll want to become their manager or something. After all, she can’t be another player; she doesn’t seem to have a partner.

— Claire’s chest is practically spilling out of her top in every shot. The only time it doesn’t look like she has comically huge breasts is when she fully buttons her shirt up. I guess women’s clothing is truly that magical.

— In any case, Narumi hears about Haruka and Kanata’s latest accomplishment, and she’s pleased. There are no bitterness here. No resentment. There’s really very little drama in this series.

— As for our heroines, Kanata quizzes Haruka on the signs, but since the latter is a bit of an airhead, even the turtle is smarter than her.

— In the after credits scene, the new girl approaches Kanata at school, but the episode ends before we find out what she wants.

— Short post, but because this episode has a lot of (slo-mo) action, there really isn’t much to say.

Can say I’m interested in them, but I see some culinary possibilities in the filling…

Odd. The ones in the anime looked crunchy. I thought they were like bready snacks.

More pancake-y than bready if I read the recipes right.