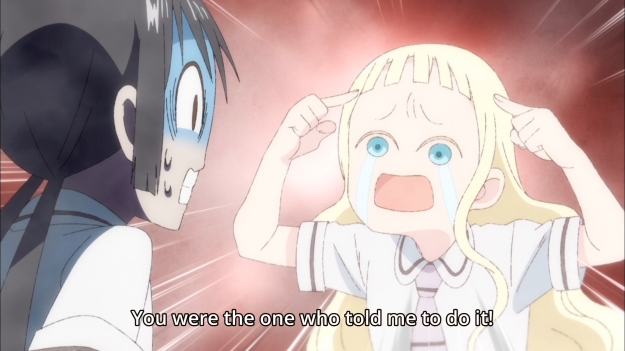 That new haircut kinda makes Olivia look like Mari from A Place Further Than The Universe. 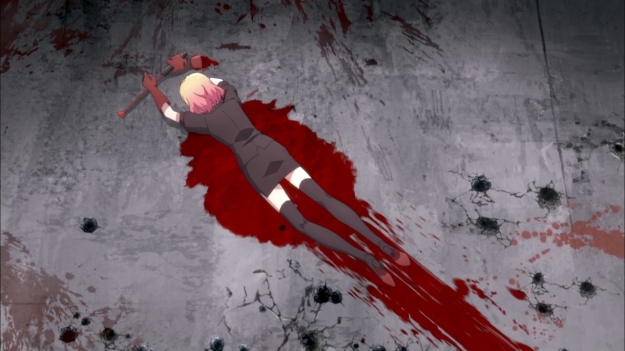 Red Blood Cell and White Blood Cell weren’t exactly childhood friends, but he did save her a long time ago. It seems like he’s always saving her. Too bad she doesn’t seem to recognize him nowadays and vice versa. Not like it matters anyways. Cells can’t have romance. We also get to meet a buff (not really) lady who can kill cancer cells. And for once, Cells At Work! ends on a cliffhanger. I wouldn’t say that the show is moderately better or anything, but at least it has my attention for one more week.

Yeah, I wasn’t too keen about the first half of the episode. I don’t think there’s anything funny about girl-on-girl groping. On the other hand, at least the second half was amusing.

Oh hey, it looks like Cakey’s gonna be a recurring character. Too bad she seems to have a crush on Iori just because he’s nice. Lots of people are nice, girly. If that’s not the case, then I’m afraid to know where you’re from. 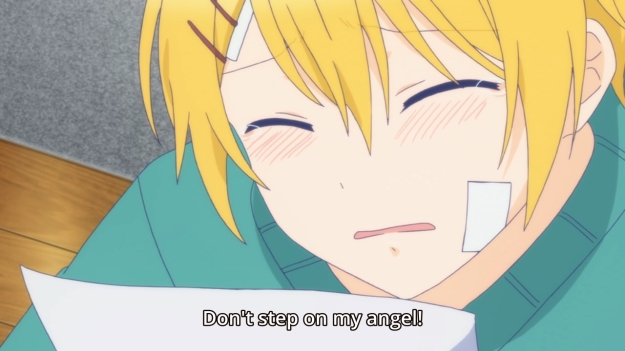 Taiyou freaks out just because Shouko stepped on one of Shio’s many missing person posters. Faced with a nosy stalker, Satou placates the girl by kissing her, saliva strand and all. Thanks Cruel Intentions! Our heroine then freaks out about it later because she thinks she has betrayed Shio for even lying about loving another girl. Likewise, Shio freaks out because she thinks she’s punished for lying about having talked to anyone that night. Last but not least, Asahi’s messed up about something. Just look at his eyes. Those eyes belong to a crazy person. He’s going to have to be crazy anyways, because I bet you anything the story will want to justify Satou butchering him to pieces later. What this show desperately needs is a straight man to counterbalance all these psychos. Just one normal person to give the story a bit of perspective. I’m hoping that Shouko can fill those shoes, but at the same time, I’m also wondering why I’m still watching this trainwreck. There’s nothing of value here. Abused people turn around and abused others. Adults suck. Children just want to be loved. Ho hum. 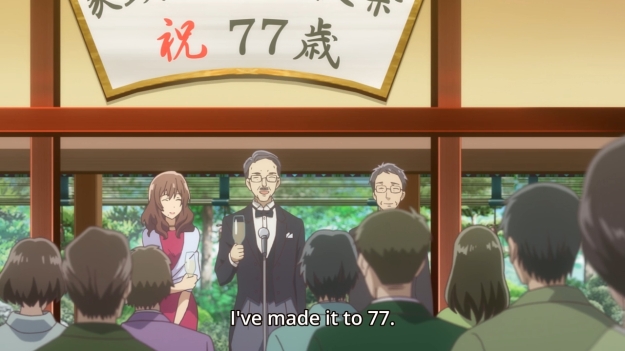 Seiji, the owner of the antique shop Kura, is throwing a birthday bash, and all the warriors are invited. As a result, Aoi gets to meet Rikyu, an overprotective kid who refers to Holmes as Kiyo-nii. He also spends the entire episode trying to convince Aoi to quit her part-time job at Kura. Y’see, he used to have her job until he had to go overseas. It’s obvious that he has some sort of obsession with Holmes that is borderline romantic if he doesn’t want our heroine in the picture. Anyways, his mother is in her 40s, and she’s dating Seiji. Mind you, the old man is turning 77, so that’s quite an age gap. Nevertheless, they’re both well into their adulthood, so whatever. Maybe this explains why Holmes seems to have his eyes for high school girl. Speaking of which, he seems to care more and more about what Aoi thinks of him. In return, this makes her blush over and over, but she’s not quite ready to admit to herself that she likes him. And yes, there’s a “mystery of the week” to unravel, but it’s really quite a minor one. Hell, I think it only took up ten minutes of the episode runtime, so I won’t bother going over it. The only important takeaway is that Holmes got super pissed during the whole ordeal, and he was worried that he might have frightened Aoi.

It’s a new arc, so this week’s episode is a mishmash of events. I won’t cover them all. Instead, I just wanna highlight the curious portrayal of a certain Arche. She used to be a noble, but now she’s desperately trying to eke by as a Worker. Her family is in massive debt, but they still refuse to live within their means. There’s no subtlety here, though; her parents are written specifically to infuriate the audience. In any case, Arche hopes that she can save up enough to rescue her dear sisters from their spendthrift parents. Basically, the story is really laying it on thick. The problem here is that her group intends to go into a foreign country and rob an ancient tomb. Not just any ancient tomb, mind you, but Nazarick so you know where this is going. And when Momon asks them why they’re doing this, the Workers can only tell him that they’re in it for the money. Yeah, that’s not a good look. I don’t see how this can possibly end well for the poor girl. Why else would the story tug at our heartstrings if not to render Arche’s fate absolutely tragic? I think something terrible is going to happen to her. Every now and then, Overlord wants to insist that Ainz and his motley crew of fervent followers are ruthless and merciless. They’ll probably make an example out of these Workers just to put a scare into the Baharuth emperor.

The good: We finally get some concrete answers to questions we’ve been wrestling with all series long. Despite Rintaro’s protestations, Suzuha and Mayuri end up trying to use the time machine anyways. Whether or not they got out of there before the missile hit them, I dunno. We’ll just have to wait and see, but I’m optimistic. That’s besides the point anyways. What I’m trying to say is that as much as I dislike Mayuri’s character, I gotta root for her ability to seize the reins of her fate in this very moment. She’s finally making her own decisions instead of just being a passive character in the background. This plays right into her text message to Rintaro, which tells him that they need to find Stein’s Gate together.

The bad: Professor Leskinen spends 75% of the episode going over every little, stinkin’ detail about everything he’s done. I guess scientists just can’t help educating others, huh? Again, I appreciate the story finally giving us some answers, but this is pretty much the laziest way to go about it. Also, Daru preventing Suzuha from killing the evil bastard kinda ticked me off too. “Don’t kill the bad guy who wants to screw up the entire world in the name of science, ’cause it’ll make you as bad as him!” Sorry, but I couldn’t roll my eyes hard enough at that. Last but not least, Rintaro still needs to get a grip.

The ugly: I’m sorry, but no amount of future brainwashing technology is going to allow anyone to chop people’s heads off with their bare hands. On that same token, no amount of future brainwashing technology is also going to help someone dodge machine gun fire at close range. Steins;Gate has an interesting story, but my god, its action is so bad. It’s disgustingly bad. It should just stick to the science. Hell, part of what makes Rintaro’s odyssey through time such an underdog tale is that he’s just a scientist. He’s a smart dude going up against evil governments and organizations. That’s awesome by itself. But I guess the writer felt the need to put in some hot, sexy battle goddesses in there to make up for the hero’s lack of combat prowess.

Guys like Seiji are so annoying. They’re all nice on the surface, but they turn into huge jealous monsters if you even dare to look in the direction of “their woman.” In this week’s episode, he hears rumors about a young master being a huge playboy. As a result, he’s being all protective with his dear “sister.” It also looks like he acted the same way with a man who vied for her attention in the past, i.e. a certain Sataro. Yeah, yeah, I get it: Seiji likes Oko. Well, then do something about it! Follow the young master’s example! Or heed your sister’s advice! Unfortunately, we’re just going to spend the rest of the series watching Seiji hemming and hawing over his sister. It’s kinda pathetic, honestly. Plus, I can’t believe Oko doesn’t know what’s bothering him either. How do you live with someone for so long and not notice how they act around you? Or how about the fact that the tsukumogami knows Seiji is in love with Oko, but they haven’t “accidentally” gossiped about it within earshot of the girl.

But let’s look at it this way: at the end of the day, Oko chooses to spend all her time with him. She’s a pretty girl, right? She’s well respected within the community, right? If Oko truly wanted to marry herself off, I’m sure she would’ve done it by now. Maybe family ties are more important to her, but she must love Seiji in a certain way to stick around this long. There’s passionate love that you often daydream about, and there’s a steady love that you can rely on. People often selfishly want both, but this is rarely realistic. We’ll see, though. Hell, we’ll see if I even stick with this anime all the way to the end. It’s not the most exciting show. Plus, I really doubt We Rent Tsukumogami will have a satisfying ending. The two siblings will probably just be content to live as they do now, i.e. maintaining the status quo. Anyways, I really want to know what is so goddamn important about an incense burner.

The short story seems to imply that the man would have hung himself if he had tried to come over to the other room, but I’m not sure I follow. Ah well.