As some sort of cruel punishment, the show’s OP has been replaced by yet another terrible pop song sung by the new girl Akari. This week’s episode is all about her wanting to become an idol, and somehow, beach volleyball is supposed to help with that. Shrug, whatever floats her boat.

— Remember, this show doesn’t have dudes. As a result, Akari’s fantasy audience is made up of nothing but screaming fangirls. They look genderless, but their voices give it away. It’s kinda amusing, actually.

— So why does Akari think she can become an idol through beach volleyball? ‘Cause she saw the latest issue of Beach Volleyball magazine. What a great name. Anyways, it features the winners of the last Valkyrie Cup, so of course, Narumi and her partner are plastered on all of the pages. I didn’t know winning the cup would translate into a modeling career. Judging by Narumi’s expression, she does not look comfortable posing in front of the camera.

— I thought idols were generally petite girls with almost no muscle mass. When was the last time an athlete became an idol? Like, don’t you also have to know how to sing and dance? I dunno, I just feel like this subplot is totally and completely random. It feels like the writers wanted to squeeze idols into this series somehow, so they created Akari.

— This is a swimsuit, huh? Looks kinda small.

— Claire is more than happy to have the new girl join the club, because this would make them official. Apparently, you need five members to have a club. The problem, however, is that Akari immediately wants either Claire or Emily to team up with her. That’s kinda entitled. I also don’t know why they wrote her into the story just to be the odd man out. Obviously, the Eclair duo are staying together, but I can’t see the HaruKana duo breaking up either. So even if Akari joins the club, she’s kinda screwed.

— Akari instantly writes Kanata off for being too short. It’s ironic, because the new girl looks pretty petite herself. She’s taller than Kanata, but not by a whole lot. She also dismisses Haruka for being a newbie, but here’s the funny thing: she doesn’t have any experience with beach volleyball either. In any case, the girl storms off after not getting her way. Akari isn’t doing herself any favors. She seems pretty unlikable in a show that is full of happy-go-lucky girls having fun.

— The next day, Haruka and Kanata ask around for Akari, and they learn that the girl has no friends. Why? Because she’s a local celebrity. When she was younger, Akari starred in a few Okinawan commercials. As a result, all of the other kids assume that she’s too popular to want to be friends with them. God, everyone’s stupid here.

— This, of course, reminds Kanata of Narumi, so she wants to help Akari out even more. Yay, the power of friendship!

— There’s an odd moment where Haruka walks up and blows into one of Kanata’s ears. The tall girl then claims that this is punishment for talking about her “ex-girlfriend.” Look, if you wanna put yuri in this show, then have the guts to do actually do it. Maybe not between cousins, though. I mean, it’s not like Okinawa is the Alabama of Japan, right?

— We cut to Akari sitting alone, pitying herself over the fact that her beach idol project has failed. She could try… taking dancing and singing lessons, then attending an audition. She could try uploading videos of herself singing onto the web and generating viral attention. Beach volleyball, though? Really? Again, this is the first time I’ve heard of anyone attempt to become popular through beach volleyball.

— Haruka and Kanata then show up, sit next to Akari, and whip out these giant breads. Apparently, this is their lunch.

— So Haruka challenge Akari to a game, and if the idol wannabe loses, she has to join their team. At first, Akari refuses to even entertain the suggestion, but when Kanata challenges her instead, she accepts. She’s just… dumb. She has no experience with the sport whatsoever, but she thinks she can beat Kanata just because she’s taller by like… what? A couple inches?

— After Akari accepts the challenge, Haruka and Kanata immediately get up and leave. That’s hilarious. I thought they were going to eat lunch with the lonely girl that has no friends.

— Anyways, we soon get to the one-on-one match between Akari and Kanata. Emily will toss the ball up for the new girl, and if she can manage to even score a single point against Kanata, she’ll win. Spoilers: she doesn’t win.

— There’s really not much to say here. Akari’s a beginner going up against a girl with years of experience under her belt. She also yells at Kanata for giving her attitude — which isn’t the case at all — and accuses Claire of not officiating correctly. What a charming girl.

— So the girl loses, but everyone still praises her for her stamina. She tried really, really hard, you guys. These girls are too nice. But as expected, Akari joins the team despite not having a partner, and the power of friendship triumphs again. Yay…

— The next day, the girl gets on everyone’s case for not putting on enough sunscreen. Well, she’s right about one thing: skin cancer’s nothing to trifle with. Also, Claire must be blind. In any case, it looks like Akari is going to be fulfilling the manager role like I expected her to from the very beginning. 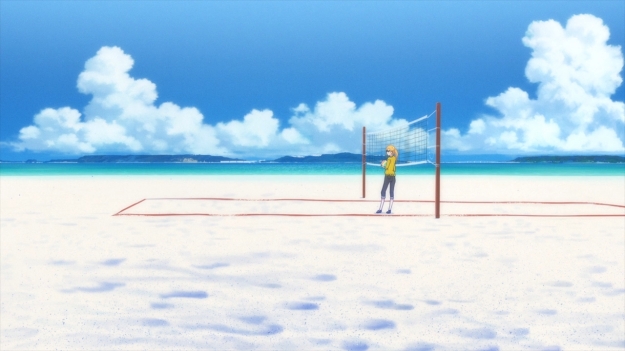 — When everyone gets to the beach, they see Emily and Claire’s mother standing there waiting for them. Everyone gasps as if it this is really shocking and dramatic, but at the end of the day, we’re still watching Harukana Receive. Oh well, that about does it for this week’s episode. The team is finally complete, and the girls can start prepping for the next Valkyrie Club.

1 thought on “Harukana Receive Ep. 7: Idoling the day away”