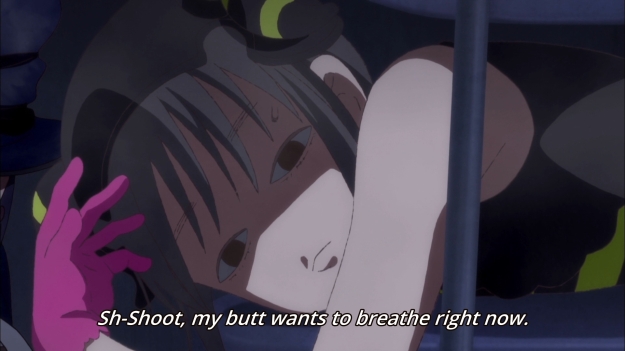 Another episode, another flawless victory. At least it wasn’t stage 4 cancer, right? Anyways, the story really, really tried to give the cancer cells a tragic backstory, but it just got kinda silly. 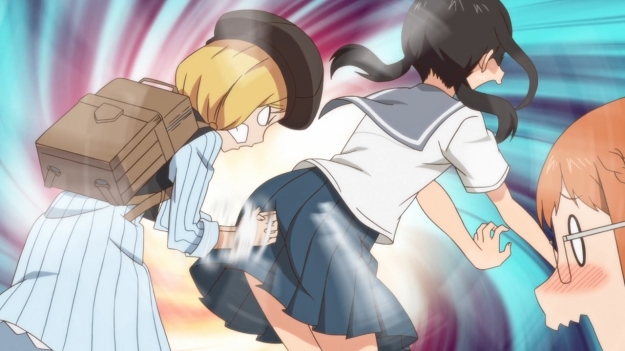 Kids sticking fingers up people’s butts is a cultural thing I’m glad I never had to deal with. In related news, I find myself disliking Madoka more and more as each week goes by!

Oh yeah, I’m still watching this show. Well, it turns out Inuki had leaked info on the last barrier-destroying mission to the enemy, because he wanted to protect the orphanage that he had grown up in. That’s understandable. Who wouldn’t want to protect orphans? Anyways, Inuki and Jun grew up together, so they’re practically bros. Koume grew up with him too, and she seems resigned to the fact that he isn’t long for this world. Inuki is the result of a failed experiment, which is why he turns into a monster every so often. Since he’s losing his humanity, he wants Jun, his bro, to finish him off. Unfortunately, Chihiro intervenes because he wants to try and save Inuki. I’m not sure how he intended to do so, but since he fails, it doesn’t really matter. What does matter is that Chihiro is in danger of losing himself as a result of failing. Oy vey… this kid really does seem kinda useless. So in the end, Inuki dredges up any last shred of humanity he has left to save Chihiro, and in doing so, it looks as if he’s gone for good? Unless you see a dead body, however, you can never be too sure. But yeah, that about does it for this week’s episode. Chihiro is probably the worst protagonist of the summer season. He’s got no clue what he’s doing. All he does is mope around for two-thirds of the episode, then inevitably screws something up in the remaining third. I’m not sad that I stopped dedicating a post to this abomination of a show every week. I’m sad that I even tried. 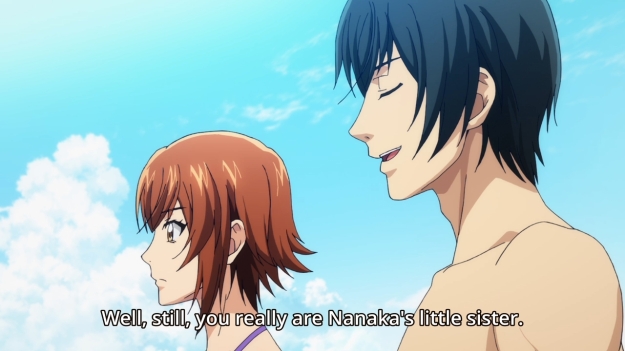 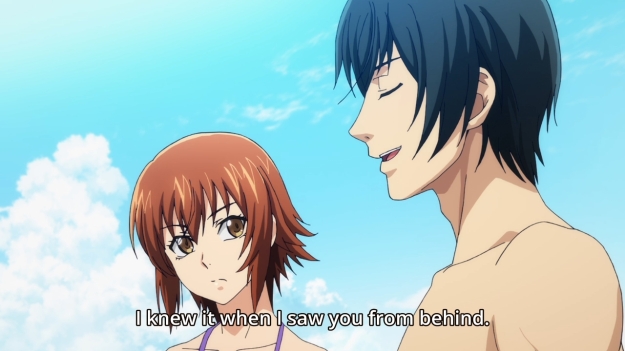 Iori is such a dumbass. Maybe all that alcohol has finally killed off a significant amount of his brain cells. 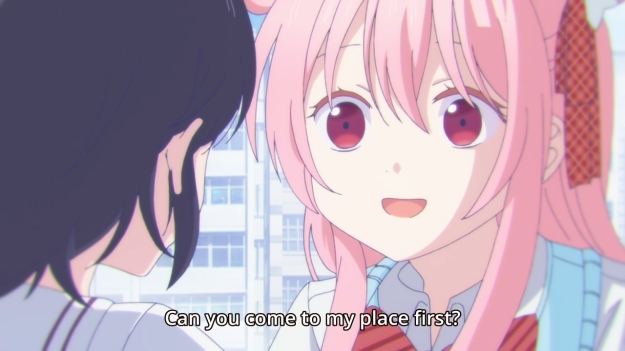 Oooh, Shouko’s gonna die. Why would Satou risk everything just for a girl who isn’t Shio? Think about it. But honestly, I find myself with less and less to say about this show as each week goes by. It would probably behoove me to drop the show sooner rather than later. Maybe next week will be the last… 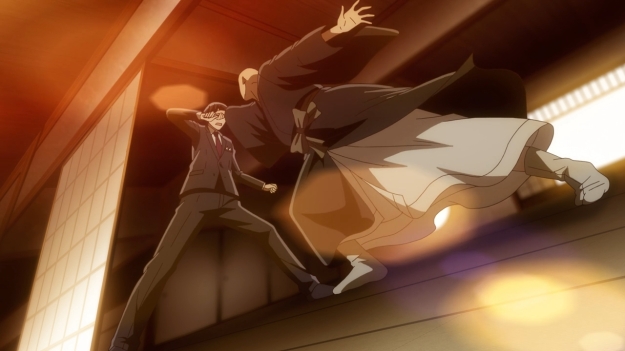 We get yet another dramatic encounter between Holmes and Ensho. I’m not sure how I’m supposed to take this seriously, because at the end of the day, it’s just an art appraiser vs a counterfeiter. On paper, this is not exactly the most compelling battle. We also learn a bit more about Ensho and his oh-so-pitiful past. I don’t particularly care for the guy, but since his goal in life is to humiliate Holmes one day, I guess we may as well flesh out the villain of the show. Nevertheless, Holmes insists that he lost this round, because he had to rely on his… knowledge? That’s a bad thing? Aoi doesn’t agree with his assessment, but she realizes that what the guy needs is encouragement and not words of comfort. If that’s unclear, what I mean to say is that Holmes doesn’t want to hear that he didn’t lose. Rather, he wants to be told that he can totally win the next round. Uh, sure, whatever gets him through the day.

In other news, Aoi and Holmes are inching ever so closer to becoming a couple. Rikyu continues to be a jerk, but Holmes doesn’t hesitate to defend the girl. That’s good! And since the kid insists over and over that he’s the best person to work at the shop, Holmes even engineers a scenario where Rikyu is left behind while the rest of the gang attends yet another fancy birthday party. Speaking of which, Aoi ends up winning an amateur art appraising contest, which really impresses the guy. Why? ‘Cause this totally means she seeks out the truth!!! God, Holmes can so dramatic, which leads me to the ending. It looks as though he was about to confess something to Aoi, but they were rudely interrupted by Akihito. As a result, we’ll have to put a raincheck on whatever it is that Holmes wanted to say. But like I said, it looks as though these two are destined to be a couple. After all, he didn’t look too pleased when she said that her friend wanted her to attend a mixer. I’m a bit of a sap, so I won’t lie; I wouldn’t mind seeing some romance in this show. I still have qualms about a graduate student pursuing a high schooler, but cultural differences and all that… 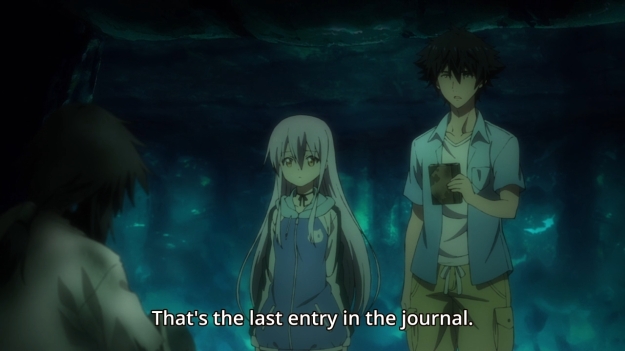 lol i see what you did there

Not that the story was any good to begin with, but I felt like it really jumped the shark this week. Our Setsuna and Rinne end up back on that very same island, but they didn’t manage to travel through time or anything. As a result, Rinne’s Setsuna is long dead. He’s nothing more than a skeleton sitting in a cave… wait a minute, what on earth is this cave? Who put this whole place together? What’s up with this technology? Whatever, we’ll worry about this later. Our Setsuna tries to help Rinne come to grips with the fact that she needs to move on with the rest of her life, and at first, it seems as though he might have just done the trick. But when they tried to return to Urashima, the girl ended up being lost at sea… again. This time, however, she didn’t survive. End of the story, right? Not so fast, my friend!

It turns out Natsumi, Karen’s mother, had been looking into some… ugh, I don’t even wanna try and summarize this part of the story. Basically, everything points to Urashima. The island is just that special! More importantly, they found a pod that lets you travel through time. This same pod is how Rinne survived the last time. That’s why she looks 17 when she’s really 22 (okay, anime). She never washed up back on Urashima. Instead, Kuon, her mother, eventually stumbled upon her sleeping in the very same pod that Rinne’s Setsuna had stuck her in. Where did the pod come from? Who knows! But with it, our Setsuna might be able to travel through time and save Rinne for good. The last thing we see is the guy sleeping naked inside the pod. So I’m guessing we’re going to return to the very start of the series, but this time, our Setsuna won’t lose all of his memories. Maybe this is why he ended up naked on the island the first time. Maybe he’s been trying to save Rinne over and over, and he keeps failing. Look, sometimes we just gotta know when to throw in the towel and cut our losses. We should just accept the bad end and play another game, because Rinne ain’t worth all this trouble. 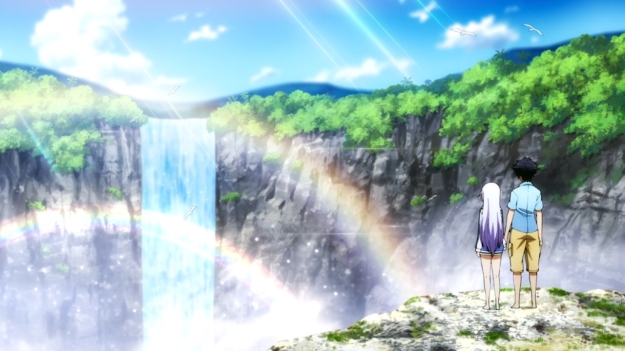 P.P.S. I’d be pretty pissed if I saved my girlfriend’s life only for her to come back to the very place I died with her new boyfriend and rub it in my face. 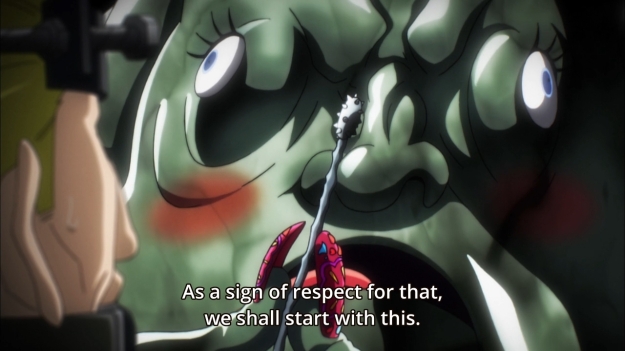 Welp, I’ve never had kidney stones before, but my imagination will suffice. Anyways, this episode is simply a slaughter. There’s hardly any plot to speak of. You tune in just to watch a bunch of fools die. Some die to boney bois, others die to buggy bois. Meanwhile, the nasty Erya gets the sole distinction of dying to our favorite hamster boi. I hope those elven slaves of his are spared. After all, they probably didn’t enter Nazarick because they wanted to. Like most of the other workers, I barely know anything about them, but it doesn’t take a genius to discern that they’ve had hard enough lives as it is. On the other hand, you could probably say the same about Arche, but she’ll probably meet her maker in next week’s episode. Yep, Foresight will have to wait another week to get slaughtered. I mean, there’s a chance they might get spared, but I doubt it. They chose to enter the tomb. They chose to rob whatever riches they could find. They chose to be greedy. Sure, Arche wants to raise her sisters on her own, but if you really think about it, it’s not that hard to go “off the grid” in this universe. She could’ve just stolen her sisters away from their horrible parents in the middle of the night and never look back. There’s no need to resort to being a dirty thief. Having said that, I still hope the Ainz shows her some mercy, because I’m a softie. But let’s be real: after what we saw this week, it doesn’t look good for her and her friends. 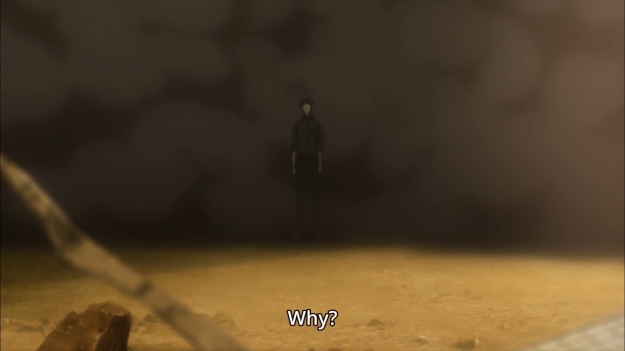 — Rintaro goes back in time in order to warn Suzuha and Mayuri about Leskinen, but he still ends up being too late. Well, you know what they say. If at first you don’t succeed, try, try, try again.

— Dude, I had almost forgotten that Professor Reyes existed.

— Maho truly is the poor man’s Kurisu in more ways than one.

— Amadeus is magically back. Well, not magically, but the explanation they give is not entirely satisfying.

So the guy above concocted a bunch of tall stories just to sell newspapers? Sounds like the media in our times. Anyways, the mystery of week involves a so-called chivalrous bandit, but it really doesn’t interest me. Instead, I’m tuning in to see what unfolds between Oko and Sataro. Years ago, the guy protested his engagement to another woman. He pleaded with his mother that Oko was a better candidate for marriage. This doesn’t necessarily mean that the girl is willing to marry him, but there has to be a reason why she’s desperately searching for Suou, that incense burner. Unfortunately, this overarching plot only makes up a minuscule portion of each week’s episode. I’m not sure if I want to root for Seiji or not. He’s kinda gormless, so it’s hard to get behind such a character. Plus, if he really wants to waifu Oko, he should probably stop referring to her as his sister. After all, they’re not even related.

Nothing wrong with farming insight. 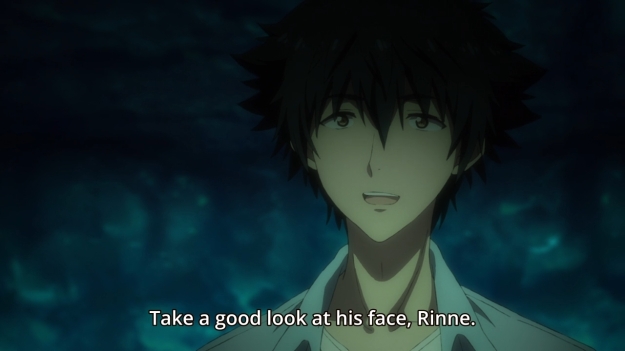