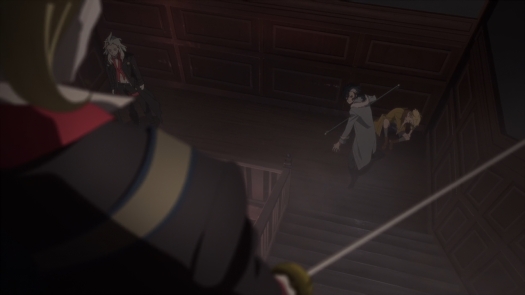 Alright, this show is hype as all hell. What a way for the episode to end. I just hope I don’t to wait forever to understand what happens in next week’s episode. As I’ve often said before, Sirius the Jaeger does not have a very deep story. At the same time, however, not every novel has to be A Farewell to Arms. From the moment Willard found his dead bartender friend, there is not a single lull afterwards. Instead, the tension just keeps ramping up and up and up as the vampires raided Baron Naoe’s mansion. I also love what they’re doing with Ryoko’s character arc at the moment. If she comes out of this show a kick-ass, vampire-killing warrior, all the better. But with that, let’s start from the beginning.

— The only plot development I find rather puzzling happens right at the start of the episode. Klarwein is understandably pissed at Mikhail, because the latter wrecked his Frankenstein. This part doesn’t bother me. What’s odd, however, is that Kershner isn’t angry. Instead, he refers to Klarwein’s project as nothing more than “an imitation, good only for draining our labor and money.” I thought he regarded the whole Sirius’s Ark thing as a waste of time. I thought he funneled money into the whole Frankenstein nonsense, because he wanted a back-up plan. Sure, iteration A might not have been too impressive, but iteration B might be fruitful. It seems a bit premature for Kershner to write Klarwein off completely, doesn’t it? Maybe I’m missing something.

— In any case, the vampires have had enough of the Jaegers meddling in their plans. As a result, they’re planning to wage an all-out war against V Shipping and perhaps anyone associated with them. 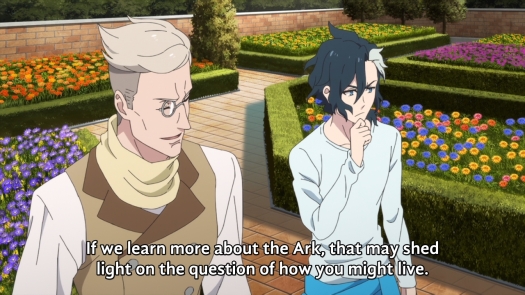 — Speaking of V Shipping, Yuliy is still unsure what he should do next. Ever since the tragedy that befell his village, he’s devoted his entire life to getting revenge. But now that revenge might pit him against his own brother, can he continue being a Jaeger? Willard suggests various alternatives. Of course, Yuliy could always quit. On the other hand, maybe there’s a way to save Mikhail from vampirism. No one really knows how, but if Yuliy wants to save his brother, all he can do is just see this through to the end. The point is, revenge is not the only answer.

— As for Ryoko, she’s now getting scolded by her father. After all, her reckless actions could have gotten her killed. As a result, he wants to put an end to her kenjutsu training. Maybe the art of swordsmanship is making his daughter overconfident when she should be preparing herself for the next stage in her life. Baron Naoe wants her to focus on her studies instead. On the bright side, at least he wants Ryoko to eventually takeover the household instead just becoming another passive wife (unless that’s implicit in becoming the next household).

— Our girl, however, refuses to live a sheltered life. She went chasing after a boy, but came away with a thirst for the world. She tells her father that there are things she can’t learn if she remains cooped up in her house. As a result, Ryoko defiantly opposes her father’s wishes. Yeah, you go, girl! I mean, look, if she ends up becoming independent as a result of a crush, hey, I’m not gonna complain.

— As for Ibe’s team, their attention is now turned towards the remnants of the Alma Company. Ibe, however, still has his mind fixed on V Shipping. Hasn’t he seen enough? What more does he need before he can trust them?

— We also learn that Kakizaki had taken his own life shortly after taking responsibility. Welp, he kinda went down without any fanfare.

— Man, these two look malnourished. Look, I know it’s a cultural thing; I know skinny bois are more attractive in certain cultures, but my point is that it’s not always about attraction. If you want to convince me that Yuliy can fight off an army of beast-like vampires, maybe he shouldn’t look like he weighs 100 lbs wet.

— Regarding Mikhail, Philip goes, “Vampire or not, isn’t that way better than never being able to meet him again?” At first, I wholeheartedly disagreed with him. I sure as hell wouldn’t want to seem my loved ones turned into a bloodsucking monster. On the other hand, the blond kid lost both of his parents at a very young age, so you can understand why he would probably want to seem them again at all costs. I mean, at the end of the day, I still disagree with him, but I get where he’s coming from.

— We cut to Ryoko continuing on with her kenjutsu practice. Look, she hopped from one moving train car to the next. Compared to that, being yelled at is nothing. 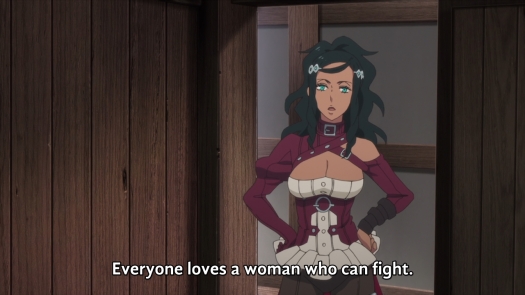 — I can’t disagree with this.

— Dorothea reveals that she, too, had come from a rich family (though admittedly not as rich as Ryoko’s). She chose to become a Jaeger, because she couldn’t bear to sit idly by when monsters like vampires are “allowed to exist.” This seems to resonate greatly with Ryoko. Hey, who knows? Maybe by the end of this series, our ojousama will have become a Jaeger herself. It’s just funny how it’s been episodes since she’s interacted with Yuliy. He might end up being the catalyst that completely transforms Ryoko’s life without even realizing it.

— Akimoto, Willard’s bartender friend, tries to dig up information on Alma’s missing managers, but he gets an unpleasant encounter with Ibe instead. The latter wants to know everything that the former knows. Unfortunately, we don’t get to see what exactly transpired between these two men.

— When we next see Akimoto, he’s being tailed by two obvious vampires. By the time Willard gets to the bar, it’s too late. The vampires only allowed Akimoto to live long enough to lay a trap for Willard. Still, it seems as though the man came through in the end with the much needed information. V Shipping just has to live long enough to do something with it.

— The vampires immediately try to ambush Willard, but he slickly defeats them all by himself. Then again, all of the action in this show is slick, but I digress. Williard quickly proceeds to warn his team that the rest of the vampires are coming for them.

— No one is fazed to hear the bad news. In fact, Philip and Fallon are downright excited to throwdown against some bloodsucking baddies. I guess when you’ve been doing this long enough, you no longer get scared. Or maybe they’re just overconfident.

— Dorothea explicitly sends Yuliy to warn Ryoko about the impending attack. The girl looks so happy… until she realizes that he’s only here because of Dorothea. Still, she finally got to talk to him, so that’s something, right? I probably mentioned this before, but unless Ryoko has to save Yuliy’s life at one point, I doubt he’ll ever really take notice of her. And as much as I like romance in my stories, eh… I’m not all that invested in these two as a potential couple. They don’t have any chemistry. That’s partly because they never interact, but still…

— In any case, it’s up to Ryoko to round up the civilians in the house and hide them safely in the storehouse. As a result, she dons her battle gear. All she has is a chest piece, though? She doesn’t look all that well protected.

— The rest of the Jaegers arm the entire place with booby traps, but this can only do so much. This might work against a small group of vampires, but not an army. This ain’t Home Alone.

— As they wait for the vampires to attack, Yuliy asks Philip if the latter ever wanted to kill him. The latter still remembers what Saki had said to him about Yuliy, so he doesn’t blame his teammate for what had happened to his parents. By the way, Saki is the poor, little girl who had to watch her father die right before her very eyes. She might get brought up in future conversations, but I’d be shocked if she ever shows up in show again.

— Anyways, Yuliy’s still trying to figure out if he needs to soften his stance on murdering all vampires. After all, he ideally doesn’t want to have to murder his own brother. Plus, after what we saw in last week’s episode, it doesn’t look like Yuliy can really beat Mikhail in a fair fight anyways.

— Like I said last week, I don’t really see why being a vampire means you have to be a bad guy. If the show can pretend that werewolves can be harmless to society (like Yuliy), why can’t we pretend that certain vampires might not want to do the whole conquer-the-world nonsense that Yevgraf seems to be aiming for?

— Finally, the vampires are here, and there are a lot of them. Suffice it to say, the Jaegers will need more than booby traps to get out of this one. In fact, I’m kinda surprised that they split up. You’d think they’d be safer together, but I could be wrong on that. It’s not as though I’ve ever had any combat experience. I certainly have never fought vampires before.

— Now that Baron Naoe realizes what’s happening to his mansion, he wants to protect Ryoko. But can he honestly fight? Can he even slow the monsters down long enough for everyone else to get away? Otherwise, he’d just throw his life away for no reason. If Naoe can’t fight, he should just put his trust in his daughter. That’s probably asking too much of a parent, though. No decent mother or father would sit back and watch their child die before their very eyes.

— As the episode draws to a close, Yuliy and Philip find themselves escaping one predicament just to stumble into the next:

— When you’re outnumbered, the pragmatic thing to do is to cut your losses and leave any fallen allies behind. But c’mon, what self-respecting anime protagonist would ever do that?

One Reply to “Sirius the Jaeger Ep. 6: All out war”