Things quickly fall apart for Ash and his friends.

— The bad guys have Jessica call up Max. The anime doesn’t come right out and say it, but she was more than likely sexually assaulted by the guy holding the phone. Later in the episode, Max will swear to make the guy pay, so if you put two and two together…

— It’s unfortunate, really. Sexual violence is used as a weapon against others over and over in this story. I mean, hey, this shit happens in real life. But for a lot of us, we turn to books, movies, and TV shows to get away from the harsh realities of life. Oh well, nothing to do now but to soldier on. At least Banana Fish isn’t being gratuitous about it.

— Still having no reason to distrust Shorter, Ash leaves his buddy behind to protect Eiji and Shunichi. Meanwhile, he and Max will attempt to save Jessica and Michael. When Ash is about to leave, Shorter looks like he wants to reveal everything. But in the end, he chickens out.

— Yeah, I know, he’s worried about his sister back in New York. But the bad guys have only alluded to the possibility of threatening her. They haven’t actually done anything to her yet. There are a lot of options Shorter could’ve taken. He could’ve called his sister and see how she was doing. He could’ve contacted his connections in New York to see if they could protect her. He could’ve done a lot of things. Maybe there are too many eyes watching Shorter’s every move, but there’s nothing in the show to really support this notion. I feel like he just didn’t even try to find a solution out of this predicament.

— When Ash and Max get to Jessica’s home, the bad guys have already left. They only wanted to lure Ash away from Eiji. Thankfully, the kid looks to be A-OK. At first, Max’s wife slaps him, but she quickly falls into his arms. As angry as she is right now, she’s been through enough. Maybe Max could’ve warned his family that he was going up against a mob boss. Hindsight is 20/20, but again, it feels like everyone could’ve done more to prevent these tragedies from happening over and over. But instead, they just all seem so careless.

— Back at Dawson’s mansion, Shunichi grips his chest because he has obviously been drugged. When Eiji tries to help his mentor, Yut Lung paralyzes Eiji by… I dunno, puncturing one of his pressure points with a needle. It’s one of those ancient Chinese arts deal. I’m pretty sure it’s bullshit, but I’m too lazy to look it up. For the sake of the post, let’s just pretend that Eiji has been knocked out completely for the time being. Yut Lung intends to drag the kid all the way back to New York whereupon he’ll become Golzine’s latest toy. They specifically want Ash to suffer, so I guess this works.

— As Shorter leaves with Eiji in his arms, he swears that he won’t let any harm befall the kid. Nevertheless, he’s still assisting the bad guys at this very moment. I dunno, man, I just don’t think he’s very smart. I don’t think any of them are all that smart. For instance, Shunichi claimed that he wanted to protect Eiji, but he didn’t drag the kid home at the first available opportunity. He even accompanied Eiji all the way to LA, and even then, he still didn’t make him hop on the first plane back to Japan. If you want to call yourself a responsible guardian, it should have never even got to this point. Likewise, Shorter acts as if he would protect Eiji with his life. Well, the time to do that would be now!

— When Arthur shows up to take Eiji away, Shorter holds a knife to the kid’s neck. Hmmmm. I mean, I guess that’s one way to do it… but again, it never should’ve gotten this far.

— When Ash finally discovers that Shorter had betrayed him, he is sympathetic. Well, I’m not.

— All of a sudden, this dude comes stumbling down from the second floor. He’s apparently Alexis Dawson, the older brother to Abraham Dawson. Where has he been this entire time? And when did he even get back? What was he doing on the second floor? Did he not noticed Shunichi’s unconscious body lying on the floor?

— We cut to Golzine having a very important meeting with a US senator and a colonel. Wait, a colonel? Not even a general? Would colonels even have enough cachets to be doing shady backroom deals with the mafia? I honestly don’t know. I don’t really care about anything that has to do with the military.

— In any case, the colonel wants to know if the drug is ready to be used. Apparently, what Abraham injected into Griffin was just the prototype, but that makes sense. You wouldn’t want your soldiers to suddenly go nuts and shoot each other. The refined version of Banana Fish probably turns people into mindless but obedient killers instead. 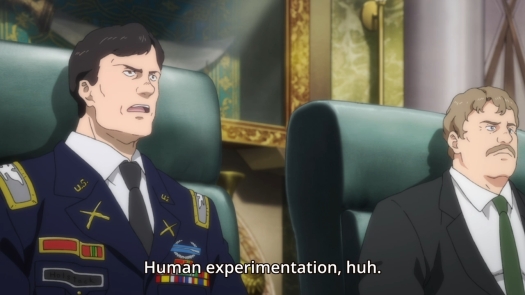 — Golzine claims that they just need to test it on someone, and he has the perfect candidate in mind. It can’t be Eiji, can it? I thought he wanted to degrade Eiji the same way he degraded Ash.

— Back in California, Ash gets rough with Alexis and tells the scientist that he doesn’t have time to sit around and chat. Well, that’s exactly what we’re going to do anyways.

— Before you know it, Shorter and Eiji are already back in New York. Uh, has five hours passed already? I just recently went on a trip to New York, and it takes about five to six hours to get their through the air. Even if they take the fastest flight possible, it’d still take nearly three hours to get there.

— We quickly learn that Yut-Lung’s other brother is not all that fond of him. In fact, he’ll also be handed over to Golzine in order to be a spy. Hmm…

— We cut back to Alexis, who proceeds to spill the beans on Banana Fish, i.e. how it was created, why it was created, etc. The ideal version of the drug will make you follow orders without question. There are lots of questions I want to ask, like how can you differentiate between an order you should follow and an order you shouldn’t follow, but meh… getting nitpicky about the show won’t get us anywhere.

— The next time we see Yut Lung, he’s all decked out and ready to seduce some creepy old men. As he leaves for his mission, he swears to get his revenge on his half-brothers. Apparently, they had murdered his mother in addition to raping her.

— After Alexis is done telling his story, everyone pretty much rages out at him. Even Shunichi joins in on the fun just to immediately collapse to the floor afterwards. But again, if Eiji is back in New York, this means that these guys have wasted hours listening to a scientist prattle on and on about a drug. If Max needs information to expose Golzine, he should’ve just had the guy download it all onto a USB drive.

— But it’s too late for that, ’cause we wasted all of our time chatting! The bad guys who attacked Jessica are here, and they’re going to drag Ash back to New York as well! We’re all going to New York!

— And right before they leave, they set fire to the entire mansion. Hopefully, all that information is backed up somewhere…