For a show where the characters are anything but flat, the drama sure is a letdown. But we’ll get to Narumi and Kanata later.

— Marissa, Emily and Claire’s mother, is here to help get Haruka and Kanata up to speed in time for nationals. Emily had personally requested this, too. Since she’s apparently a pro volleyball player, this is a one-of-a-kind opportunity. How many people ever get to play their favorite sport with one of the pros?

— When Emily asks about their father, Marissa says to not worry about him. That’s hilarious, because this show literally does not portray male characters. No, seriously, they are nowhere to be found. But at least the characters don’t pretend as though they’re fatherless, I suppose.

— I always knew Kanata was short, but Jesus Christ, Marissa dwarfs her. Naturally, she’s even taller than Haruka.

— Meanwhile, Akari just ogles Marissa’s body. Well, hey, her daughters are teenagers by now, so she has to be at least in her mid-30s, but it’s much more likely that she’s in her 40s. If she’s got a stomach that toned in her 40s, hey, more power to her.

— Unfortunately, the poor girl doesn’t get to play with the rest of the kids. She kinda joined this club for nothing. I don’t know why the writer couldn’t just come up with one extra character. It’s not like these girls have super distinctive personalities. We probably could’ve jammed in another generic, happy-go-lucky volleyball lover into the story. 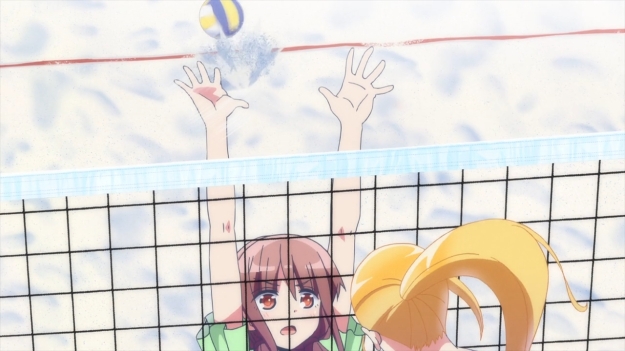 — Anyways, Haruka and Kanata’s first lesson is to try and block Marissa’s spikes. She’s not as strong as she used to be, but she still leagues ahead of the girls. So y’know, we get to watch the girls miss a lot of spikes in slow motion. Par for the course for this anime.

— Eventually, the duo finally realizes that they’re a team. You think I’m joking, but I’m not. They finally realize that neither person has to block or receive Marissa’s spikes on their own. Instead, Haruka can slow the ball down just enough for Kanata to get it in play. Dude, it’s the eighth fucking episode, and we’re only now realizing this? Ugh…

— After this oh-so-big epiphany, we take a break, ’cause Akari has returned with popsicles. Yep, she get sent on popsicle duty with Claire.

— While the girls enjoy their popsicles, we get a flashback. Kanata and Narumi first met the Eclair duo in a junior volleyball tournament. In fact, they played against each other in the finals. We’ve kinda seen this before, though. We saw a flashback where Claire was crying, so as you might expect, she and her sister had lost against Kanata and Narumi.

— Afterwards, the show gives a montage to convey the passage of time. The girls get their club officially approved. Everyone would continue practicing together. HaruKana go through the signs at home. And poor Akari finally gets coached by Marissa, but she still has no partner.

— Finally, the montage ends with everyone at a shrine for the new year.

— Like I said, there’s not a single male character in this show. It just looks odd. It’s not that we need a guy in a speaking role. It’s that they don’t even get to be extras in the background. What an odd art direction.

— When the girls draw their fortune, Akari is the only one to get something less than positive.

— Finally, we get to the one small source of drama in this week’s episode. Ayasa rings up Haruka to tell the girl that she and Narumi are currently in Okinawa, but not for long. They have to quickly catch a flight to Kyoto, but boy, wouldn’t it be cool if Kanata and Narumi could meet up again?! As a result, genki girl Haruka is determined to get her partner to the airport in time. Marissa even shows up just to drive everyone to the airport even though this is between Kanata and Narumi.

— When Narumi thinks about the last time she saw Kanata in person, she grimaces. It’s been months, but I guess she’s not over the fact that she couldn’t help her former partner get over her insecurities.

— So this is a classic setup, right? You see this all the time in stories. Someone has to leave soon via plane or train, and someone else has to race against time to see them off. This part of the episode even has an insert song and everything. Unfortunately, this entire sequence just doesn’t resonate with me. In fact, I got so bored with the episode that I paused it to go through my Twitter feed. And look, I only follow 20 people on Twitter, so it’s not a very interesting feed!

— Emily and Claire brace themselves when they get in the car, because their mom is apparently a wild driver. But hey, this 3-D car looks better than other 3-D cars in recent memory.

— As Narumi waits, she bemoans the fact that she can only wait. She’s still sad that she couldn’t do anything for Kanata. I guess the elephant in the room is that she regrets the fact that they ever “broke up.” This could lead to bitterness and frustration from Ayasa, but eh, not really? Not since the first episode? The show doesn’t really do the legwork to build up its drama, so this part of the anime just falls flat. It doesn’t do anything for me.

— Marissa can try to drive as fast as she wants, but there’s nothing she can do against traffic. As a result, the girls do yet another classic thing: they get out of the car and start running.

— Narumi is just about to step through security when Kanata finally calls out to her. The latter swears that she’ll keep her promise — she’ll keep her promise to become a national champion at volleyball. Unfortunately, she’s going to have to do it with Haruka. Even though her former partner ran all this way just to speak with her, Narumi doesn’t turn around. Maybe she’s in tears or something, who knows. Eventually, she holds up one pinkie, so she’s going to try and hold her end of the promise as well. But like I said, Harukana Receive is too drama-free in general, so this moment doesn’t resonate. I guess the takeaway here is that both girls need to move on — Kanata certainly has — but the scene isn’t as powerful as it should be. Narumi has had no character development since the first and second episode, so it’s hard for me to really care one way or the other about her.

— We soon see that the girls had stuck around to watch Ayasa and Narumi’s plane take off. Between checking in and take-off, the whole process can take quite a while, so I feel like this is a bit unrealistic. Who honestly wants to stand around and wait for a plane to take flight? I mean, I’m sure this shot looks poignant on at first glance, but if I try and think about it, it just comes off as silly.