Even if they threaten to destroy the whole world just because you’ve stolen their waifu, you must be merciful!

How Not to Summon a Demon Lord Ep. 8 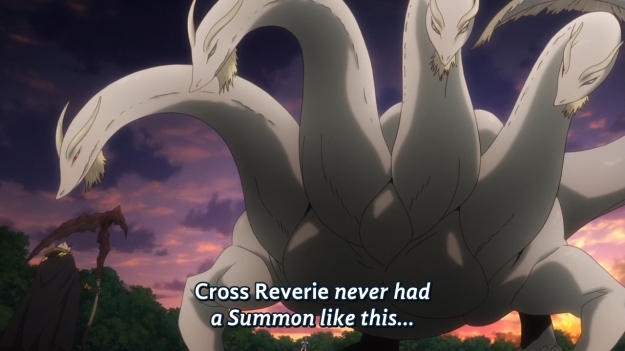 — This is the anime trying to convince us that the pale-skinned hydra can actually be a threat to Diablo. Shera even tells Diablo to run, because there’s no way he could possibly defeat the elves’ royal treasure. But look, if it truly has the power to destroy the world, then our demon lord may as well try and do something about it, right? Keera can’t even control his summon, so we can’t exactly have a rampaging hydra doing whatever it wants.

— Oh hey, look at the thing open one of its mouths. For once, something actually looks somewhat gnarly in this anime.

— And like any hydra ever, if you cut off just one head, it’ll just grow back.

— In fact, the way to defeat this beastie is to destroy a core… which moves around. That sounds silly, but whatever.

— So now that Keera has nothing left to throw at Diablo, our hero can finally take out the rapey bastard who literally wanted to start a war over the chance to impregnate his sister. Makes sense, right? Unfortunately, Shera still begs Diablo to spare her brother. That’s just stupid. This guy is so unhinged that if you leave him alive, he might try something even dumber in the future. More lives — both human and elven — could be at stake. Sorry, but family doesn’t trump justice.

— Being a softie, Diablo lets Shera have her way. Luckily, the rapey bastard doesn’t get very far before someone else finishes the job anyway. Oops.

— That’s when Galford and his army reveal themselves. The Lord of Faltra essentially wanted Diablo to weaken himself against the elven army. He would then use this as a pretense to invade Greenword. He probably would’ve gotten away with it too if he didn’t go and threaten to steal away one of Diablo’s haremettes. Tch, that’s where you erred, man. Never, ever try to steal another man’s slave!

— At first, Alicia tries to stop Galford, but he’s so fast, he breaks her sword without her even realizing it. Look, no one’s allowed to look cool and save the day except Diablo, okay? Stop trying. Just stand in the back and look pretty.

— Well, that’s not very pretty at all.

— Anyways, according to Diablo’s analysis, Galford must be at least level 120. In the end, however, he’s still no match for the demon lord. I won’t go through every little detail of the fight, though. I mean, there’s nothing particularly new here. Diablo simply casts some spells and win. Yawn.

— And like before, our hero will spare yet another life. I can’t roll my eyes hard enough.

— In the aftermath, the show tries to make me empathize with Shera, but it doesn’t work. After all, I’m not going to forget the fact that Keera literally summoned a hydra that could destroy the world just because he wasn’t allowed to nail his sister. 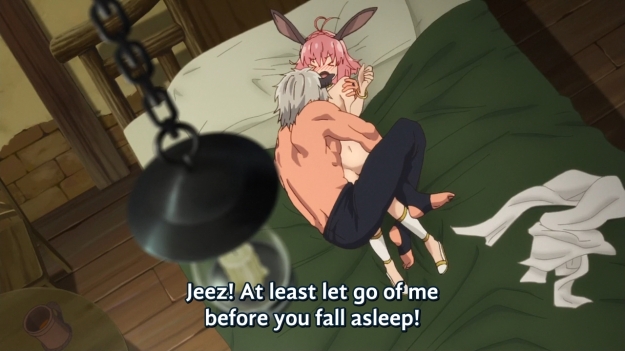 — Just one very quick scene at the end of the episode.

— Diablo is low on MP, so he has no energy to even get out of bed. So why not just drink an MP potion? Well, they’re broke right now.

— This is when Sylvie, the bunny girl, comes up with a brilliant idea: give Diablo alcohol that also has the curious side effect of restoring MP. Hey, he’s a demon lord, right? And there’s no way a demon lord would be a lightweight, right?

— A drunken Diablo proceeds to grope and molest Sylvie because he thinks she’s a dakimakura (body pillow).

— And naturally, said groping quickly leads to the DANGER ZONE™. But this isn’t the real world, so fake bunny girls don’t get mad. Instead, they just ask you to take responsibility.

— Harem ethics are very simple: don’t ask for permission, ask for forgiveness. And when in doubt, blame it on the alcohol.

The Master of Ragnarok & Blesser of Einherjar Ep. 8

— The first half of the episode concerns Effy, who is being ignored by all of her classmates at school. Why? Because the queen bee of the class is jealous of Yuuto doting on Effy. Even little girls want to his attention. Gross.

— Instead of teaching the kids that bullying is wrong or that you shouldn’t blindly follow someone just because they’re popular, Christina instead decides to becomes the next queen bee of the class. In doing so, she isolates the previous queen bee. Tit-for-tat, basically.

— In the end, the problem is only solved by Effy taking the extra step to reach out to the other girl.

— In the second half of the episode, Christmas is fast approaching, but obviously, you don’t celebrate the yuletide in Yggdrasil. Nevertheless, Yuuto wants to hand-make some presents, so he’s enlisted the help of Ingrid.

— He eventually manages to make two rather shoddy-looking presents, but he keeps butting heads with the somewhat tomboyish Ingrid. So to smooth things over, he gives her a magatama.

— Right before the episode ends, we see that the Lightning Clan and the Panther Clan will team up in order to bring Yuuto down.

— Barely anything to speak of in this week’s episode. The episode opens with Sigyn having sex with Loptr, but since she’s not one of Yuuto’s haremettes, I guess this doesn’t really count.

— A convenient gust of wind allows us to see Felicity’s shiny legs, but Yuuto isn’t even paying attention.

— When Ingrid finds herself alone with Yuuto, she tries to turn up the charm. But instead of being seduced by her, the patriarch simply gives the poor girl a lecture on how she needs to be more feminine. What a dick.

— Still, Ingrid insists that she doesn’t care about getting married. After all, she already has a guy she likes.

— The episode opens with Genshiro, a new character, prowling about for concubines. Unfortunately for him, Oboro, his retainer, won’t allow him to run off with just any regular ol’ women. He needs to find a girl with great spiritual power. Well, you know what that means.

— By the way, Oboro may look like a boy, but it’s a cute boy. Also, the character’s seiyu is obviously a woman. If Yuuna and the Haunted Hot Springs truly wants to be a proper harem, then I expect Oboro to be a woman who eventually falls in love with Kogarashi.

— Speaking of Kogarashi, he finds himself in yet another sticky situation in the middle of the night. Unfortunately, he can’t extricate himself from this one, because he somehow went and got one of his legs all tangled up with her panties. Needless to say, he soon finds himself being defenestrated yet again.

— The next morning, Yuuna is sad that she keeps dunking Kogarashi into the river. They obviously like each other, but this is a harem, so he’s not allowed to pick any of the girls until the story has been run into the ground. But considering how the source material has had eleven tankoubon volumes (well over 200 chapters), it doesn’t sound like Yuuna and the Haunted Hot Springs is ending anytime soon. Christ, I didn’t expect it to be so popular. I guess people are just that hungry for classic harem series, huh? They used to be all the rage back in the day.

— Later that day, Yuuna accompanies Koyuzu, the tanuki, on an errand. This is when she unfortunately catches Genshiro’s attention. Not only can he see her, he’s absolutely smitten. He quickly declares that he will take her as his wife. Also, thanks to weird scales on his body, he is spiritually strong enough that she can’t just repel him with her own poltergeist powers. Apparently, he’s got the power of the black dragon, whatever that means. 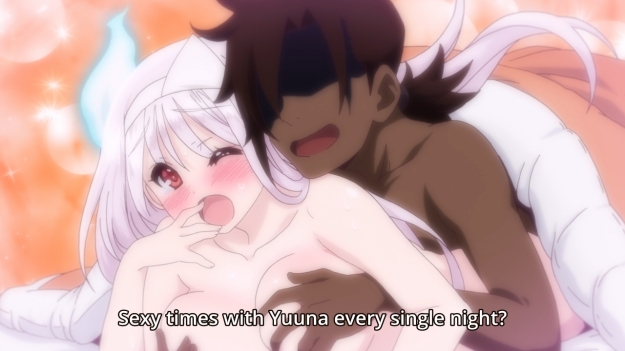 — Koyuzu tries to tell Genshiro that Yuuna already has a man. In fact, she and her man engage in ecchi activities every night! Well, the tanuki technically isn’t wrong.

— When the little girl then tries to save Yuuna, Oboro threatens to seriously hurt her. As a result, Yuuna agrees to quietly leave with Genshiro as long as nothing happens to Koyuzu.

— Even later that day, Kogarashi and Sagiri return home from school to find the tanuki quietly sobbing to herself. She finally tells them what had happened. Geez, do none of you guys have cellphones? We could’ve started this rescue mission hours ago.

— Naturally, the guy will do everything he can to save Yuuna. The ninja-wannabe will also help.

— Back at Genshiro’s castle, Yunna’s already dolled up. Nevertheless, this doesn’t satisfy her kidnapper, so he uses a spell that, uh, basically forces her to cosplay. As a result, we get to see her in bloomers, as a bunny girl, as a maid, as a nurse, and finally, in a Chinese-style dress. The cosplay party only ends when Oboro comes and disciplines Genshiro. Y’know, she’s pretty cheeky for a retainer.

— Yuuna is dumb as hell. Why do I say that? Well, Oboro manages to convince her that it would be beneficial to Kogarashi if the girl willingly marries Genshiro. She truly believes that she’s bad luck for the harem lead. What? All because she dunks him in the river every once in a while? Get a grip.

— Apparently, Genshiro and his clan lives way, way underground with a bunch of fish people. 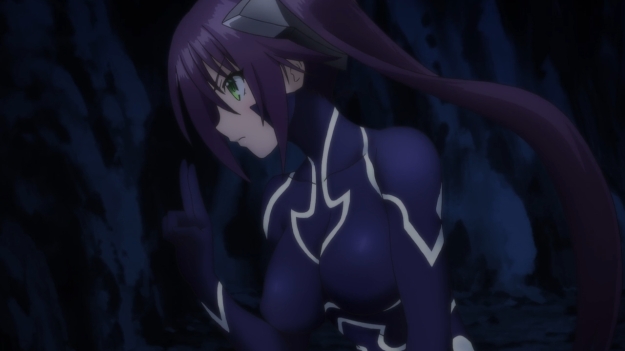 — And in order for Sagiri to get into the mindset of a ninja, she also needs to cosplay as one. As a result, we now see her in this ridiculously skin-tight bodysuit that allows her breasts to sway all over the place.

— Even in the middle of a rescue mission, she and Kogarashi share an ecchi moment.

— So the strategy here is to have Sagiri infiltrate the castle by herself and retrieve Yuuna. In order to draw any potential attention away from her, Kogarashi will march right up to the front gates and taunt Genshiro.

— Unfortunately, he quickly finds himself captured and bound in stocks.

— And even if Genshiro is busy dealing with Kogarashi, Sagiri will have to deal with Oboro who has stayed behind to guard Yuuna.

— Will our heroes be able to rescue their favorite ghost girl from the fish people? Tune in next week!

4 thoughts on “Harem Something or Other Pt. 7: Never kill anybody no matter how bad they are”