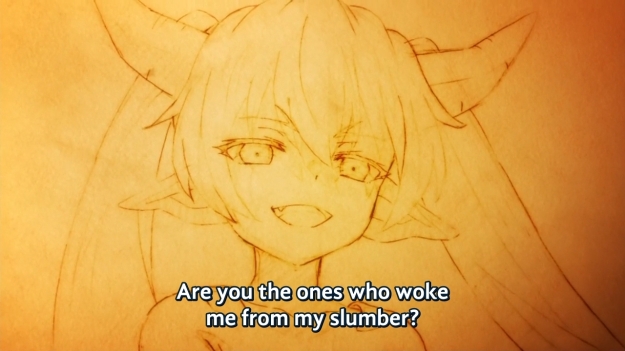 Why am I not surprised?

How Not to Summon a Demon Lord Ep. 9 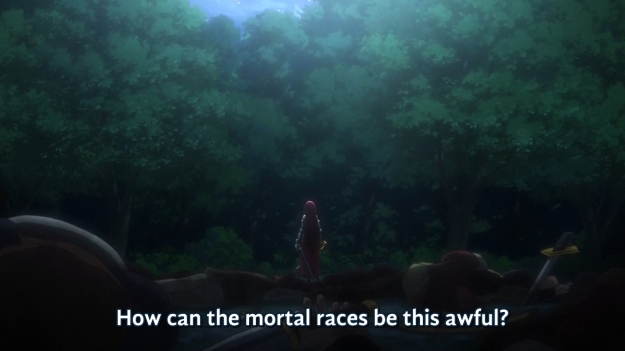 — First, we see a woman with long red hair murdering people, because she thinks mortals suck. She sure sounds and looks like Alicia. It’s Alicia, isn’t it? Oooh, our four-eyed knight has a naughty side!

— Afterwards, we see a dude murdering people, because he thinks they’re worshiping the demon lord. Well, duh… he’s a guy, but he’s not the harem lead. As a result, he’s either a bad guy, a loser, or both!

— I like how the bodies are evenly spaced apart.

— Said dude is a paladin, and his name is Saddler. He takes special joy out of torturing people out of some mad quest to root out evil. Basically, it’s religious extremism. Anyways, he’s headed for Faltra, because he heard something about a demon lord lurking around the city. Hmmm.

— Elsewhere, Shera summons and bounds a poor bird to her. I feel bad for the thing. It looks like it can barely breathe.

— During bath time, Edelgard suddenly shows up of nowhere to take a closer look at Rem. She’s a Fallen, so she basically has a fetish for demon lords.

— Now that Rem’s secret is out, she may as well fill Shera in on the details. At first, the girl is hesitant, because she doesn’t want to scare one of her few friends off. But this is Shera we’re talking about; she’s too much of an airhead to be mean-spirited.

— Edelgard offers to teach Diablo a ritual that will extract Krebskulm from Rem, which Diablo seriously considers. After all, he wants to rid the loli of her burden. The only question, however, is whether or not he can defeat the thing once it emerges.

— I wouldn’t go to a restaurant with one cat let alone eight of them.

— When Alicia returns to Faltra, she immediately tries to hide Diablo. After all, not only is Diablo a self-proclaimed demon lord (and naming yourself “Diablo” can’t help), but he’s even trying to summon one! It’s for a good cause, but Saddler doesn’t know that!

— Despite Alicia’s best efforts, the party runs into the murderous bastard anyways. Saddler claims to have divine powers, which he uses to choke Rem. But upon closer inspection, Diablo realizes that the guy is full of it. He’s just casting a spell, but somehow disguising the magic part.

— When Saddler then turns his attention to Diablo, his spell is reflected back on him. As a result, he turns into a statue. So, uh, we should kill this guy, right? Well, the problem is that Diablo doesn’t know about Saddler’s crimes. Hell, he doesn’t know anything about Saddler period. Alicia, on the other hand, does know all about Saddler’s crimes, but she doesn’t say anything. As a result, the petrification will eventually wear off, and you can bet your ass that Saddler will go after our harem lead and his babes again.

— Later that day, the group is about to go meet up with Edelgard, but Rem also wants to reveal her secret to Alicia. After all, they’re nakama. Diablo doesn’t think it’s a good idea, but it’s the loli’s call. As he watches the three girls hug, he can’t help but get a bad feeling in his stomach. He shakes it off, however, and just attributes this to him being socially awkward.

— At the very top of the tower where the girls first summon Diablo into this world, Edelgard waits patiently for Diablo and Rem.

— Out of nowhere, Shera insists that Rem stinks, so they go and take a bath. In this fantasy world, there are no such things as bathing suits. As a result, the girls all get naked.

— If you click here, the FBI will be outside your door.

— Rem insists over and over that catgirls like herself do not have smelly sweat. She also claims that her sweat isn’t salty. Naturally, Shera would try and verify this statement by licking her friend’s body. What? Girls don’t lick each other in the showers?

— In retaliation, Rem fondles Shera’s breasts? Wait, this is retaliation?

— And like I said up top, Krebskulm is actually a loli. I bet you she’ll become yet another haremette somehow. Just you wait and see…

The Master of Ragnarok & Blesser of Einherjar Ep. 9

— Mitsuki goes to see her best friend’s sister Saya. What’s special about her is that she has a Ph.D in archaeology. Obviously, everything she says is gonna be pure gold.

— After listening to Mitsuki’s wild story about Yuuto being stuck in Yggdrasil, Saya draws parallels between Yuuto and Surtr, the jotunn who plays a big role in bringing about Ragnarok. As a result, Mitsuki starts freaking out. Oh no, is Yuuto gonna die?!

— Back in Yggdrasil, Yuuto feels guilty over the loss of lives in the last battle. Meh.

— Meanwhile, the girls plan to present him with a fancy new cape. Oh boy.

— To nobody’s surprise, Loptr still hates the harem lead. He also hilariously blames his murder on Yuuto. He made me kill my own father! That cur!

— Near the end of the episode, Yuuto finally manages to get a hold of Mitsuki, who then tells him all about how she had a talk with her best friend’s cousin. The guy starts getting weirdly jealous and insecure. Like dude, that’s just a bad look.

— On the other hand, Mitsuki tries to confess her feelings, but she goes about it in a roundabout way. Yuuto may know a thing or two about military strategies, but it looks like he’s clueless when it comes to Natsume Soseki.

— Confused by his last conversation with Mitsuki, Yuuto goes on a walk to clear his head. When he wanders into a bar, he meets a girl who looks a whole like Mitsuki… but that makes no sense, because his childhood friend is Japanese.

— Felicity’s boobs somehow come to life and knock an orange out of her fruit basket.

— Mitsuki gets her breasts groped, because that’s what BFFs do. 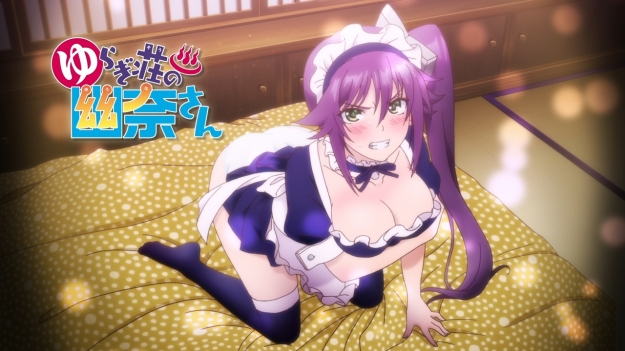 — Genshiro lets us know that you can definitely impregnate a ghost. Good to know.

— What he’s worried about, however, is whether or not his bride-to-be has been defiled by another man. ‘Cause y’know, we still put too much stock in a person’s virginity.

— For a guy who wants to impregnate a ghost against her will, it’s odd how Genshiro can’t even say the word “sex.”

— Meanwhile, Sagiri tries to rescue Yuuna, but she gets sucker-punched in the back by Oboro. So much for being a sneaky ninja…

— Why does this sucker punch have to tear up her clothes? Because you want to see her tits, that’s why.

— A fight ensues between the two girls, but it just results in more attacks to Sagiri’s ample bosom. Has our precious ninja ever managed to win a single battle onscreen?

— When we next see Sagiri, her clothes are ripped up in all the right places. And yes, Oboro wants Genshiro to impregnate the ninja girl too.

— Yuuna tries once more to sacrifice herself for the sake of her friends, but she does so with tears in her eyes. As a result, it’s time for Kogarashi to get serious. 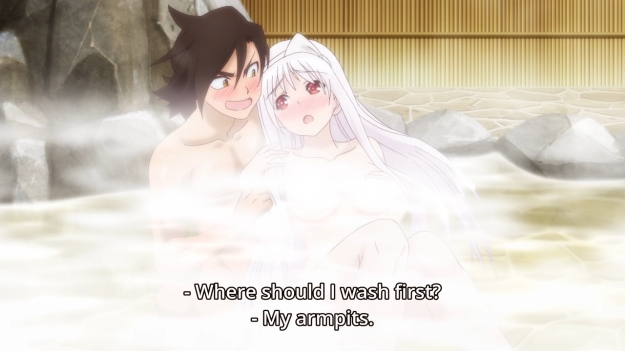 — He taunts Genshiro by telling tall tales about how he’s done lewd stuff to Yuuna. This causes the latter to summon the power of the black dragon god and thus boot Kogarashi into the rock ceiling. It almost seems like Kogarashi did this on purpose in order to free himself from his restraints. But look, if he’s strong enough to withstand Genshiro’s attack, why isn’t he strong enough to just free himself in the first place?

— Kogarashi then defeats Genshiro in one punch. Yep, just one punch, man.

— We then get some stupid flashbacks from Oboro all about how it’s “their” mission to help the Ryuuga clan secure a powerful offspring. As a result, “they” are gonna try and fight Kogarashi.

— So why will Oboro succeed where Genshiro failed? Well, Kogarashi claims that he can’t punch a girl, and look who just happens to have boobs?!

— Wow, I’m so shocked… who would have guess that a character who looks and sounds like a woman in a harem anime is actually a woman?

— Not only is Sagiri useless in combat, she’s pretty dumb too.

— Luckily, Kogarashi doesn’t have to break his one rule, because Yaya and Nonko eventually show up to help their friends out.

— Eventually, Oboro calms down and realizes that it’s foolish to try and challenge a guy who could defeat Genshiro so easily. But first, they need to convince the guy to give up on Yuuna and Sagiri. 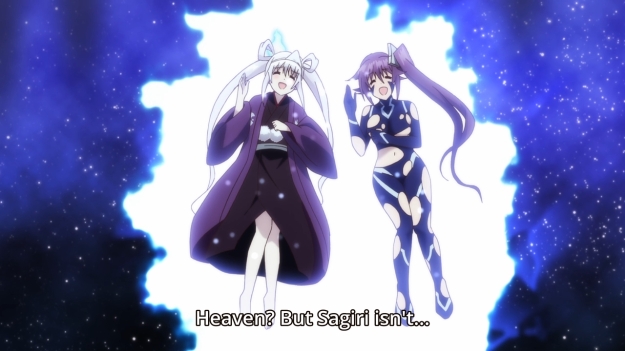 — As a result, they hatch a silly charade in which the two girls were so happy to marry him that they just ascended to heaven right there and then. For such a powerful black dragon god, he sure is stupid.

— After everything is all said and done, Kogarashi once again reaffirms his promise to make Yuuna happy. Dude, if you like her, just admit it.

— Meanwhile, Oboro continues to fixate on Kogarashi, so when we next see her…

— …she’s naked in Kogarashi’s futon. Look, if they’re not going to let Genshiro impregnate Kogarashi’s haremettes, then he may as well impregnate Oboro. Fair enough, right? 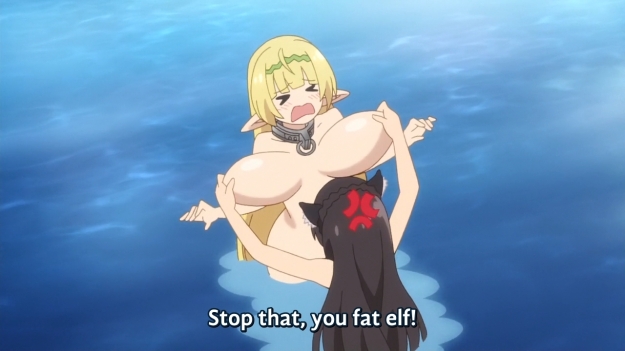