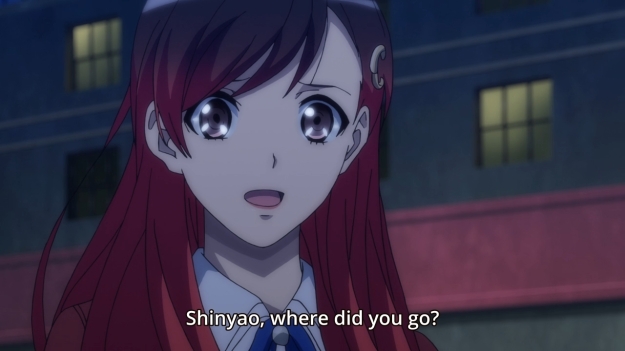 It’s hard to get excited about this anime anymore, but like a lot of shows at this point in the season, I just tell myself that it’s almost over.

— If you’ll recall, Haysin and Backup — yes, the hacker kid’s name is Backup — are competing to see who will become stronger, Ton or Shinyao. What do you get if you win? Beats me. Haysin simply says that everything is on the line. Okay.

— Speaking of Ton, look at our heroine’s precious face.

— Midnight Sun has analyzed the howls of our precious werewolves, and as a result, they learned that Shinyao intends to drop by the cafe. The place is thus surrounded by totally conspicuous men in suits. It’s like they’re not even trying to be competent. Nevertheless, Ton won’t be united with her friend anytime soon.

— In the meantime, Greg Gregory — again, that’s his actual name — asks the Twilights to help him with the troubles at the museum. This is basically just an excuse to see Ton in action. Believe it or not, the girl is now stronger than the boys. The only issue is that she doesn’t have much stamina.

— By the way, Van Helsing is still alive. I should’ve figured. And even though Vlad showed him mercy, he still intends to fight the Umbras at any cost. How many times do we have to teach you this lesson, old man?

— This anime is so half-assed. For instance, take the composition of this scene. Practically all of their faces are obscured for no good reason.

— They’re hiding! And while they’re hiding, Shinyao thanks Chris for showing her around London. Sigh.

— Our heroes decide to hatch a plan. Since Midnight Sun is tracking Ton’s phone via the Snowmary app (why not just uninstall it?), the guys decide to pull a little misdirection on the bad guys. Luke and Toryo will head to Camden in order to lure the enemy’s eyes from Ton. As a result, she can meet up with Shinyao in a totally different location. Yeah, they’re gonna screw this up somehow.

— Y’see, Haysin saw this all coming somehow. That’s why he summoned those weird creatures from the museum. One of them is literally just waiting for Ton to show up. She defeats it with ease, but Haysin never intended to harm her. Not yet, anyways. I’m still not exactly sure what he wants with “the second coming of Sha Rijan.” Yeah, that’s the other major problem with this show. Our villains have pretty no compelling motivation to do what they do.

— Elsewhere, Shinyao and Chris can hear that there are trouble in the distance. In the end, he is unwilling to swallow his pride to accept his brother’s help. As a result, he also want to use himself as a decoy. God, don’t we have enough decoys? Plus, is it really all that smart to leave the girl all by herself?

— Luke and Toryo eventually run into Haysin’s other toy. Up until this episode, I thought that our bishies were pretty capable, but all of a sudden, they’re completely useless now. Luke begs for Vlad’s help, but the problem is that Ton insists on coming along. Everyone seemingly agrees that if she doesn’t show up, the boys are toast. Even though this means she won’t be able to meet up with Shinyao, she feels that her friend would want her to help the bishies. Well, if you say so…

— And yes, Ton does extinguish the flaming minotaur.

— Anyways, I half-expected Shinyao to get captured as soon as Chris left her side, but nope, they’re just going to get surrounded right now. Despite all of Wayne’s best efforts, Backup still easily tracks down Shinyao’s position. The girl tries to protect her werewolf bishie by not putting the fight, but the guy foolishly tries to save her. And just like that, he gets a bullet right in the head.

— Now, I want to be like, “Damn, holy shit, he just died!” But I almost feel like the story’s going to cop out and bring the stupid werewolf back to life somehow.

— By the time Ton gets to the designated meeting spot, all she and her bishies find is a lot of blood on the ground. Welp, maybe you should’ve prioritized your helpless BFF over some hot dudes. Didn’t you get the memo? Besties before testes, sister.