I don’t feel so good, Felicia.

How Not to Summon a Demon Lord Ep. 11

— Alicia hopes to awaken Klem’s murderous nature by turning Shera over to Saddler. But since Rem came along, she’ll do just as well. As for how this will work, Saddler will torture Rem, and this will stir up Klem’s hatred. And if she hates, she will become evil again… something like that. Hate leads to the dark side, yep yep.

— Just to kill some time, we see Rem try her best to escape from Saddler’s clutches. But we all know it’s pointless. We all know she has to suffer for this critical plot point so that Diablo can ultimately save her. When has any of these girls ever managed to save themselves?

— Later, Rem wakes up to find herself in a cage with Klem. She opens up to the demon loli that while carrying Klem inside her was tough, she doesn’t want her newfound friend to ever change. Yeah yeah, very sweet and touching.

— Unfortunately, Saddler has dragged both girls to his torture house of fun. The thing is that Klem could probably use just a fraction of her power in order to save Rem from these religious zealots. But Rem is stupid, so she insists over and over that it’s better for her to get tortured and die than for Klem to take one person’s life. This is dumb on so many levels.

— First, you’re basically forcing your friend to watch you get tortured. Like what could be worse than that? Are we honestly morally opposed to executing torturers? Way to go, genius. Oooh, we gotta protect this loli so hard that we’ll subject them to extreme emotional… anguish… instead? Fucking A+ there, girl.

— Second, the good guys in this show are so goddamn myopic. It doesn’t take a genius to realize that Saddler and his goons have been torturing and murdering people for, well, probably years! Yeah, yeah, taking a life is bad, but can you imagine how many lives you could protect by taking Saddler out? But oh no, we should never kill anyone! Even if they are Hitler incarnate, you mustn’t! It’s this kind of stupid morality that leads to even more death and suffering.

— Anyways, Diablos is running around town, desperately trying to find his haremettes. We all know he’s not allowed to find them, however, until Klem has been triggered. After all, this adaptation can’t end without one big blowout fight between the two demon lords.

— Oh yeah, Edelgard is leading a giant army of Fallens against Faltra. The city’s only defense is a barrier erected by Celes.

— So in the end, Rem stupidly allows herself to die in front of Klem. This predictably enrages the demon loli, so she’s now become a full-fledged demon lord much to Alicia’s delight. The new Klem proceeds to completely vaporize Saddler just by staring at him. Unfortunately, the new Klem also has no control over herself, so her power is threatening to destroy the protective barrier around Faltra.

— Despite taking maybe five or six stabs in the back, Rem is somehow still alive. Well, they say cats have nine lives.

— Only now does Diablo arrive to the scene. Shera also joins him, so he tasks her with reviving Rem with a fat stack of potions. Good thing he spent that morning crafting them, I suppose.

— Anyways, this was a thoroughly frustrating episode. There’s nothing more annoying than painfully naive do-gooders making things worse for everyone with their good intentions.

— What do I think will happen next week? Well, I’m pretty sure we all have the same predictions. After a big, bombastic fight, Diablo will turn Klem back to her loli self. Rem is most assuredly survive, because c’mon, this isn’t a downer series. Most of all — and this is the hilarious part — I’ll bet anything that Diablo and the girls will somehow “redeem” Alicia so that she can return to the harem fold.

— Absolutely none at all. I’m as surprised as you are.

The Master of Ragnarok & Blesser of Einherjar Ep. 11 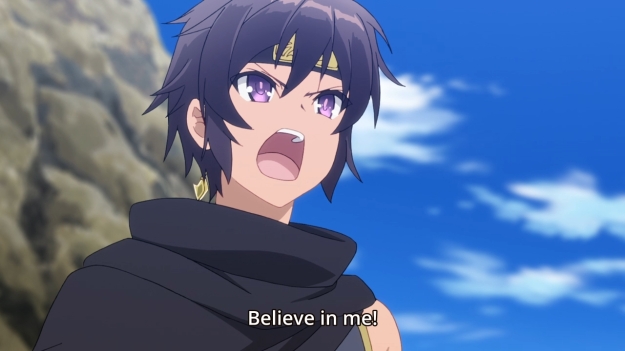 — Look, this is one of the worst shows this season, so I don’t want to waste too much time on it. I’ll just mention the important stuff.

— Things look bad for Yuuto and his clan, but all he has to do is deliver a rousing speech. Since he’s been a good ruler, his soldiers get a huge boost in morale.

— Sigrun proceeds to beat Steinthor with a trusty katana, because this is anime. Japanese weapons are just badass, man! Much better than a stupid giant hammer that probably weighs a hundred times more than a katana!

— Meanwhile, this dork is somehow still alive despite tumbling off a Windows XP wallpaper in last week’s episode.

–It comes down to a duel between Yuuto and Loptor, and our hero wins by tackling Felicia’s older brother. Very heroic.

— Unfortunately, Sigyn’s terrible singing and spastic dancing is working its magic again, and this time, she manages to free Yuuto from his bonds. As a result, he disappears right before Felicia’s eyes, leaving nothing behind but his phone. Well, if she ever learns how to use that thing, she can be just as good as him at ruling her clan.

— Back in the real world (or the present, I guess), Mitsuki just happens to be walking by Yuuto’s home at the right time.

— She quickly rushes into his room to find that her love interest is back… except there’s no way he’s gonna stay here, right? I think there’s a good chance he willingly returns to the other world in next week’s episode. But who knows, maybe he’ll drag Mitsuki along with him this time.

— None again. Like How Not to Summon a Demon Lord, we got nothing but delicious plot.

— Well, even though the other two shows are busy trying to tell their “well-written” stories, I know I can always rely on Yuuna and the Haunted Hot Springs to deliver on the juicy plot! We even get a beach episode this week!

— Right off the bat, we’re told that the teachers have allowed their students to wear whatever they want to the beach. What a school!

— Ninja girl proceeds to get peer-pressured into showing off more skin than she’s comfortable with.

— And apparently, she has to invite Kogarashi to go shopping with her, because it’s part of her ninja mission to befriend such a powerful guy. In the end, she finds it too embarrassing, so she makes up some story about how there’s a youkai at the swimsuit shop. Smooth.

— It’s just funny how these anime characters are forced to ask these awkward questions in person, but in real life, we all know we’d just shoot someone a message via our phones instead.

— By the way, we meet Urara, Sagiri’s friend. She’s also a ninja or whatever. I wouldn’t worry about getting to know her, because she’s just a side character.

— Sagiri’s first choice is something that looks like it came straight out of the 1890s. Not surprisingly, her friend disapproves. I’m just surprised that the store would even have something like that in stock.

— The next swimsuit looks flashy enough for a high schooler, but Urara still disapproves. 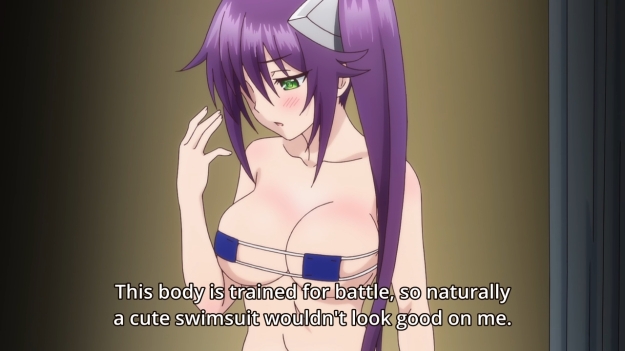 — For some dumb reason, Sagiri thinks that her “toned” body wouldn’t look cute in a swimsuit. First, her body looks no more toned than any other girl’s body in this show. Second, you’d be hard-pressed to find someone who doesn’t like toned bodies.

— But of course, Urara doesn’t make any the two aforementioned points. Instead, she just gropes Sagiri instead, because that’s what all girls do in the dressing room, right?

— Then all of the noise and clamor makes Kogarashi panic, so he accidentally pulls back the curtain to see the two girls in an uncompromising position. Uh-huh, accidentally.

— Anyways, it’s time for the school trip, and I love how chill these girls are. Oh, there are ghosts? Cool!

— The guys, on the other hand, must be mad jealous that Chisaki is impressed with Kogarashi. Why do I say that? Because they absolutely refuse to believe that there are actual ghosts in this world even though a book is literally floating in front of them. Rather, they insist that Kogarashi is somehow playing parlor tricks. What?

— So we get to the beach and Sagiri is embarrassed by all the attention she’s getting. Nevertheless, Chisaki is supposedly the hot one. Shrug, they all look the same to me.

— The girls then join Kogarashi and his obligatory male best friend out in the ocean. It’s all fun and games until a tentacle monster with a penchant for female swimwear shows up. How oddly specific… 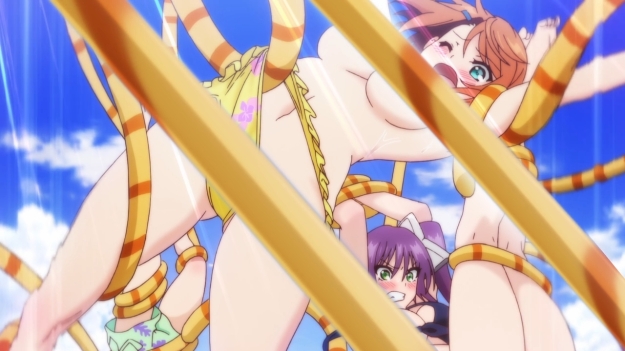 — Said tentacle monster proceeds to give aspiring doujin artists material to work with. Remember, we can’t show you too much on TV, but until you can buy the blu-rays to get rid of all the censoring, you can always let your imagination run wild!

— Meanwhile, Kogarashi has to dive 300 meters deep in order to save his haremettes from any further indignities.

— In the end, none of the girls are the least bit perturbed. I guess being attacked by tentacle monsters in Japan is just something you get used to.

— When Chisaki gets back on solid ground, she tries to sing Kogarashi’s praises to no avail. Her male classmates refuse to believe that the harem lead is as great as she claims. Gee, I wonder why.

— So the girls try to hatch some silly plan where Kogarashi will save someone during a courage test, and as a result, word will get around about his amazing heroics. But c’mon, who cares? It doesn’t bother the dude one bit that no one believes him. In fact, I bet you anything that Kogarashi would like to maintain a low profile.

— Anyways, Chisaki gets paired up with Kogarashi, so their plan falls apart right from the get-go. Yuuna also spooks herself, which just seems like an excuse to motorboat the harem lead.

— Urara then tries to test Kogarashi’s strength, which Sagiri opposes. This minor kerfuffle somehow leads to the latter planting her crotch right into Kogarashi’s face. On the other hand, Urara doesn’t fare much better. So this night has been a disaster right? Well…

— …you guys asked for a monster, so you got one. But we’ll deal with this next week. I’m sure Kogarashi will just beat the thing in one punch anyways. Then we’ll go back to harem-flavored slice-of-life nonsense.

1 thought on “Harem Something or Other Pt. 10: I can’t believe there is so much plot in my harem anime!”