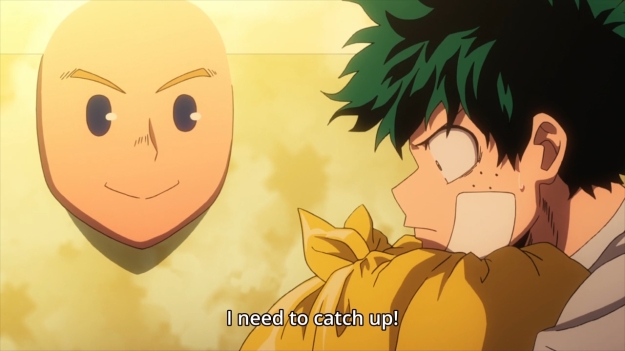 As a punishment for fighting, Deku and Bakugo get to miss everything. Their house arrest is more like a suspension from school. I never really understood school suspensions as a form of discipline. They just seems like a bad punishment, y’know? Kids shouldn’t lose out on their learning.

— The episode opens with some guy in his apartment being annoyed that everyone around him wears contented smiles. Whoever he is, he just seems kinda petty and pathetic.

— On TV, they’re talking about how the anxiety from All Might’s retirement mostly stems from the fact that Endeavor doesn’t really deserve to pick up the mantle. I mean, sure, but that just sounds kinda weird to me, because I thought the hero rankings factored in everything, i.e. strength, effectiveness (crimes solved), popularity, so on and so forth. So if Endeavor is ranked second, doesn’t he deserve it? If the rankings were completely determined by strength and strength alone, I could understand the public’s apprehension. Oh, this guy is at the top because he’s naturally talented, but he’s kind of a dick! Fair enough! But if you’re going to tell me that effectiveness and popularity is also in the rankings formula, then what are you guys complaining for? Endeavor’s at the top because you put him there. If you guys are so unhappy with him being the number one hero now, maybe you should reexamine how you got your results.

— Oh, this guy hears voices. He must be Twice.

— Anyways, he steps outside and sees a robbery in action. A hero tries to prevent the crime, but he’s overpowered by the group of villains. The thought here is that All Might’s retirement has led to more villainy. Bad guys are more emboldened than ever to do bad things. They’re even now forming factions and doing crimes together. I dunno, I guess this sounds like common sense for a simple show like My Hero Academia. If there’s a drop in law enforcement, then crime rates are gonna spike, right? 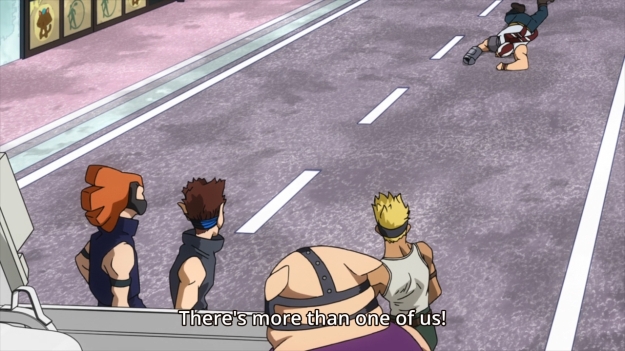 — But this strikes me as a symptom of a bigger problem. After all, if the bad guys are only striking now that All Might’s gone, that would mean that they’ve always been there. They’ve always been lurking in the shadows, just too afraid to do anything. But throughout history, it hasn’t always been the case that crime rates are directly linked to law enforcement. If anything, crime rates are linked to a nation’s overall health. Some people are born bad, sure. Y’know, chemical imbalances or the lack of empathy will make certain people more prone to crimes. But for the vast majority of us, we are born innocent. What makes us turn to crime is a confluence of factors, internal and external. Social factors, economic factors, blah blah blah. Y’know, crime doesn’t have to be solved by beating up baddies and striking fear into them. Rather, the nation should try to understand why a bunch of petty thieves would want to steal stuff in broad daylight.

— But of course, I more than realize that I’m going way beyond the scope of what a Saturday morning cartoon can truly accomplish. In the real world, criminal motivation can’t just be “Well, we just wanted to!” But for a kids’ show like My Hero Academia, where things are more black and white, then I suppose this suffices. The bad guys are bad because they’re bad.

— Boy, there sure is a huge focus on the villains at the start of this week’s episode. But unfortunately, like I’ve said before, none of the antagonists in this entire series have been very compelling. They’re all very silly and cartoonish. No one is truly scary. No one has a point that makes me think, “Well, you’re a psychopath, but there’s a kernel of truth to what you’re saying…”

— Even when I see Dabi torch a bunch of criminals who aren’t up to his standards, the scene just feels too anime edgy.

— Good lesson. Always wrap up, kids. You don’t want to catch the funk.

— Man, I could use this ability right about now. I need to do a quick end of summer cleaning for my apartment…

— Trust nobody. Not even yourself.

— Using the word “real” here is the real problem. It’d be more accurate for him to say that he hasn’t been able to determine if the original Twice survived. As for whether or not it’s the “real” him, eh. That’s just philosophical wankery.

— He then complains that heroes can only save good people, so there’s no place for a person like him in society. I dunno, man, it sounds like you haven’t even tried to be helped by the good guys. There are people who sabotage themselves just so they can pity themselves. Hard to respect those guys.

— Looks like we have the next big baddie for Deku and company to take down.

— Oh, thank god. The focus is now back on the kids. I usually like to follow the villains in other superhero stories, but I dunno, I just find them incredibly boring in My Hero Academia. I mostly watch the show to see how the kids grow up and develop into the people they want to become. The bad guys, on the other hand, are so lame.

— Class B apparently all passed and got their provisional exams. Kinda silly to be smug about this, though. “Haw, haw, two of your classmates didn’t pass, so now they can’t help us fight crime and make the world a better place! Jokes on you!” Yeah, that’s just kinda stupid.

— I like how everyone in Class 1-A looks relatively normal, but when you step outside of the class…

— Too bad Nezu’s speech is putting me back to sleep.

— This is like a freak sideshow at a circus.

— There’s a big focus on this new character, but the anime won’t show us his face just yet. I don’t read the manga so I have no clue if I’m supposed to be hyped or not. But knowing me, probably not.

— Anyways, the kids are going to spend more time in the field, doing heroic stuff. This is an opportunity to let the side characters in Class 1-A shine, but at the end of the day, it’ll be Deku plus whoever against the big, bad baddie of the arc. I just wonder who’ll be joining him. Probably that new character.

— So the new guy can phase through walls. He seems cheerful enough. Kinda looks like the Fallout mascot.

— After a brief timeskip, Deku returns to class with a head full of steam. The kid’s one huge superhero nerd.

— It turns out Aizawa just didn’t want to go too in-depth about the work studies until Deku was back. Welp.

— The door then opens and a bunch of third years march into the classroom. They’re here to tell 1-A all about their experiences. Oh boy.