Just a couple of brothers roughhousing with knives. Nothing to fear, folks!

— I think Yuliy’s most remarkable feat is somehow emerging from the pool of water completely dry. Screw the Ark, ’cause that’s the real magic!

— The Ark looks almost as if it contains digital data. Like maybe it’s something from the distant future.

— Oh hey, it’s Ryoko (and that other guy)! Unfortunately, Yevgraf’s airship is also headed in the same direction. But this is fine. The show’s about to end, so I’m hoping for an explosive conclusion. At the very least, everything should look very pretty. It’s just too bad that this show got stuck with Netflix. It’s nothing jaw-dropping, but it should’ve gotten a little more hype.

— Using the power of the blood pact, Yevgraf commands Mikhail to murder Yuliy and retrieve the Ark. Try as he might, the older Jirov brother cannot resist his master’s command. While I’m fairly confident that Yuliy will lose the Ark (and thus turn the Willard’s Plan B), there’s no chance in hell that Mikhail would seriously hurt his brother. As such, there isn’t really much tension here. Stories pretty much limit their options by playing it too safe.

— The good guys meet up, but they don’t have the luxury to stand around and talk. Unfortunately, that’s what they pretty much proceed to do. Why? ‘Cause it’s all Yuliy’s fault. For some stupid reason, our hero wants to settle the score and face the bad guys head on instead of running away. Okay, I get it. Yevgraf murdered your village and turned your brother into a vampire. But we have to be smart about this. You don’t need to be genius to know that maybe it’s a bad idea for one guy to go up against Yevgraf and his army of vampires. I’m sure Yuliy is very confident in his own skills, but last I remembered, he couldn’t even beat his own brother in direct combat.

— Anyways, Yuliy’s cockiness forces Bishop to suddenly puts a gun to Ryoko’s head. Oh no, not our favorite werewolf-loving girl!

— I bet you anything that Bishop’s actually a vampire. Yuliy had said in a previous episode that the blond man reeked of vampire blood. Bishop tried to play it off as “Oh, that’s just because I’ve killed lots of them!” but we all knew he was full of it.

— Anyways, the rest of the Jaegers are hurrying to Sakhalin. I expect them to show up just in time for the final battle, but too late to prevent the Ark from falling into Yevgraf’s hands.

— Oh look, Plan B looks almost exactly like the Ark! It may as well be Ark 2.0. So Yevgraf’s going to get his hands on the Ark and power up. Then Yuliy will use Plan B to power up as well! The show can thus end on one big, shounen fight. I can’t wait. I think my biggest problem with Plan B is how it just happens to be sitting there in Dogville unbeknownst to anybody.

— So at first, it sounds like Bishop is trying to retrieve the Ark for the British government, but Yuliy tells him to cut the bullshit. As a result, Bishop reveals that he’s a vampire like we all suspected, but he nevertheless reverts back to being a good guy. He’s not here for the British government, but he’s not on the vampires’ side either. He just wants to get his revenge. I just find this whole situation rather funny, because these guys still have to hightail it outta there. Yevgraf and his army of vampires are still headed in their direction. Nevertheless, Bishop parks his ass down and starts opening up about his tragedy.

— Bishop isn’t wrong, though. Yuliy is being selfish if he just wants to confront Yevgraf all by his lonesome. Not only does he risk losing the Ark, he’s also placing Ryoko and Hideomi in danger. Sure, no one cares about Hideomi, but Ryoko, man! 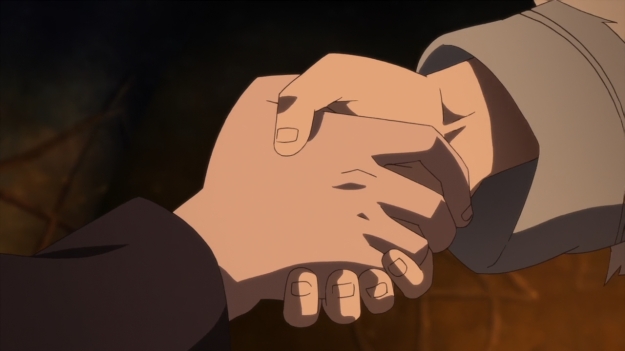 — But then Bishop follows up with, “Let me settle the score, too!” Ugh. Idiots.

— Meanwhile, Hideomi’s biggest concern is that our hero is willing to cooperate with a vampire. Tch.

— As soon as Yuliy emerges from the temple, he is greeted by the vampire lolis. Shortly afterwards, a brainwashed Mikhail immediately attacks.

— So everything is competently put together. The animation is top-notch, and the soundtrack suits the situation. The problem is that this just feels all too familiar. Yuliy will fight, but only to defend himself. He doesn’t have it within him to hurt his own brother, so all he can do is beg Mikhail to wake up. But good ol’ Misha won’t wake up… not yet, anyhow. At 9:33 into the episode, there’s still plenty of time to burn.

— So Mikhail grabs the Ark, rubs Yuliy’s blood all over it, then tosses the object to the vampire lolis. The two girls try to return the artifact to Yevgraf, but Bishop quickly grabs onto one of them and blows her brains out. Her sister didn’t even stop to try and help her. Welp.

— In the meantime, Yuliy and Mikhail continue to fight. Our hero loses his footing at one point, but luckily, Mikhail somehow manages to snap out of the effects of the blood pact just enough to save his brother and scold him. That’s convenient.

— I don’t really understand what Mikhail is going on about, though. He’s berating Yuliy for unsealing the Ark, but his kid brother never would’ve gotten this brilliant idea if Mikhail hadn’t gone on and on about how Yuliy needed to protect the Ark. I distinctly remember this conversation from the seventh episode. Mikhail probably meant protect the Ark by staying the fuck away from it, but he only has himself to blame for not being as clear as possible. 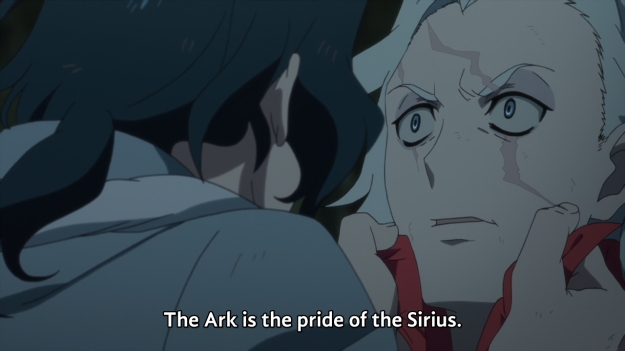 — Either way, Yuliy now believes that unsealing the Ark was the right thing to do so this is all moot anyways.

— If it matters, Larissa was the vampire loli that died. I think the other one is named Tamara.

— So what is Yuliy trying to say? He argues both for coexistence with humans and preserving the Ark as a symbol of pride for the Sirius. Is he hoping to share its secrets with the rest of the world?

— Meanwhile, Mikhail is mad because he always wanted to shield Yuliy from all sorts of suffering. He wanted to spare his kid brother from having to deal with any of this. Well, too late for that now.

— Elsewhere, Bishop gets the Ark back from Tamara. He even knows that he should destroy it right here and now, but of course, we wouldn’t have a show if these characters were sensible. So instead, he waits long enough for Yevgraf to show up.

— As Yuliy drags Mikhail out of the caves, the latter reveals that he’s contracted vampire AIDS. So is that what he did? He got in contact with the quarantined vampires essentially to commit suicide? Well, I guess I can kinda see why. At the time, Mikhail probably thought that death was the only way for him to free himself from the blood pact.

— Suddenly, a shot rings out. When Yuliy emerges from the caves, he sees Bishop with an arm right through his chest. Ah, we’ll miss him… not really. Even worse is that Yevgraf now has the Ark. But hey, we knew this would happen, didn’t we? Hell, the show telegraphed this the moment Willard found Plan B.

— I love how Bishop still sticks around long enough to say his last words. Yevgraf does eventually finish him off, but it still feels kinda silly.

— Yuliy charges at Yevgraf, but the vampire lord merely flies back to his airship. Mikhail tells his brother to protect Ryoko and Hideomi, but of course, our hero doesn’t seem to care all that much about the two humans. Instead, he would rather get into an argument with his brother while the vampires are closing in on them. Even Hideomi has to chime in and be like, “Can you two idiots stop squabbling for a second? We’re about to die here!”

— Luckily for these four, Willard and gang are finally here. See? Just in time.

— Look at Mikhail just float towards Yevgraf’s airship. This looks so silly.

— As Yuliy is chasing after his flying brother, Ryoko tosses him her sword. The crazy girl is content to play the cheerleader for this last and final act. What can I say, man? She’s the funniest and most amusing thing about this entire story. She’s essentially the “Senpai, notice me!” character. Maybe once this is all said and done, Yuliy will finally acknowledge her existence.

— So let’s take stock. First things first, Yevgraf has the Ark, and he’s about to use it to power up shounen style. You would think that the Ark is nothing more than a treasure trove of information, but this is anime!

— Right behind Yevgraf is Mikhail. The older Jirov brother deliberately infected himself with a seemingly incurable disease, so he doesn’t have much life left to live. He just wants to stop Yevgraf once and for all and thus protect his kid brother.

— Right on Mikhail’s tail is his kid brother Yuliy, a lost pup who has never stopped chasing after his brother. Nevertheless. he’s the only true Sirius left, so he’s fated to power up along side Yevgraf for one final battle.

— But in order for Yuliy to power up, he’ll need Willard’s Plan B. When they manage to get close enough to the airship, Willard smoothly descends down to the airship as if he’s an action hero still in his 20s. Boy, is he gonna be sore when we wakes up the next day. I’m a bit confused, though. Isn’t Willard trying to meet up with Yuliy? ‘Cause, uh, our hero’s still on the ground. Well, I can only imagine that Fallon will loop around with the plane to give the guy a lift.

— Unfortunately for the Jaegers, this oaf of a vampire is hoping to throw a wrench in their plans.

— As for Ryoko and Hideomi, the military man reluctantly admits that all they can do now is sit back and watch the final act play itself out.

— On their airship, Yevgraf proceeds to swallow the Ark as if it’s just any regular pill. Well, kudos to him. I’d probably choke on the damn thing.

— As soon as the artifact slides down his throat, the vampire lord’s veins start to pulsate with that delicious Ark-y power. I’m glad he’s so confident that the Ark isn’t poisonous or whatever, ’cause to me, he doesn’t look so hot.