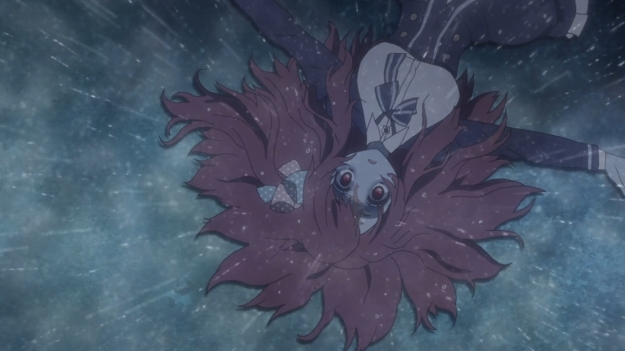 I’ve taken the last few Thursdays off from blogging, but I should probably stop before that becomes a habit. Still, I’d be lying if I said I wasn’t looking forward to getting this done as soon as possible so I can play more Hollow Knight. So let’s get on with it already, shall we? 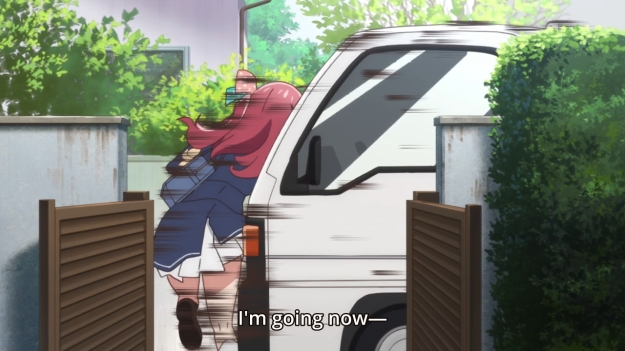 Sakura dreams of becoming an idol one day, but she’s too dumb to even check for incoming cars before attempting to cross a street. As a result, she’s now dead. In fact, she’s been dead for over ten years, but shh, she doesn’t know that yet. 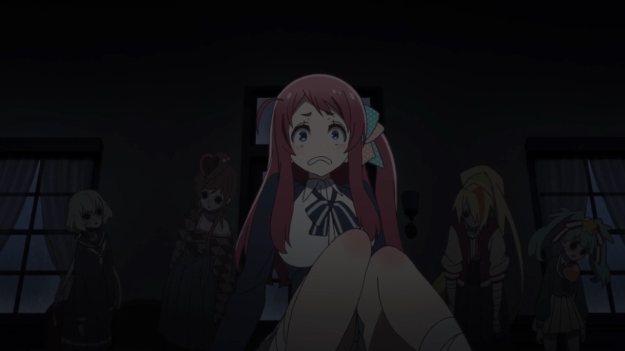 When the girl finally “wakes up,” she finds herself in a dark and creepy mansion full of — you guessed it! — zombies. Zombie anime babes, in fact. 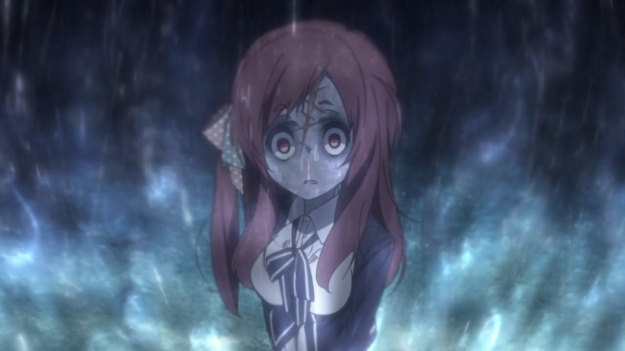 The girl is understandably scared out of her mind, so she runs outside and into the rain only to discover that, well, she’s a zombie too. 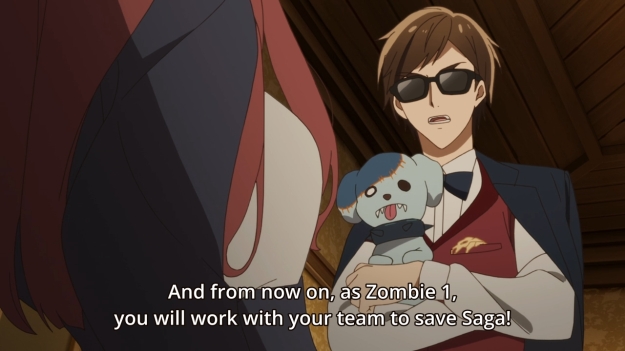 The next time she opens her eyes, she finds herself back in that creepy mansion, but it’s not so dark this time. Also, standing before her is Kotaro, the weird mastermind responsible for reviving these girls. How? We don’t know. Before I continue, I should add that Kotaro’s seiyuu has quite an extensive resume. But in this show, when Kotaro starts ranting and raving, he sounds exactly like Kaoru from Tada Never Falls in Love. I instantly had to look the guy up to confirm my suspicions. 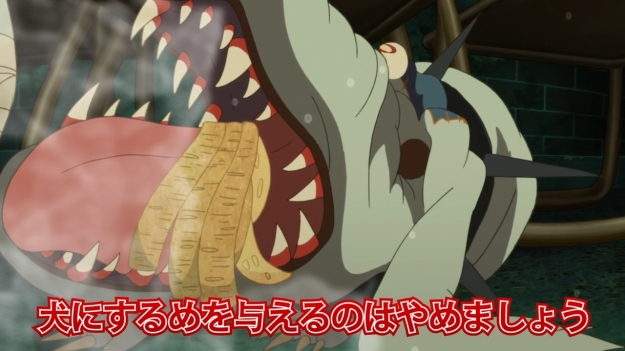 Kotaro also has a zombie dog, but don’t let its looks fool you. That dog becomes deathly vicious around dried squid. Oh yeah, dried squid is apparently a substitute for human flesh. Want to calm a zombie down? Give it some dried squid. Why? Beats me. This show seems to mistake being random with humor. 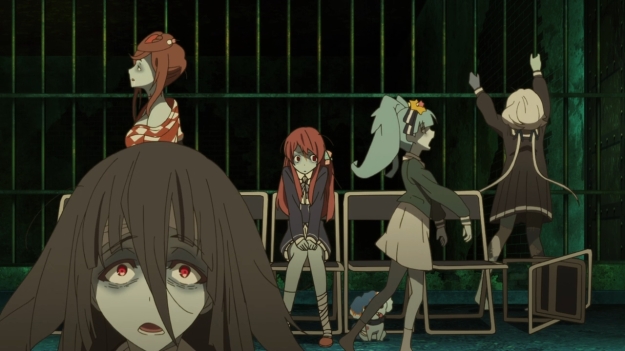 Anyways, Kotaro proceeds to reveal the show’s very flimsy premise: he has revived these girls in order to save the Saga prefecture from “becoming a thing of the past.” What does that mean? Beats me. I mean, this show is obviously dumb, so it’s not going going to bother justifying itself. It just wants to fall back on its gimmick for the next three months and maybe reel in some cheap laughs. Unfortunately for me, the gimmick has already grown rather long in the tooth. Like, okay, we have zombie girls singing and dancing. How funny. 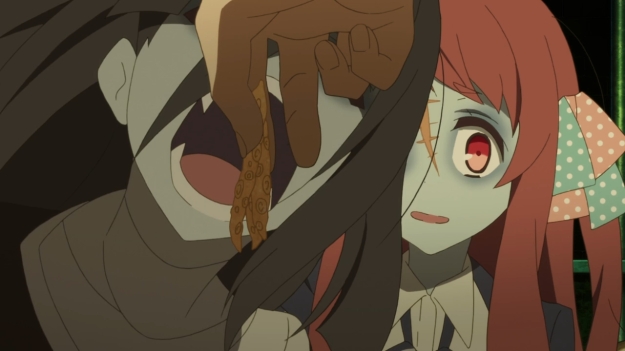 The big problem for the newly formed group is that Sakura is the only one who has truly awaken. For now, anyways. The main character is undead, but only in appearance. Our heroine can think, talk, and emote just like any regular person. The rest of the girls, however, act like generic zombies. Nevertheless, Kotaro is confident that they will all wake up one day. 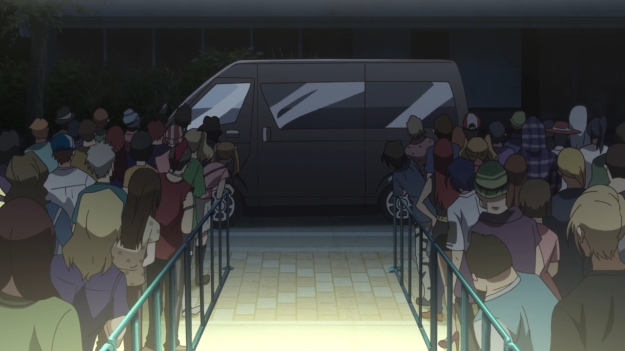 Before you know it, the girls are rounded up and brought to a musical venue for their very first live performance in front of a crowd of metalheads. Thanks to Kotaro’s godlike ability to apply make-up, the girls all look normal. They just don’t act normal. Luckily, this actually works out in their benefit with the metalheads. 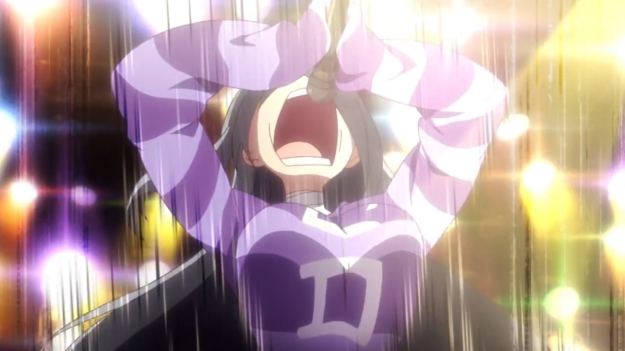 Once the girls get on stage, Sakura is sure that they will bomb. After all, they’re dressed up like idols in front of a crowd that wants to headbang. But when the death metal music kicks in, some of the zombie girls start screaming into megaphones and mics. The other zombies do their part and start doing something that the metalheads mistake for headbanging. 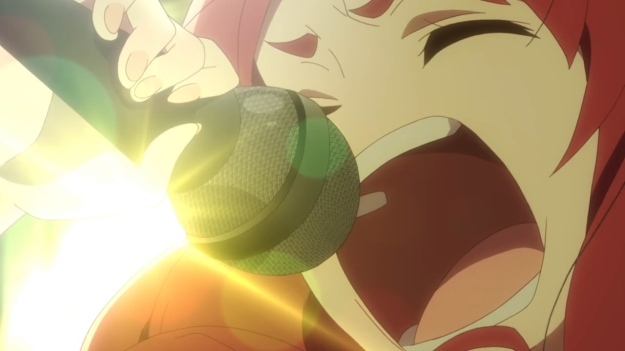 What can Sakura do but join in? And just that, the metalheads are no longer mad. I don’t know if the show thinks metalheads are just this dumb or what, but there you have it. 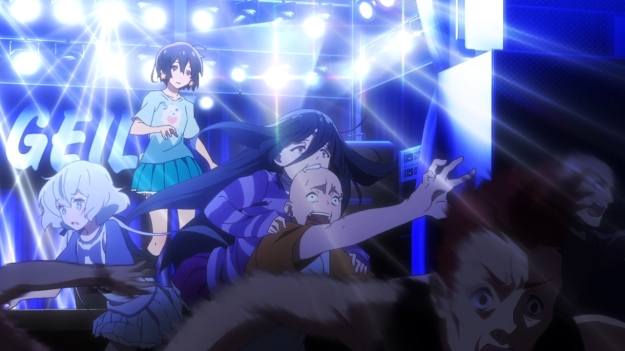 Unfortunately, it doesn’t take long before the zombie girls start acting like zombies. The first performance thus being a big failure anyway, but all is not lost. 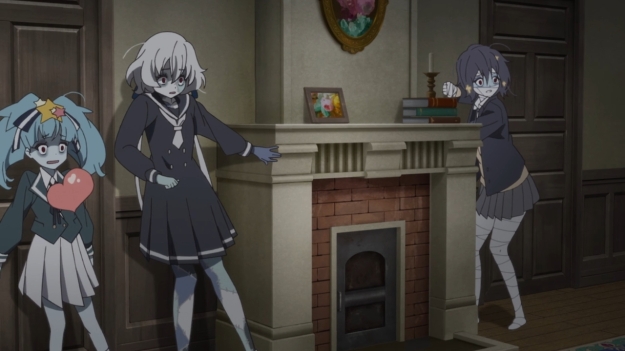 The next day, Sakura suddenly hears a scream from inside the house, and when she goes to take a look, it has become apparent that everyone has woken up. 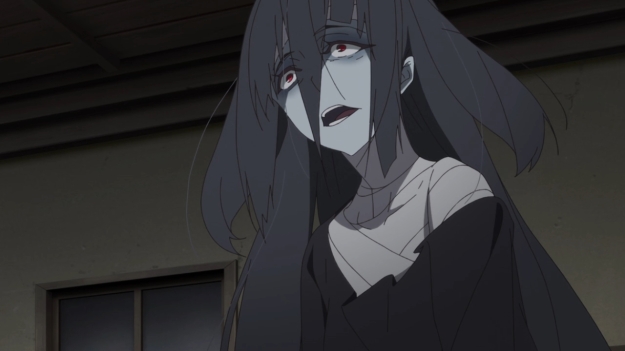 Well, everyone but Tae. Great.

The problem with this show is that it’s just plain boring. I don’t need scientific explanations on how Kotaro managed to revive these girls. I don’t even need him to explain why the Saga prefecture needs saving. But this show just isn’t very entertaining. When you have such a weak plot and almost no characterization to work with (for now, at least), you need one hell of a script or an amazing direction. But despite the kooky premise, I felt like the first episode’s execution was as plain as you could possibly make it. It was mind-numbingly plain. For a show about dead girls tricking idiots into headbanging, where was the dark humor? And I know this isn’t a horror anime, but c’mon, a little horror wouldn’t hurt. A little horror would actually make the humor a little funnier, don’t you think? There’s nothing remotely challenging about this show. You just have a bewildered girl and a raving lunatic. What can I say, man? This just didn’t work for me. I’d rather force myself to see what Ash and Eiji are up to than see another episode of Zombieland Saga. Maybe the shows that are premiering next Thursday will be a little more exciting.

1 thought on “What I Watched Today: Dead idols should stay six feet under”