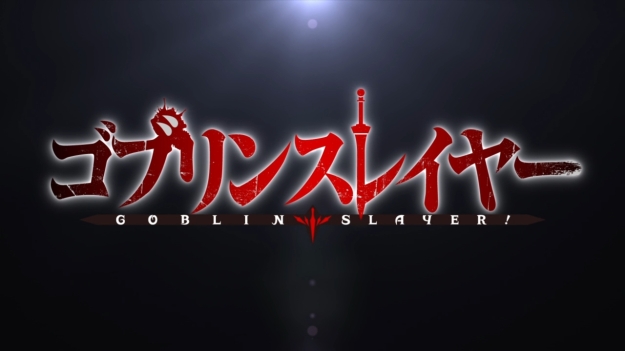 Imagine playing some RPG for the first time, not knowing anything about how the genre works, and plunging yourself deep into the first dungeon. Oh no, the goblins are overpowering us! Oh no, we died! Time to reload our save file and try again! We just gotta rest up at the inn and our HP/MP will be maxed out! No big deal! We got this! Yeaaaaaah, that shit doesn’t happen here. If you go into a goblin’s den inexperienced and unprepared, you’re going to die… assuming that you’re a dude. You ain’t reloading. You ain’t gluing that arm back either. Hell, if you’ve been poisoned and you don’t get the antidote anytime soon, your allies may as well put you out of your misery. There’s no coming back from that. Worst of all, if you’re a woman, you’ll be captured and raped endlessly. Hoo boy, that is not fun to watch. Look, I know terrible things happen in the real world. That doesn’t mean I like seeing them happen in front of me. So I dunno, I don’t necessarily mind Goblin Slayer‘s pragmatic approach to adventuring, but it’s a tough swallow. Furthermore, I have a hard time wrapping my mind around the fact that these adventurers can be so blase. You’d think they would know better.

Why do foolhardy rookie adventurers keep putting themselves in these unwinnable situations? Okay, the first time it happens, you’re shocked, you say your prayers to whatever gods you believe in, then you tell yourself, “Hey, let’s not do that dumb thing. If I’m gonna be adventurer, I’m not gonna do that.” Right? I mean, that makes sense to me! Terrible things happen all the time, but I gotta know my limits. But at the end of the episode, our heroine — we just know her as Priestess — makes it sound as if this is a regular occurrence: “A party of rookie adventurers going out to slay some goblins only to end up slaughtered…” We then see three happy-go-lucky adventurers walking in the opposite direction of a cart full of traumatized rape victims. I mean, the story doesn’t spell it out to us, but it’s obvious that those three are on some sort of maiden quest. Are they just dumb or what? If you can’t fight, then maybe you should raise money to hire people who can. There’s more than one way to skin a cat. Heroes don’t necessarily have to be warriors. 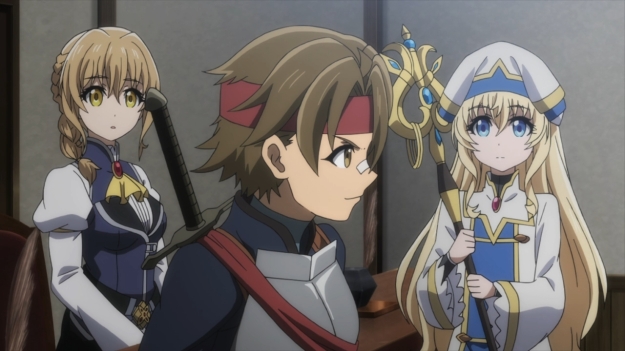 Even the lady at the guild obviously thinks that it’s a bad idea for a bunch of Porcelain-ranked adventurers to tackle a quest involving goblins. Unfortunately, she only puts in a minimal effort in stopping Priestess’s new friends from throwing their lives away. Don’t you think she would have a moral obligation to try a little harder? Well, maybe if these fools won’t try, nobody else will. I get the sense that other adventurers don’t want to deal with these quests because they’re not worth the effort. Goblins attacked a village, huh? Well, is the reward even that great? How much can a village honestly pay out? The hopeful, rookie adventurers — like the ones that we see die — are young and idealistic, but the experienced veterans are probably jaded. Even when Goblin Slayer successfully takes down a few goblins with gasoline, he notes that the cost was too high for the meager results. Luckily (or maybe not so luckily), he’s motivated by hate so he does the job anyway. He takes on these quests because he downright abhors goblins. I guess we can’t exactly say the same about the rest of his kind.

— You’re considered an adult at the age of fifteen, huh? Hmm…

— The story opens with our heroine visiting a guild. You get an ID tag, you pick up quests from a bulletin board, then you find other adventurers to join. Feels like a modern RPG. Y’know, just because this is how it’s done in video games doesn’t mean that our stories have to be the exact same way. I’m just dismayed by the lack of creativity, I suppose. A video game’s primary concern isn’t storytelling. It’s to be fun. This sort of thing doesn’t necessarily translate well to other storytelling media, and it’s just silly to see the same damn setup over and over. 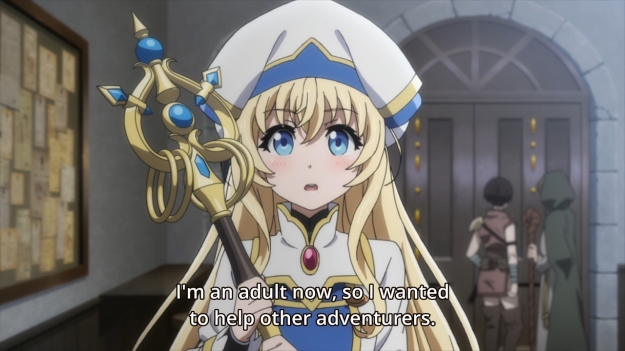 — I still don’t know our heroine’s name. All I know is that she’s a priestess. I guess that’s what I’m gonna call her for now.

— Jesus Christ, could you guys wave your death flags any harder?

— As expected, Priestess’s party gets overpowered. First, the mage goes down. Then the warrior loses his weapon and gets swarmed. Last but not least, the remaining girl (probably a monk class) is brutally raped. I dunno, I have to rethink whether or not I wanna keep blogging this. If the story keeps up this level of wanton brutality, then it’s just not fun to watch. I’m not saying that the show is bad… yet. Whether or not something is fun to watch, however, is irrelevant to its badness. A bad show can still be fun to watch, and likewise, a good show can be no fun to watch (show me who has a rocking good time watching Grave of the Fireflies). Point is, if every episode leaves me feeling miserable, then it’s not worth the effort. Like most, I don’t like seeing people suffer, real or not. Like most, I don’t enjoy watching innocent people being killed or raped.

— Great, now our heroine has to go and piss herself out of fear. I’m glad we got a close-up.

— Finally, Goblin Slayer shows up and starts murdering everything left and right. He even has to put the mage out of her misery.

— Nobody has actual names in this story, apparently. So far, it’s just Priestess and Goblin Slayer. Hell, we don’t even know what Goblin Slayer looks like.

— With the help of Priestess’s Holy Light, Goblin Slayer manages to wipe out the entire dank cavern full of goblins. He then to proceeds to kill the little ones as well. Yep, he kills them all. In response to Priestess’s inquiry, sure, he can imagine there being a good goblin somewhere in this horrible world, but he’s not going to waste his time looking for one. Shrug, what can I say? It’s fantasy. Maybe it’s very much the case that goblins are genetically programmed to be evil or whatever.

— I do like the shot of Goblin Slayer dragging his club across the room and thus tainting Priestess’s staff with blood.

— All the girl can do is cry, because she’s obviously in way over her head. She couldn’t save her party, she had to witness death and rape, and even children had to die in front of her. Even though they’ve managed to save the kidnapped girls, it’s not like she can really do anything to heal their souls.

— And yet, we immediately see Priestess in good spirits the following day. The girl walks right into the guild, greets Goblin Slayer, and even proudly shows him how she’s bought herself some chainmail. This girl’s going to keep on adventuring. I guess her spirit is just that resilient.

17 thoughts on “Goblin Slayer Ep. 1: Give me my light-hearted fantasy RPGs back”