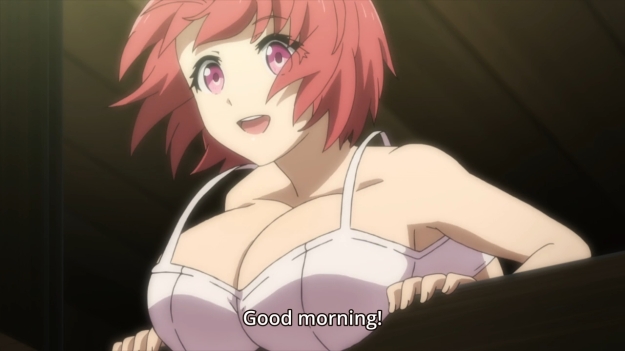 ‘Cause what goes better with murder and rape than hot, sexy girls? We’ll start by adding a big titty childhood friend to the cast.

— Well, that’s a nice warning to start off my morning.

— This kid is probably Goblin Slayer in his youth. I don’t know why the show is going to such lengths in order to obscure his face. Who cares? Unless he’s a goblin himself — which might have been a decent twist — he’s probably just another generic hot anime dude.

— Lemme guess, the girl returns to a village destroyed by goblins. The boy grows up to hate goblins while she becomes another generic hot childhood friend. But of course, Mr. Goblin Slayer is too busy murdering goblin children to bone the girl who has always loved him.

— Well, we got the generic hot childhood friend part down. Christ, what do you eat to get those proportions?

— Nobody has a name in this show, but I still don’t know her title, if you get my meaning. So for now, I’m just gonna call her Childhood Friend. Anyway, she tells us that Goblin Slayer always checks for goblin footprints in the morning. It’s a wonder why he’s the only person who is this paranoid about goblins when they seem to cause mayhem and destruction everywhere they go. Everyone else is just so carefree.

— You know what the goblins feel like in this world? Bedbugs. No one takes them seriously until they strike. 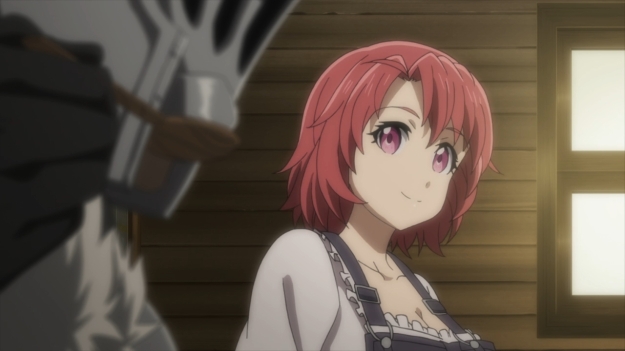 — I get being prepared, but the guy must have some kind of mental illness if he insists on wearing a full set of armor to the dining table. Does he sleep in that thing? Does it stink to high heavens? After all, he does smear goblin blood all over it on his hunts.

— Maybe society should invest less on adventurers and more on security to keep itself save. I mean, if the first episode is anything to go by, the goblins look pathetic. They live in dirt holes with barely any technology. What? Some poison and spears? Gimme a break. I understand huge numbers can be overwhelming, but maybe villages should merge and become cities, cities should become metropolises, so on and so forth. Maybe these settlements should then have high stone walls and guards patrolling said walls at all hours. This show wants to be realistic about rape and violence, but it’s not realistic at all about humans’ ability to adapt. We’re the OG goblins of our world, man. We’re the ones who breed like mad then rape the planet. Don’t try to take that distinction from us!

— Yeah, you gotta go to the guild in order to find an adventurer willing to exterminate the pesky goblins plaguing you. And even then, you have to wait days until someone takes up the job. Goblins are treated like bugs that nobody wants to deal with, because the pay is too low. Again, if this is such a huge problem for society, there should be some sort of government that you pay tax to — a government that will just automatically protect you from bedb–… I mean, goblins. But in these generic fantasy anime, there’s always a guild and there are always adventurers, so the guild board has all sorts of dumb, inane requests that should just be a regular job for a day laborer instead.

— The Guild Lady likes Goblin Slayer simply because he’s willing to take on all these menial goblin-slaying jobs. She beams whenever he enters the building. Hah, putting together a harem by murdering goblins. That’s a new one. 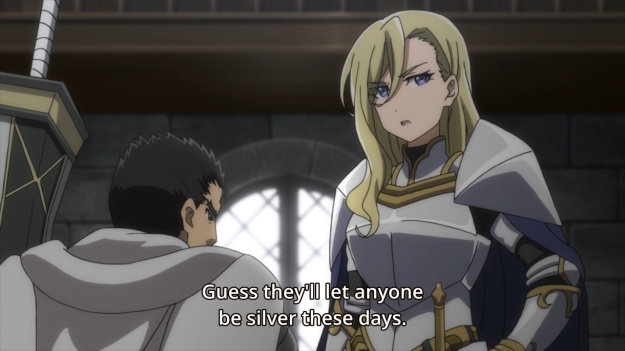 — Other adventurers look down on Goblin Slayer because, well, he only fights goblins. I swear, the humans in this show are so brain-dead. Or they’re just bad adventurers. In every lame ass JRPG that you can play, people become adventurers because they want to help people. But in this show, they just care about money and the prestige of taking down strong mobs. And considering how you have to depend on these losers to protect you, no wonder society is stuck in the medieval age.

— Still, you have to wonder who decides the rankings for these quests. If the Guild Lady (or whoever’s in charge) knows that newbies can’t normally handle goblins, maybe they shouldn’t be considered porcelain-ranked quests.

— So apparently, the Guild Lady warns the newbies not to take the goblin slaying quests, but they can choose to do so anyway. That’s like telling a little kid that they’re not old enough to drive a car, but not stopping them from getting behind the wheel.

— Goblin Slayer doesn’t rush to the guild board, because he knows that there will be plenty of left over goblin-slaying quests. But I dunno, if idiot newbies are gobbling them up, maybe he should beat them to the punch. Think about it. If they fail, the girls will just get raped and give birth to more goblins, right? Well, he probably doesn’t care whether they live or not. He just cares if he can kill more goblins.

— Oh no, my weirdo childhood friend has made a new female friend!

— So Priestess, still probably a newbie, starts trying to argue with Goblin Slayer about his tactics. 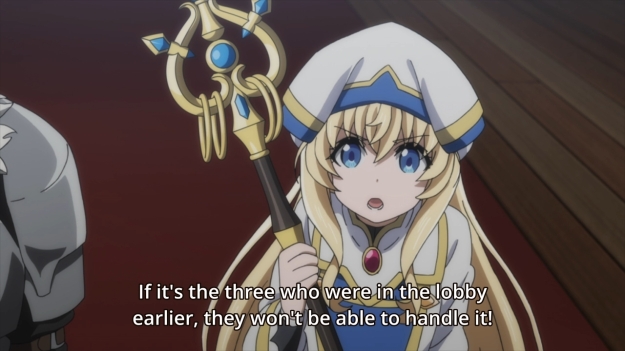 — To nobody’s surprise, three newbies take a goblin-slaying quest, and Priestess is worried about them. Unfortunately, she can’t change her partner’s mind so those three are as good as dead and/or raped.

— C’mon, does a dungeon full of goblins like this look like something that the lowest-ranked adventurer can handle? The funniest thing about this show is that goblins aren’t even the biggest threat. Rather, it’s human ineptitude. The show wants to be so solemn and realistic about questing as an adventurer, but the stupidity here is comical. The selfish, egotistical adventurers combined with the guild bureaucracy’s poor threat assessment of the quests are why people keep suffering. As a result, I have a hard time taking any of this seriously.

— So there we go, Goblin Slayer’s village was destroyed and his big sister was raped by goblins. Childhood Friend only survived because she had gone to the big city.

— At least all the sexual violence is kinda happening offscreen in this week’s episode. Kinda. I hope I didn’t speak too soon.

— Again, kinda. For some reason, we needed to see what had happened in last week’s episode again while Goblin Slayer goes on his rant about how all goblins deserve to die. It’s only been one week, guys. I haven’t forgotten.

— Oh what? Some of the newbies survived? Good on them, I guess. 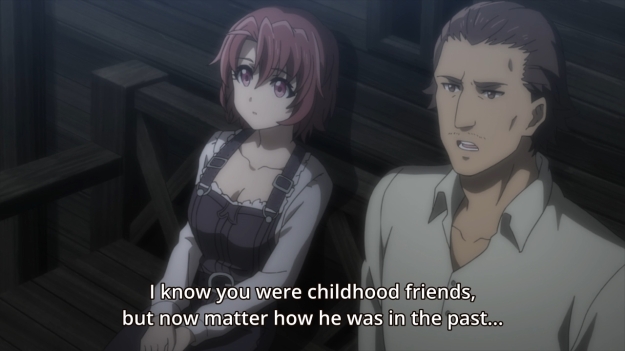 — Even Childhood Friend’s uncle tries to warn her that Goblin Slayer is too far gone. Just give up on the idea of him eventually settling down and living a normal life one day.

— Priestess gains a new spell, but instead of using it to protect others, she’s using it to trap goblins to their death. This seems like it bothers her a bit, but whatever. It’s like taking out bed bugs.

— The girl then falls to her knees and prays for the fallen adventurers who had tried to take on the same quest before them. Again, there are probably more productive things she could be doing. Like go on an inspired campaign to inform people about the dangers of goblins and these quests. I dunno, there has to be a better solution than just standing idly by and doing nothing. Oh no, newbies are throwing their lives away! I guess I’ll just pray!

— Look at that Guild Lady blush while talking to a suit of armor. We’re up to three haremettes now. Like goblins, they’re multiplying outta control.

— Near the end of the episode, Goblin Slayer finally makes his way back to his Childhood Friend. They proceed to have a scintillating conversation where he replies to every question with a one-word answer.

— After the ED, we see a bard singing about the Goblin Slayer of all people. He proceeds to pretty much summarize the rest of the story for us. Basically, every single hot babe in this world can yearn for our hero’s goblin-stained ass all they want, but he’ll never stop. He can’t stop. This goblin murderin’ train has no stops.

— Or to put it more disturbingly, he’ll never get over watching his sister get raped. All the hottest babes in the world can’t sooth Goblin Slayer’s tormented soul.

— Speaking of hot babes, this hooded person is probably going to be the fourth haremette to join the party. 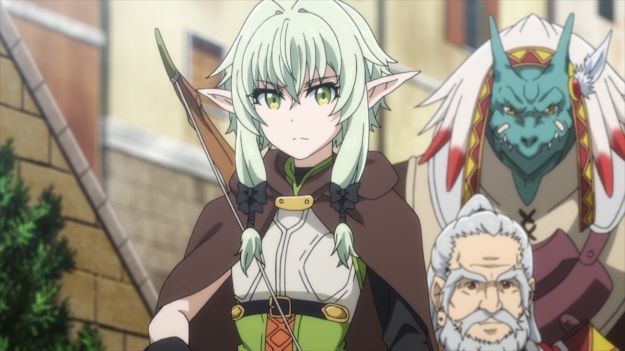 14 thoughts on “Goblin Slayer Ep. 2: Let’s make this show a harem too”