After two terrible shows, anything will feel refreshing by comparison. Even SSSS.Gridman! Still, I feel as though this anime is missing a lot of Trigger’s trademark exuberance. It’s just not as hype as I expected. The show’s atmosphere almost feels subdued at times in this week’s episode. Anyways…

— In the OP, we see two individuals holding hands. C’mon, Trigger, don’t tease me with potential romance. That scrunchie obviously belongs to Rikka, but I can’t see her getting with Yuta. He just seems so childish at the moment (his dumb hairdo doesn’t help). Oh well, maybe he’ll develop into a true hero by the end of the series.

— Anyways, not only is the school restored to normal, none of our trio’s classmates seem to have any clue that they were just attacked by a kaiju. Likewise, nobody recalls seeing Gridman save the day.

— But there are consequences to the bad guys’ actions. People can die and thus disappear entirely from this world. It’s almost like they never even existed in the first place. When Rikka asks about Tonkawa, her current friends — the ones that are left — have no clue whom she’s talking about.

— At the very least, there are high stakes involved, so I do appreciate the fact that the death count isn’t somehow magically zero. Not only does Yuta have to save the day, he has to try and save as many people as he can. Otherwise, they’re just gone. But of course, how long can this continue before the kid starts despairing over the fact that he can’t save everyone? That’s a common thing to happen in these types of stories, isn’t it?

— Honestly, I still can’t shake this feeling that some of the dead kids will somehow return to life by the end of the series, but we’ll see. I dunno, I guess I’m still skeptical that this show would have a dark side to it.

— Naturally, Yuta and Sho want to understand what has happened, but Rikka’s having a hard time interrupting her normal school life to accommodate the boys. On the one hand, I think she should be a little more concerned. Some of her friends literally just disappeared. On the other hand, I dunno… teenagers are teenagers. They tend to be self-absorbed. It probably hasn’t sunken in that people literally died in that attack.

— I do also appreciate the fact that the girl is playing the straight (wo)man. Yuta is an amnesiac, so he just goes with the flow. Sho seems like a mega-geek, so he’s super-excited to plunge into this scenario with gusto. As a result, the odd man out is Rikka. She is left being the normal kid. She’s doing her best to adapt to what is essentially an anime plot.

— So what’s up with Akane anyways? She’s the only other person at this school who actually knows about Gridman.

— Well, she decides to hangout with our hero at lunch. We also get to see several looming kaiju threats taking shape.

— Akane sounds like she’s pumping Yuta for info… what if she’s the bad guy? What if the cute anime chick is actually evil?

— I thought someone was bleeding, but it was just a dumb juice box.

— Oh wow, Akane is the bad guy. I guess I didn’t expect that. Now that we know which side she plays for, however, we’ll have to figure out why she wants to destroy the world so badly with her kaiju creations. 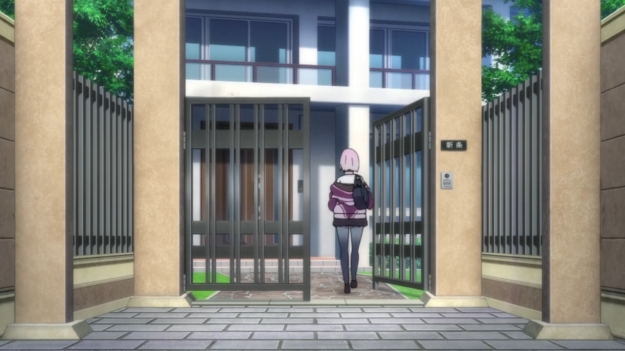 — Meanwhile, Akane returns home and goes up to her room full of trash and kaiju models. So is she just another typical anime teenager who lives in a giant home all by herself? Is she stereotypically lashing out at the world because she has no family? I hope that isn’t the case.

— Anyways, this is just further confirmation that she’s a villain. Also, we learn that her partner’s name is rather plain and boring: Gridman’s evil counterpart is simply known as Alexis. It’s like finding out that a demon lord’s name is just Bob.

— As our heroes try to wrap their minds around their current situation, this guy shows up right on cue to help guide them. He needs to see a chiropractor.

— The man introduces himself as Samurai Calibur, then proceeds to fiddle around with Gridman’s computer. And just like that, Gridman can now talk to all three kids. But we still don’t get an explanation. Rather, Sho announces his intention to investigate the whereabouts of the five missing kids. Considering how Rikka’s friends belong to that group, she should be more interested in this. Nevertheless, she acts as if this is all one big annoyance. I think she’s in denial. I think she doesn’t want to know what happened to them, because it would confirm the horrible truth that they’re truly gone for good.

— When the kids reach a restaurant that is run by Tonkawa’s family, they learn that she had died in an accident years ago. So their existence haven’t been eradicated entirely. Rather, their stories have been rewritten so that the world remains blissfully unaware of the kaiju threat. Still, are these fake memories? Or has the past been rewritten entirely? 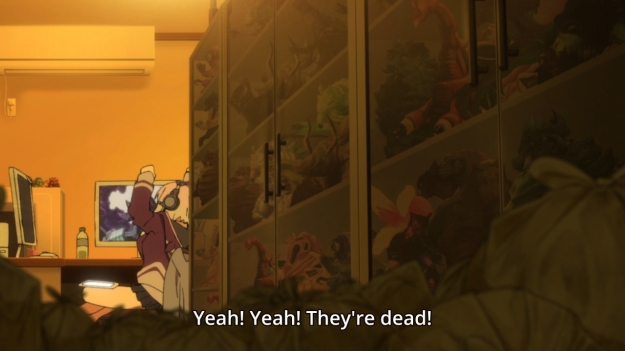 — Obviously, the same thing happened with the other four missing students. We then cut to Akane enthusiastically cheering over the fact that her classmates are now dead. Maybe she can’t be redeemed. Usually, when the villain is attractive, our hero might be able to bring them back into the light. But maybe Akane’s just too much of a psychopath. We next see her working on her latest creation, so Yuta will no doubt have to face a kaiju by the end of this week’s episode.

— After the trio’s investigation is all said and done, Rikka is despondent. I guess it’s just now sinking in for the girl that this is a big deal. Everything has happened so fast that she never truly grasped that some of her friends are now dead. Even worse, she gets to keep her memories, but her current friends don’t.

— Samurai Calibur can’t be human. He must be something that has been given human form.

— Still, he gets the chance to talk to Rikka alone, so the girl confesses to him that she now wants Yuta to protect her remaining friends. But when Samurai Caliber tells her to encourage the hero, she flat out says that she can’t. What’s stopping her? What’s the difficulty here? Is she afraid of placing such a heavy burden on Yuta’s shoulders or is something else bothering her?

— Rikka also acted kinda strange about Yuta’s amnesia in last week’s episode. I just hope that their backstory isn’t anything too generic.

— Well, no time to dwell on uncertain feelings, because our resident crazy girl just got done with her new toy. Basically, Akane comes up with the design for the kaiju, then Alexis turns it into a rampaging monster.

— She also has a new target for her kaiju to go after. Akane’s mad at her homeroom teacher just because the guy carelessly bumped into her at lunch time. What a nutjob.

— Oh hey, look at Yuta’s missing shoulders. Just Trigger things, I guess. Don’t get me wrong, though. I like their animation style. It’s just that their patented quality can show up from time to time.

— Dude, if I see a giant monster destroying my city, I wouldn’t stop to take a picture.

— Yuta immediately jumps into action, and it doesn’t take long to convince Sho to fall in line and support his best bud. But for some reason, Rikka hesitates. She does eventually become just as determined as the rest of the boys, but it takes a near-death experience to push her forward.

— So Yuta joins up with Gridman once more, and together, they manage to save his teacher in the nick of time.

— As a result, Samurai Calibur magically becomes Gridman’s brand new sword. I guess he was always a sword to begin with. I also expect these currently unintroduced characters in the OP to eventually become a part of our hero’s arsenal.

— With his new sword, our hero fells Akane’s new beast in just one move. For a show all about Gridman and potentially pushing related merchandise, this show doesn’t focus too much on the action, huh? The battles in the first two episodes have been relatively short.

— In the aftermath, Rikka quickly checks up on her friends and discovers that they’re okay. She quickly runs off to see them, but she does thank Yuta before leaving.

— Still, Yuta is distraught over the fact that some people did die today (even though we didn’t see any casualties onscreen). He couldn’t save them all. Naturally, he is encouraged by both Gridman and Samurai Calibur to do his best.

— So when he returns to school, he sees that his homeroom teacher is still alive. That’s a silver lining, I suppose? But as one might expect, Akane is displeased.

— In typical Trigger fashion, the ED is all about the girls, i.e. Rikka and Akane. Well, I think that they’ll have to carry this show. At the moment, Yuta is relatively straightforward and he might stay that way. He’s an amnesiac, so he’s already a blank slate right from the get-go. More importantly, it seems like Yuta has to embody the pure-hearted hero. If he hesitates, it’s only because he’s all worked up about his inability to save more lives. Maybe I’m not giving the guy enough credit, but I don’t expect Yuta to become a very complex protagonist.

— On the other hand, Rikka’s reluctance to embrace her role in all of this makes her slightly more interesting as a character than her male counterparts. Likewise, I hope that Akane isn’t just another spoiled brat. I hope she has a compelling reason for what she’s doing… but that might be asking too much of what looks to be a relatively straightforward action anime.

1 thought on “SSSS.GRIDMAN Ep. 2: Just some straightforward heroism as a palate cleanser”