The Dutch angle here lets you know that something important is about to happen!

— The episode opens with a quick briefing of how the war is going. The only thing that really pops out to me is the Duke of Burgundy defecting to the English. Welp, that pits one of Montmorency’s haremettes against him. Which one? The one named Philip. Yes, that’s right. Her name is Philip. What of it? Dude’s got a harem consisting of Philip and Arthur. Don’t you?

— Finally, we’re introduced to the heroine of the show, and of course she’s naked. Why wouldn’t she be? Man, she looks malnourished. Not much cake going around France during this time period, huh?

— Uh, is that how they are going to pronounce her name for the rest of the series? Jhan-nuh?

— Hm, the OP is just the ED from last week. I guess we’ll have a new ED then.

— So um… where does Ulysses come into this?

— For some reason, she and the fairies are praying while burning fruit at the site of some ruins. What a waste of perfectly good food.

— Anyways, Montmorency suddenly shows up to the same ruins, because the place might just have the magical power he needs in order to transmute his elixir. Yup, he’s still going at it. God only knows what has happened to his dear friends in the past few years.

— Unfortunately, Jeanne is not the badass warrior that I was expecting. I mean, maybe she becomes one, but right now, she’s just another ditzy anime heroine. Worst of all, she’s obsessed with her lack of breasts. Future gags will write themselves. I bet you she’ll get mad jealous if and when they rescue Arthur.

— Montmorency ends up screwing up again, so he gets knocked out while protecting Jeanne. When he finally regains consciousness, he finds himself in Jeanne’s home. Despite her build, she must be pretty strong if she could lug the guy back to her place.

— Apparently, the guy has been chosen by the queen of fairies to become the next Ulysses. More importantly, this title belongs to the man who can bring an end to all wars. Yes, all wars. Even the ones on the other side of the globe. And once that’s done, he’ll turn Earth into a utopia. Uh, what? So yeah, I still understanding nothing. Since when has Ulysses ever been this important? Hell, Ulysses is neither French nor English.

— If Astaroth picked this guy for such an important job, then she must see something in him despite all his screw-ups. Otherwise, she would’ve just cut her losses and found someone else. But who knows? Maybe she’s an idiot too.

— Here comes the bad guys? Kinda. Introducing herself as La Hire, the woman claims that she can protect the villagers from the Burgundian army, but in exchange, she wants all their foodstuffs. 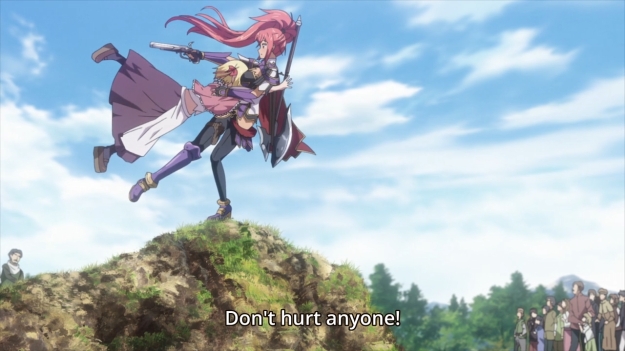 — Jeanne complains to La Hire that the villagers won’t make it through the winter if the latter takes all their food. So why was she burning food just earlier?

— In the middle of this discussion, good ol’ Montmorency starts drooling out of nowhere like a rabid dog. According to Astaroth, he’s now become a vessel for the same elixir that he has been desperately trying to craft. My, my, how the tables have turned…

— So can he finally swallow that stupid philosopher’s stone? Not necessarily, Astaroth warns. Since he’ll keep producing the elixir, she doesn’t really know how the stone will react to so much reagent. Unfortunately, any further discussion is immediately tabled, because the real bad guys are here to wreck the village.

— Well, we know where this is going. We’ve already seen Montmorency making out with Jeanne in the OP. That’s just him slipping her the elixir on the sly. Essentially, she’ll become the next Ulysses. La Hire was his first suggestion, but Astaroth quickly shot that down. She doesn’t want to pick Jeanne either, but well, she doesn’t really have a choice in the matter.

— A bunch of silly fairies were going to escape from the village, but they suddenly stop dead in their tracks because they think they can stop armed soldiers like 20 times bigger than them. 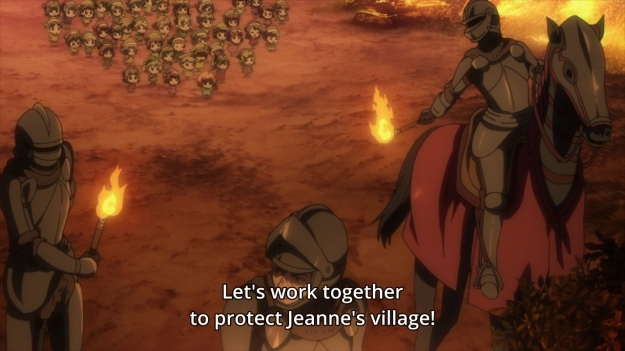 — The guy on the right is drawn rather oddly, though. Hell, they all are.

— Unfortunately, the tragedy of the fairies is just an excuse to remove Jeanne from her current safe spot. After all, she needs to put herself in danger and thus face death. This will then force our hero to save her with his nasty saliva.

— Oh man, that sucks: the soldiers killed the fairies. As dumb as they were, I didn’t really want to see them get murdered. Jeanne then quickly joins them by getting stabbed in the back. Alright, here we go. This is the moment we’ve been waiting for. She’ll become a heretic, but Montmorency promises to be by her side until she… uh, dies again.

— He’s only going to give her half of the stone, though. It remains to be seen what will happen to the other half. The Lady Astaroth doth protest, but it’s clear that our hero isn’t going to let his main haremette die.

— Yeah, sure, I definitely needed to see the elixir swirl down her throat. Otherwise, how would I know that she’s drinking it?

— It always hurts the first time, but it’s not supposed to hurt this much.

— Elsewhere, La Hire is surrounded. Luckily, ditzy Jeanne has now been reborn as sassy, badass Jeanne with shounen powers! Hell, even her voice has changed. She no longer sounds like a little child. This philosopher’s stone is dope.

— Our bloodthirsty Jeanne proceeds to defeat the entire enemy army all by her lonesome. Hell, she would’ve murdered them all, but of course, Montmorency holds her back.

— Unfortunately, our heroine is still itching to fight, so she challenges La Hire to a duel. Why? All because La Hire has big breasts. Yeesh.

— Luckily for La Hire, Jeanne passes out right before she could land the killing blow. Even still, the woman would’ve gladly died to a cute girl. They’re all idiots.

— Astaroth then conveniently informs us that Jeanne can only become a badass hero for three minutes. Exactly three minutes? Well, isn’t that neat and tidy? So can she activate her powers on command or what? And how long does she get knocked out once those three minutes are up? I guess we’ll have to wait and find out.

— The next morning, Jeanne is back to her normal self. That means she gets her crappy old voice back. I mean, yeah, I don’t like murderous Jeanne, but whiny baby Jeanne is also pretty bad. On the plus side, I guess this is like getting two haremettes in one. That’s efficient hareming, my friends!

— Our heroine also has to depart from the village, because, y’know, she’ll become a heretic and all that. But off to the side, Montmorency swears that she’ll become a saint one day. Sure, I guess.

— The ED is too sleepy for my tastes.

— And to cap this episode off, the trashy preview for next week’s episode talks about the girls and what shape of boobs they have. Great!