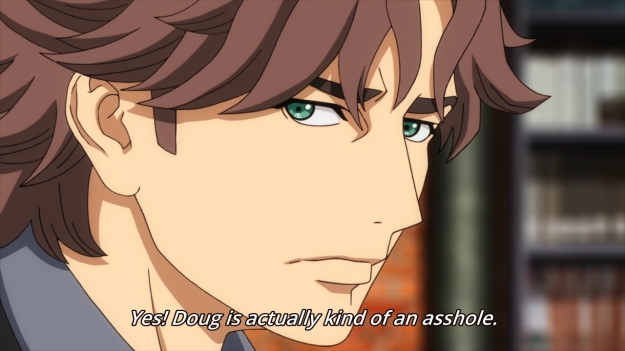 — The episode kicks off by correcting about Derick: he’s not dead at all! He simply switched professions to being a bartender! Well, I can’t blame Kirill for making this mistake. I thought the same thing, too.

— With that out of the way, the narrator quickly announces that this week’s episode will focus primarily on Pink and Kay. Mostly Pink, actually. She’s known for doing things her own way, i.e. she doesn’t really care about the rules and regulations of the job.

— The duo is assigned to a case involving a suspect at a host club, so Pink gets all dressed up to go undercover. That’s quite an outfit. What’s funny is that none of the other women look anywhere near as flamboyant as she does, but she’s probably just having fun.

— Things get pretty wild in these clubs. All that champagne is going to waste, though. Well, now that I think about it, some crazy lady would probably pay to drink the whole thing with the guy still in it.

— It’s also funny to watch Pink shower hundred dollar bills on the guy. I don’t think there are any host clubs in the US, but I could be wrong. We have plenty of strip clubs, though. Way too many.

— Anyways, Pink and Kay eventually identify their suspect, but the former whips out her gun before confirming that the guy even has Anthem on him. Kay likes to play things by the books, which results in an argument between her and her partner. This minor distraction thus allows the suspect to get away, and of course, more argument ensues between the two women. 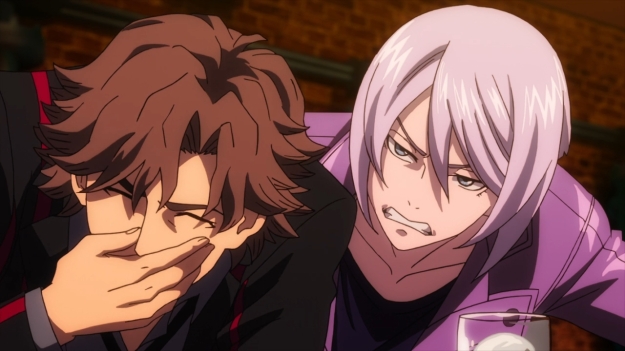 — On a side note, Doug continues to tease Kirill, but it’s never malicious. The latter actually thought that he was going to give a speech at his “welcoming party.” The rookie only has himself to blame for being so thick-headed.

— When it comes to drinks, Kay is one of those girls.

— She also opens up about how Pink has questionable tactics as a detective. But hey, it’s a rough job. Whatever gets the job done, right? I mean, I suppose if you get too rough with the bad guys, they might try to sue you in court. Since this is just fantasy, however, Pink doesn’t have to worry about flouting the rules.

— To help smooth things over, the other guys let Kay in on a little secret: if you’re a vet like Pink, you can request to go solo. In fact, that’s what she’s been doing for quite some time now, but for some odd reason, she agreed to take Kay under her wing. This immediately changes the rookie’s impression of her partner. That was easy.

— Elsewhere, we see Pink pay Derick’s new bar a visit. Unfortunately, she appears to be his only customer. Y’know, bars are kinda like therapy for adults in anime. No one has time to go to true professional. Just visit a local bar and monopolize your bartender’s attention instead!

— The next day, Kay reaches out to the Drug Control Division for help on the case. After all, she plays by the books, and until Anthem rears its ugly head, this case technically belongs to the other team.

— But more importantly, this is where the episode’s pacing kinda goes haywire for me. Some shows are taking way, way too long to get going. Well, this week’s episode of Double Decker! moves a bit too fast for my taste. 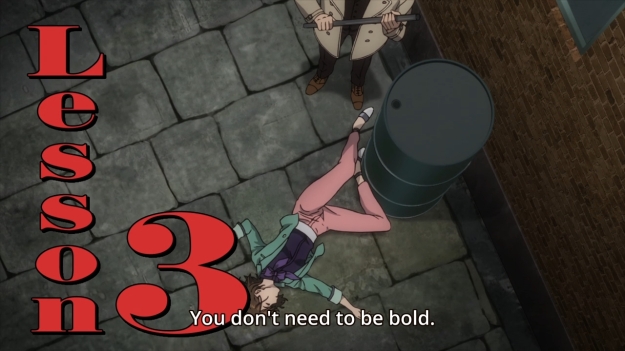 — We soon see Kay go undercover with Gary from the Drug Control Division. They hit up that host club once more. The guy, however, quickly reveals himself to be one of the bad guys. There’s no build-up or anything.

— Gary proceeds to do the typical villain thing and explain everything about his crimes to a tied-up Kay. His henchmen then show up with Yuri and Kirill in tow. According to the latter, they were worried about Kay, so they decided to follow her. This all happened offscreen, too. I wish we could’ve seen it ourselves instead.

— Finally, Gary wants to get his hands on one of those Anti-AMS bullets, so he forces Kay to get Pink to bring one. Do it or Yuri and Kirill will die.

— As soon as Pink hands the bullet over, however, the guy whips out a machine gun and goes to town on Pink’s car. The vehicle goes up in flames, but our heroine managed to hide herself in a nearby manhole. Either it just happened to be uncovered, or she somehow removed the cover in no time flat. Who knows!

— Now cornered by both Pink and Kay, Gary decides to use Anthem out of desperation. But in the end, Pink and her lips-licking powers prevail. Kay realizes that she (obviously) still has a lot to learn. She won’t compromise her affinity for rules and regulations, but she has a newfound respect for Pink.

— Yuri also reveals that she was never really taken hostage. She literally activates, which signals Max to show up and save her and Kirill. 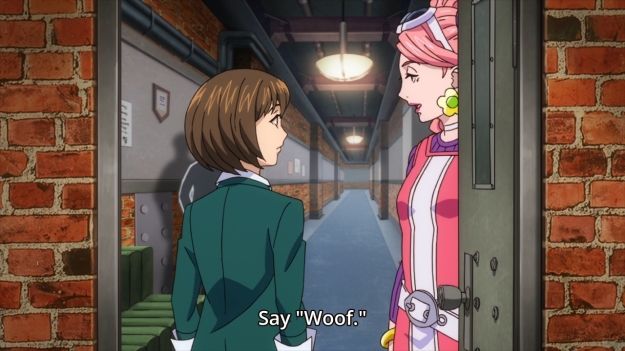 — In the end, Max claims that Pink once had a dog named Kay, and this is probably why she agreed to have a partner. I think they’re just hazing the rookie, though. Likewise, Doug continues to mess with Kirill whenever the opportunity arises, and boy does it arise often.

— As always, Double Decker! is full of energy, and the character interactions are fun to watch. So far, there isn’t anyone that I dislike on this show. The pacing just feels rushed, though. It feels like this is going to be a one-cour anime series, so we got one episode for this story instead of two. Don’t you think two episodes would’ve made more sense? We could’ve spent more time with Pink and Kay, especially the former. We got glimpses at her past, and this could’ve used a little more clarity.

— Likewise, we could’ve built up to Gary’s betrayal as well. Pink’s prior history with the guy could have used more attention as well. He kinda just unmasked himself as the villain outta nowhere. Again, everything just felt rushed.

— The preview for next week’s episode also assures us that we’ve finally gotten to know the cast, so it’s time for the main story to begin. Hm, I don’t think I know Yuri and Max all that well yet, but whatever they say…