— It’s a good thing Rimuru ate all those healing herbs in the cave. Now he gets the ability to completely envelope sick people in order to heal them. Kinda scary from the injured person’s perspective, though. It’s funny how he didn’t warn the elder ahead of time. Like, “Look, this is what I’m going to do in order to heal them. Don’t. Freak. Out.”

— Plus, he spits them out once he’s done. There’s probably a gentler way to do this.

— Rimuru then tells the goblins that they’re going to build a wall to keep the direwolves out! Slime boy is already smarter than all of the humans in Goblin Slayer combined. It’s not the best fence, but it’s better than nothing. At least they’re trying.

— Oh no, these are not good bois. These are somewhat smart dogs, too. What I mean is that the direwolves aren’t just hunting for food. They actually intend to destroy the goblin village in order to assert their dominance over the forest. Bad dogs!

— Thanks to Rimuru, both steel and sticky threads trip up the direwolves. Good thing our hero ate a spider in the cave, I guess. There’s also the fact that the dumb mutts are directly charging at a fortified position. Maybe they’re not so bright after all.

— Our hero also doesn’t hesitate. As soon as the leader of the pack is ensnared, he immediately cuts the direwolf’s head off. Slime boy seemed so nice, so I thought he would try to reason with the leader. But I guess this is the more efficient option. We’re cutting right to the chase.

— This still doesn’t manage to scare the rest of the direwolves off, so Rimuru eats the leader of the pack’s corpse and mimics it. I was kinda hoping for him to still look somewhat slime-like, y’know? But appearance-wise, it’s a near-perfect copy.

— Rimuru keeps hoping that the direwolves will run away, but it’s obvious what will happen next: they will  submit because he’s now the leader of the pack.

— And that’s exactly what happens. Yay, the domestication of direwolves…

— Right now, this is more like a simulation game than an RPG. Hell, he even has to teach the goblin society that names are useful!

— More importantly, this is all kinda boring, because so many of these shows bog themselves down with the mechanics of the “game.” Like c’mon, if I wanted that, I’d just plug in my console and start playing a JRPG. I’m here for a good story, and watching a slime name a bunch of goblins one-by-one is not exactly my definition of exciting. We’re three episodes in, and I’m still waiting for the show to introduce interesting characters as well as a compelling conflict. Unfortunately, we’re still in the world-building stage.

— The goblins and wolves go nuts with happiness when Rimuru tells them that he’s going to name each and every single one of them. Geez, imagine what will happen if you give them a sock.

— After naming a single direwolf, Rimuru is suddenly unable to hold his shape. It turns out he has depleted his “magicules,” so he will now have to sleep for three straight days. Basically, naming monsters actually takes up MP. Okay then. I guess this is why the goblins couldn’t just name themselves. This universe has some rather eccentric gameplay quirks. 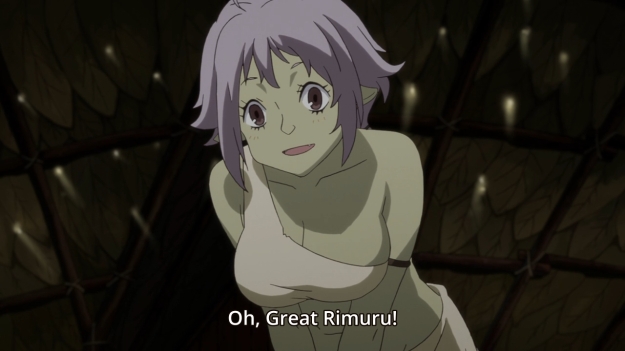 — When Rimuru finally recovers, he’s greeted by a goblin with a large rack. Great.

— The goblin guys have become eye candy, too. In fact, we’re staring at the elder. By naming the goblins, Rimuru have turned them all into fit, hot models! Technically, they’ve evolved into hobgoblins and “goblinas,” but whatever. Unfortunately, it seems as though this has only made them stronger and more physically attractive. Rimuru still has to worry about providing them with adequate food, clothing, and shelter, so the goblins’ collective intelligence hasn’t gone up very much.

— Too bad the one doggie he named didn’t become anything cool. It just gets a dumb horn instead. But like the former goblins, they are no longer direwolves. They have become “tempest wolves.” Uh, awesome.

— Rimuru lays down some basic ground rules. Maybe the humans in the other show should try the same tactic! Just ask them to be nice! Like… could you not rape our women? Actually, could you not rape at all? Yeah, that’d be really swell.

— It also sounds like he has to teach them basic empathy. One of the goblins wonders why they shouldn’t attack humans. Like dude, just three days ago, you were begging for help because direwolves were about to wipe your village out. Try putting yourself in your own shoes. They’re not that old.

— Anyways, the goblins don’t exactly have sewing or house-building skills. As a result, our hero have decided to go and pay the dwarves a visit. That about wraps it up for this week’s episode.

— Yo, I’m going to be annoyed if this turns into yet another boring society-building isekai. I’ve seen enough of those in my time. On the plus side, That Time I Got Reincarnated as a Slime isn’t mind-numbingly stupid. It’s just… kinda boring.

— Let’s put it this way: as much as I didn’t care about lizards and lizard mating rituals, I also don’t care about goblins and their related problems.