Nana joins Seriousuka as the first of her friend group to become an Equalizer, so she gets battle armor that kinda resembles a wedding dress. That’s kinda cool, I guess. I imagine we’ll go through the same thing with each of the girls, so I wonder what each of their individual gimmicks will be. The problem with this episode is that Nana is kinda hard to take seriously, so I am a bit surprised to see her get her superpowers before her friends. First, she didn’t want to get married, which was understandable. After all, she’s only 17. But then she changed her mind when she realized that her fiance was hot. But wait, now she doesn’t want to get married because she would have to change her name to Chiyokoba Nana, i.e. choco-banana. Yeah, she’s kinda shallow.

There are also some story elements that don’t quite make perfect sense to me. Asuka is looking for the King of the Twilight, because defeating him might save her dimension from falling apart completely. Alright, sure, that part is straightforward enough. Well, Nana’s fiance ends up being a Clutter, which is one of the King’s minions. And as a clutter, he’s here to… do what exactly? By marrying Nana, he’ll somehow destabilize the world even further? And this will allow the Noizes (i.e. the snow bunnies) to infiltrate and thus destroy the world… but, uh, to what end? I imagine this will all get revealed to us eventually, but I hope it’s sooner rather than later. I just hope it isn’t something lame like the King of Twilight just being another nihilistic dork.

I also like how the group bumped into 696.9’s Asuka, left her at the cafe, and she still managed to get to the church before them. Someone’s got magic teleporting powers.

In any case, I’m still following the show for now, because it hasn’t gotten super boring yet. I actually somewhat like the cast. Asuka is stupid, but in an endearing sort of way. Even 696.9’s Asuka is dense as hell. 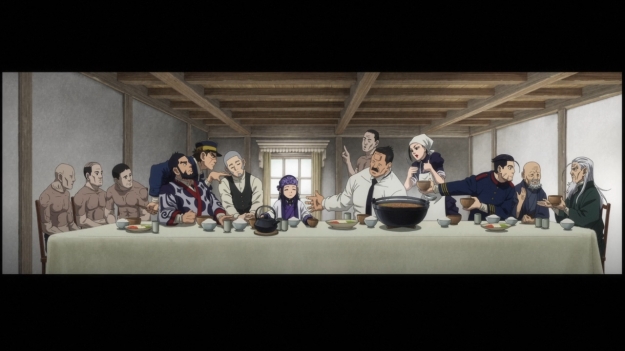 Yep, that’s The Last Supper featuring four skinned corpses. This show just gets quirkier and quirkier. Well, the creepy taxidermist is dead, but he still managed to get five fake skins out to Tsurumi before breathing his last breath. Meanwhile, Sugimoto and Hijikata nearly come to blows, but luckily, someone’s (Asirpa’s?) rumbling stomach temporarily saves the day. Honestly, I don’t really have much else to say. I wouldn’t necessarily say that major plot stuff happened in this week’s episode. More like hijinks happened. Hijinks involving a high-speed chase in a mine cart and a massive explosion that nearly takes both Sugimoto and Shiraishi out. They should thank their lucky stars that Chinpo-sensei was there to rescue them. In the end, we killed some time, but I feel no closer to any sort of resolution.

So far, this is not bad. It’s not bad at all. I have one major quibble, though: it’s senseless for the Taibai Empire to be this evil simply due to their lust of conquest. At one point, Yin has the bad guy cornered, so she demands to know why the Empire is just murdering everyone and everything in its path. Women, children, babies, it doesn’t even matter! Everyone dies! Religious zealotry? Ethnic cleansing? Nope! The guy simply tells her that might makes right. The guy simply explains that if you don’t win, you’ll lose everything. But what will you have left to rule if you kill everyone? Even the Mongols would spare cities that submitted to them voluntarily. I dunno, I just have a hard time wrapping my mind around an Empire smashing defenseless villages for no other reason than to conquer the world. You subjugate these villages, idiots. You don’t murder live bodies that can at least pay taxes. Oh well.

So what happened this week? Imouto got working prosthetic arms! According to Yun, they can move thanks to magnetism. Sure. The best part is that the girl’s new arms also come equipped with blades, so now Imouto can help Yin in battle! Unfortunately, the Empire immediately sent reinforcements to destroy the very same village that Yin had saved in the first episode. Well, y’know what they say: when at first you don’t succeed, try, try again! And boy, did they succeed the second time! Some poor kid got her head chopped off for no reason other than the fact that (again) might makes right! Even though Yin seems reluctant to kill the bad guy, poor Imouto is so traumatized that she ends up finishing the job for her big sister. Yeesh. So a subplot to track from here on out is Ning’s loss of innocence.

Elsewhere, Mo Heng has defected to the rebels. He explains that as soon as he saw what the Empire was using his creations for, he could no longer remain on their side. I mean, okay, sure, but what did you think the Empire was gonna do with those Constructs? Look at them. Do these look like happy-fun-time machines to you? Anyways, to help the rebels, Mo Heng’ll gladly offer up his the blueprints to his finest Construct so there’s that. Unfortunately, he also showed Zhao the same plans in the first episode, and the kid seems to have a photographic memory.

Speaking of Zhao, even though his own village was destroyed by the Empire, he now willingly serves his empress without any qualms. Dude, the Empire enslaved you and nearly murdered Ning. They tore you away from everyone that you loved. Are you serious right now, my guy? Actually, you really wanna know what Zhao’s deal is? The empress desperately wants to be his imouto, and of course, what red-blooded anime dude can resist that? I mean, this is what I’ve been trying to say for years on this blog! Imoutos represent the death of morality! Ironically, I hope the two sisters eventually kick his ass.