It’s the middle of the week, so you know what that means: time to cover a bunch of shows that nobody really cares about.

— I jest, but not really. My views are 90% Goblin Slayer, SSSS.Gridman, That Time I Got Reincarnated as a Slime, and that Jeanne D’Arc show. 9% then goes to that bastardization of Shakespeare’s play. The rest get to divvy up the last 1%.

— So what selfish stunt is Haiji going to pull this week? Well, it looks like he’s managed to drag everyone (even Kakeru!) out of their warm, cozy beds despite it being the wee hours of the morning. I have no idea why a house full of grown men can’t stand up for themselves. Okay, Prince Otaku needs a place to stay, but nobody else really has an excuse.

— “Just for today,” Kakeru says. Just the tip! Well, that’s how they getcha!

— Actually, I like to eat hours before a run. After a run, I’ll just grab a banana or something. I never eat a big meal afterwards. Then again, I also prefer to jog at night.

— So Haiji wants them to do a 10-kilometer jog right off the bat. That, uh, sounds like a quick way to hurt yourself. If you haven’t jogged in a long time, you’ll probably need a couple days of rest after, say, a single kilometer. Doing ten kilometers is stupid. Also, if you haven’t eaten anything, where are you going to get the energy to do this? They just woke up. Did they even stretch? Did they even have a drink of water?

— Nevertheless, Kakeru takes off running, so even though he never wanted to join this team in the first place, he’s already inadvertently leading by example.

— There’s no way a bunch of untrained guys jogged five kilometers straight. No chance. The twins have experience playing soccer, so they’re probably fine. But the rest? Nuh-uh.

— I dunno who’s dumber: Haiji or the guys who refuse to put up any resistance to him.

— Well, it turns out Kakeru played along in order to prove to Haiji that his ideas are dumb. But again, the other guys might see how easily he can do it and thus get a second wind or something. His words are falling on deaf ears anyway; nobody’s going to convince Haiji otherwise.

— That reminds me: I gotta go jogging tonight.

— 5K is about 14 minutes? Yeah, for trained athletes. I get that’s what he’s trying to say, but… these are not trained athletes, and I don’t think 10 months would realistically change that. Good thing this is anime where anything goes.

— The smoker gets his cigarette confiscated, which he obviously should’ve expected. Runners aren’t supposed to smoke.

— Kakeru defiantly turns down free breakfast, because he doesn’t want to owe anyone any favors. And yet, he continues to live here…

— We soon see Haiji try to drag the same bunch out of bed again, but this time, he doesn’t get perfect attendance. Y’know, I really hope he isn’t making them run on consecutive days, because you really shouldn’t when you’re just starting out. You really, really shouldn’t. Sure, once you get used to running, knock yourself out. But as a newbie, you need to allow your muscles to heal between strenuous exercises, running or otherwise. 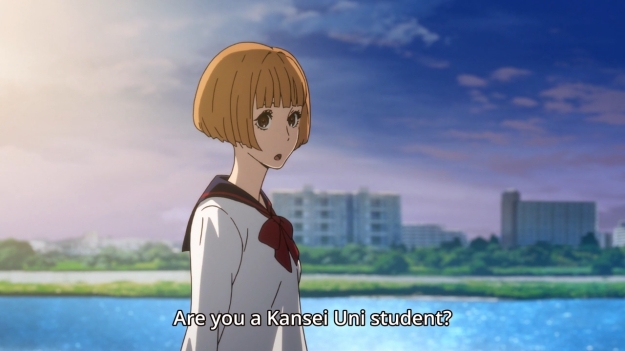 — And yet, Kakeru is a willing participant again. Hell, he starts running before the whole group is even assembled. In doing so, he bumps into the token girl of the entire story. On the one hand, the early bird gets the worm. On the other hand, she’s still wearing her high school uniform, so this doesn’t sound like a good idea, my guy.

— The girl quickly inquires about Haiji while some odd track plays in the background. When the rest of the guys arrive — minus the aspiring lawyer — we learn that she’s just some vegetable vendor’s daughter. For now, anyway.

— We then cut to the aspiring lawyer (I’ll memorize his name one day… maybe) attempting to pick up a couple of girls at a club, but Haiji shows up out of nowhere to spoil the fun. I guess I’m not surprised that the aspiring lawyer would be the only one to put up any sort of fight. He’s still going to fall in line eventually, though.

— Haiji then promises to accompany the aspiring lawyer to the clubs every night, ’cause y’know, teammates. So on day three — again, I can only hope that these days aren’t consecutive but I’m more than likely wrong — we see the latter willingly get up early for a morning jog. Dumb.

— He also stares slack-jawed when the Hanako, the token girl, shows up to their home. C’mon, she’s a high schooler!

— Sadly, all of the guys seem to be in good spirits now that they have a girl cheering them on. Sigh…

— Speaking of Hanako, she’s brimming with energy and is willing to help the guys out before and after school. But, uh… why?

— The guys still want to know if Haiji and Hanako are dating. What’s it to them? Well, I know why they care, but still…

— Right after Hanako leaves for school, Haiji starts going on and on about how he was right: girls will approach you if you run! Yeah, great, lemme start scoring high schoolers. That sure will make a big man.

— But of course, the twins are now convinced. What a pair of goobers.

— Then another guy agrees to keep going just because he is enjoying the positive vibes. Haha, it’s that easy. First, you selfishly insist that nine guys join you on some mad quest to run a 100-plus kilometer marathon. Then after three whole days, Stockholm Syndrome will set in!

— At this point, Kakeru is just being a classic tsundere. He still thinks that this is a bad idea, because Prince Otaku can barely survive the morning jogs. But look, actions speak louder than words, and nobody has been a more model student than Kakeru.

— Some guy runs by and recognizes Kakeru. A former teammate, perhaps.

— In the afternoon, Haiji tells Hanako that his hypothesis has been confirmed: athletes do better in front of an audience. But just look at the girl’s response. Man, it’ll be lame if the token girl is also just a one-dimensional Genki Girl.

— Apparently, she’s been singing Kakeru’s praises. It’ll be even funnier if she’s the sole reason that our protagonist buys in. I doubt it, though. This doesn’t really feel like a show that has the time nor the energy for romance. Gotta go fast!

— Elsewhere, the rest of the guys discuss how they need to get past the qualifier before they can even participate in the real deal. The gang will have to beat out about 50 other schools for the privilege to compete in the actual race. Well, not only will they get through the qualifier, I bet you they’ll get through by the skin of their teeth. It would be such a typical underdog thing to happen. At the end of the day, Run with the Wind appears to share the same DNA with other sports anime.

— Kakeru thinks he’s discouraging the other guys by being a realist, but at best, he’s just tempering their expectations. He’s just going to spur them to work harder. Most importantly, he’s not going to change anyone’s minds. They look like they’ve already drunk Haiji’s Kool-Aid.

— When the twins tell him to just go with the flow and run with them, Kakeru replies that he doesn’t work well with others. I mean, it’s just running. There’s some teamwork, but it’s not like basketball or anything. Let’s not get it twisted.

— On the fourth day, Kakeru has already gone ahead and started running without the group. This thus allows him to bump into someone from his past, i.e. the same guy from the previous day. Judging by Kakeru’s reaction, they don’t appear to be on good terms. But that’s for next week’s episode.

1 thought on “Run with the Wind Ep. 3: Need motivation? How ’bout a high school girl?”