This anime adaptation of Deer Hunter is wild.

— Right off the bat, Romio wants to celebrate his one month anniversary with Juliet. It’s silly, but they’re in high school and it’s his first relationship. Call it puppy love or whatever. I just don’t think you need to make it an event. You could just give her something special on that day.

— On the other hand, I think Juliet’s response is rather cold. She’s a whole lot less sentimental than her boyfriend, that’s for sure. But after seeing Romio cry, she eventually relents and blushes like a typical anime love interest.

— In any case, Char is supposedly a big deal, because she’s the tyrant princess of the west or whatever. Yeah, that’s not worth capitalizing. Plus, it’s hard to take her seriously with the nekomimi thing on her head.

— Only in anime do I ever see kids make such a big deal over one of their classmates. I feel sorry for the janitor who has to clean up all the confetti. But back to my original point, Char walks up to Scott and demands that he tells her a joke. If she’s not satisfied, she’ll hit him. Guess what? She hits him anyway. Isn’t this sort of behavior kinda disgusting? You may think that’s the point, but this sort of trope crops up in anime all the time. Someone out there likes it.

— C’mon, stand up for yourself!

— So of course, the Black Doggies refuse to show Char any respect, but what Romio doesn’t realize is that she knows all about him and Juliet. I thus expect to watch an entire episode of him groveling at her feet. It’s bad enough that he’s kind of a doofus. After all, he literally charges at Char with a closed fist; he’s dumb and violent. I know it’s comedy and all, but that’s assault, dude. It’s not even self-defense. 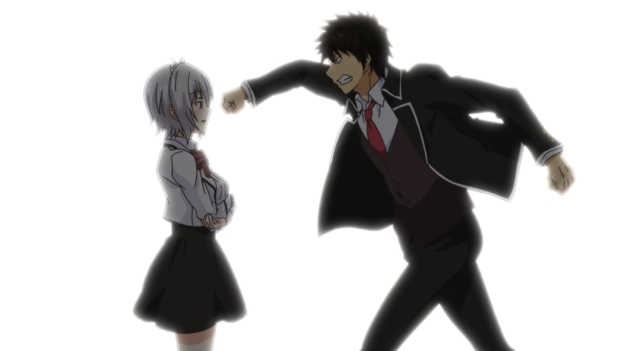 — But right before his fist meets her face, she mentions their secret (which nobody else manages to hear). He’ll now have to obey her every whim for the rest of the episode. Like rubbing her shoulders! See, this could all be avoided if he and Juliet weren’t so scared about going public with their relationship.

— Man, where’s your self-respect, dude? Do you think Juliet would wanna see you like this? But in all seriousness, this is why these romance stories are so stale. The guy will humiliate himself up until both he and the audience needs to feel sorry for Char. Something about her past will haunt her, and he’ll end up having to help her out. In doing so, she’ll begrudgingly respect Romio and thus approve of his relationship with Juliet. It’s so predictable that it hurts. All we can do for now is watch as he makes one dumb mistake after the other.

— Slowly but surely, Romio is losing his faction’s respect, but he’s okay with that. In his mind, he’s protecting Juliet, ’cause everyone seems to believe that if she’s caught dating him, then her popularity will plummet. And if her popularity plummets, she won’t be able to change the world. That’s kinda defeatist, but whatever.

— Plus, if he tells her the truth, then she can’t misunderstand him! And we all know these cliched love stories always fall back on misunderstandings to drive their conflicts! 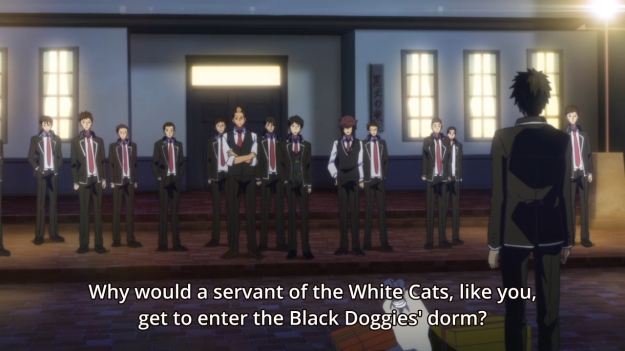 — Romio quickly learns that his standing with the Black Doggies have plummeted so hard that they’re kicking him out of the dorms. Womp womp.

— Also, Char’s one of those boringly perfect characters. She’s super smart and super athletic. Almost everyone likes her, too.

— Oddly enough, Char tells Romio to avoid running into Juliet. The next day, he finds out from his girlfriend that she and the haughty princess used to be childhood friends. Char’s one weakness is, well, Juliet.

— Sure enough, Romio finds the girl’s secret shrine to Juliet. What a stalker. Only in anime, folks. I mean, at least she’s not in love with the main character, I suppose?

— Blah blah blah, she’s jealous of Romio stealing Juliet away. Yawn. Let’s get to the end of the episode already.

— Right on cue, Juliet would like to talk to Char. Unfortunately, if she comes into their shared room now, Char’s secret love will be revealed. So like I predicted, Romio will help Char out of this predicament, and as a result, she will owe him. But… is this something that you want to keep hidden from your girlfriend? Wouldn’t you want your girlfriend to know that her childhood friend creepily stalks her? Or is this just another case of them both being girls, so it’s, like, totally harmless, you guys.

— Juliet eventually tells Char that they’ll always be best friends, so that’s that. That’s enough to reassure Char that she doesn’t need to feel so threatened by Romio. After Juliet leaves the room, Char tells Romio that she’ll never approve of the relationship, but she doesn’t stop him from meeting up with his girlfriend for their anniversary plans.

— Anyways, the episode ends with Romio discovering that Juliet had fixed the broken rosary from last week. It doesn’t seem as though she’ll ever really find out what was going on between him and Char. Kind of a weak resolution if you ask me.