Just call them. It’s that easy.

— Before we get started, I had heard about the show having tons of references to Transformers. Too bad I wouldn’t really know anything about that.

— On a somewhat related note, I’ve never actually watched mecha shows because I like mechas. I don’t really care for them at all. They seem impractical. So why do I watch these shows then? Hmm, that’ll probably require more thought and reflection than I have time for in this post.

— The episode opens with Akane making a new friend, and the kid appears to have a major beef with a certain somebody. I’m betting Gridman, but we’ll see. I mean, it can’t be Yuta, ’cause I doubt they’ve ever met. Also, the kid’s name is simply Anti.

— Oh yeah, I just recently realized that Akane had killed Rikka’s friend simply because her “special dog” was  smushed by a volleyball in the first episode. I didn’t think anything of it at the time, because I didn’t know back then that Akane was so evil and deranged.

— Samurai Calibur stands at the school gates as if he’s a pet dog waiting patiently for Yuta. Can the adults not see him? Or are they just not bothered that a suspicious-looking man is staring intently at the school?

— Yep, they can’t see him. Weird. This show plays fast and loose with its rules.

— Yuta notices that Rikka hasn’t come to class yet, so he thinks about calling her. Like a true wingman, Sho forces his buddy’s hand. Too bad when Rikka gets Yuta’s call, she absent-mindedly ignores it. She probably doesn’t realize that he’s worried about her.

— Y’see, she had somehow bumped into Anti, and she’s worried about a hungry kid in the rain.

— Anti eats his food as if he’s almost feral.

— Dude, don’t scare the only person who can save you.

— I think this show is missing a decent soundtrack. A lot of these scenes are just so quiet. The animation is pretty good, and so far, the story’s not bad either. The characters… well, the boys could use a little more oomph, but I like what the girls bring to the table at the moment. The only major negative that I have is that the soundtrack or lack thereof. Oh, there’s music! Just not enough of it. And what I do get isn’t all that good.

— Also, I always feel as though music helps to frame the mood and atmosphere of a scene, so without it, the show feels naked.

— Anyways, Rikka tries to offer Anti her bento, but he gets a call from Akane which he promptly answers. Rikka could learn a thing or two from the kid. Anyways, Akane tells Anti to go hog wild, and as a result, the boy transforms into a giant rampaging kaiju. Man, that was fast. We’re only five minutes into the episode! Take notes, SAO.

— Still, where did Anti come from? Did Akane make him? I guess I’ll just have to wait until the episode explains everything.

— All of a sudden, Samurai Calibur crashes through the windows and yanks Yuta out of class. Sho quickly follows suit. After all, they have a city to save. But wait, can people see Calibur now?

— The girl on the right kinda looks like Akko from Little Witch Academia.

— Calibur even quickly locates Rikka and drags the girl along with him. She’s part of the team now whether she likes it or not. And honestly, she can’t really turn them down, can she? What? You’re going to say that you don’t want to help save the world? But to be honest, ever since Calibur fixed the computer, neither Sho nor Rikka have been much help. The Gridman Alliance is mostly just Yuta.

— Akane is having fun. More importantly, the girl is never lacking in confidence. I guess she technically won round one. Even though our hero had managed defeat Ghoulghilas, Akane got what she wanted: the deaths of Rikka’s friends. She then lost round two, but she seems to have gotten over it already. See, kids? Always be positive.

— This is a bit of an awkward moment.

— When Anti starts talking in the middle of battle, this really freaks Yuta out. Thanks to Sho’s big dumb mouth earlier, Yuta is now worried that he might actually be fighting people. It’s one thing to kill a massive kaiju, but a person?! Well, way to go, generic male best friend!

— On the one hand, whether you’re fighting a real person or not, your enemy is threatening to murder your entire city. Sometimes, you just gotta do what you gotta do.

— But on the other hand, Yuta’s just a kid, so I don’t expect him to have the mental resiliency of an adult. It’s not fair to hold him to such standards.

— Yuta starts losing and losing pretty bad. Not only is he reluctant to fight, I think he needs to gain a new weapon every time he meets a new enemy. After all, this show has merchandise to push. At the moment, all he has is Calibur, and that’s so last week.

— When Rikka wonders why things are different this time around, Sho doesn’t have the guts to fess up. That’s unfortunate.

— Calibur flies in and tries to reassure Yuta that the kid is doing the right thing. Nevertheless, what our hero needs is a proper mentor, but I almost feel as though he merges with Gridman when they fight together. As a result, Gridman can’t really be the guiding hand that Yuta needs in the heat of battle. I guess he’ll just have to depend on Calibur for now.

— Man, the buildings that falling down all around these two can’t all be empty, right? And just exactly how many people end up dying every single time Akane pulls her murderous stunts?

— After eating Anti’s latest attack, Gridman appears to have been defeated. Even worse, the computer at the junk shop completely shuts off, so Yuta’s friends have no clue if Yuta is alright. Hell, he might actually be dead for all they know. Elsewhere, Akane begins to gloat over her victory.

— A strange mist quickly passes over the city and restores it back to normal. Huh? I guess win or lose, the powers that be will do their best to clean up the resulting mess. We are told every week, however, that there are victims as a result of these kaiju attacks. I feel like I need the series to address this issue more directly at some point in the future. 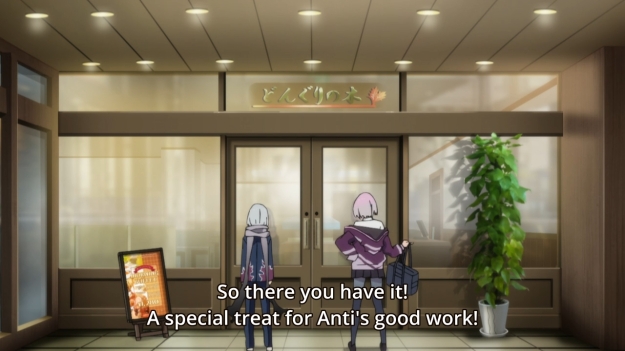 — Akane meets up with Anti to reward the kid with even more food. I imagine a kaiju would have one hell of an appetite. The girl then explains that kaiju don’t have a true form. They just are. Basically, there’s no need to be afraid that you might actually be fighting a real person.

— Scared that Yuta might have died in battle, Rikka thinks that maybe they should drop by the hero’s apartment. But at the last second, she chickens out. Like with her two deceased friends, she can’t bear the thought of Yuta’s existence being completely forgotten by their classmates. This isn’t a bad scene, but again, SSSS.GRIDMAN is letting itself down by having absolutely no background music.

— In any case, Rikka continues to serve as the emotional center of the story. Like I’ve said in previous posts, Yuta’s personality is just too one-dimensional at the moment.

— After Rikka leaves, Sho eventually walks away too. I don’t know why Sho wouldn’t at least bother to check up on his friend. Alright, sure, Rikka can’t bear to stick around. That doesn’t mean that he can’t do his own thing.

— Ah, so Akane did create Anti. Not only that, she created a kaiju that can both 1) disguise itself as a human boy and 2) think for itself. And I guess she gave Anti her hate for Gridman.

— Meanwhile, Yuta’s two friends continue to mope. When Rikka demands to know why Sho was being evasive yesterday, he continues to deflect. Instead of telling her the truth, he opts to disband their alliance. He’s just running away from the problem now. This is not a good look for Sho. He comes across pretty pathetically here. On the plus side, he’s getting more characterization in this week’s episode than the first two combined. It’s just unfortunate that Sho seems to fold when the pressure is on. We’ll see if this has any ramifications in future episodes.

— Rikka is really tearing herself up over the fact that she didn’t answer Hibiki’s call. The fact that he might be dead makes her feel even worse.

— All of a sudden, new faces show up. Judging by their appearance and demeanor, it’s pretty obvious that they’re similar to Samurai Calibur. More importantly, they quickly inform the two kids that Calibur and Gridman are just fine. As for Yuta, well…

— …just call the kid up. And just like that, Rikka and Sho learn that their friend is just fine. Apparently, when Gridman took a lot of damage in the previous battle, it needed to temporarily hide itself in order to heal back up to fighting condition. They then wanted to ambush Anti, but since that’s not happening, the good guys will just have to show their ugly faces first.

— So we get round two of Gridman versus Anti. We even get the same animation and everything. But this time, this dude will lend a hand. As a result, our hero gains a pair of giant punching fists. Y’know, just more toys to buy.

— In the middle of battle, Gridman leans in and asks if Anti is human. Nope, Anti says. He’s all kaiju, baby! And with that, Yuta can now fight with a clear conscience. I don’t think this is a satisfactory resolution, though. So if Anti really was a person, then it’s okay for Yuta to hesitate? I mean, shouldn’t he fight anyways to protect his friends? Plus, what even makes Anti not human? He can talk. He can think. He can eat. Just because he can turn into a kaiju doesn’t take away from the fact that he’s incredibly human-like. Ah, whatever.

— Using Anti’s own attack against him, Gridman quickly gains the upper hand. Then with his new toys, our hero eventually defeats Anti, who then reverts back to his human (but apparently not so human) form. The kid eventually collapses to the ground, but in all likelihood, he’ll be fine. He’s a recurring character, after all.

— In the aftermath, Rikka apologizes to Yuta for not answering his phone call, then quickly rushes out of the room. Once she’s hidden from everyone’s view, she smiles to herself. Well, she’s probably more than happy that her friend is okay, but still, this makes her somewhat of a tsunderekko.

— The events in this week’s episode have pretty much forced Rikka to admit that she and Yuta are now friends. He obviously worries about her, and whether she wants to admit it or not, she was pretty torn up when she thought he was dead.

— Anti gets no love from Akane the second time around.

1 thought on “SSSS.GRIDMAN Ep. 3: Worried about your friends?”