Montmorency reunites with a few old friends, but it’s not all roses.

— After all these years, Charlotte, ruler of her people, still thinks only of Montmorency. Um, okay.

— Meanwhile, our hero is going from city to city, blabbering about how Jeanne will save the country. His rationale? Obviously, he wants to get the people on their side.

— How come people don’t write Montmorency off as just another drunk weirdo in strange garb? ‘Cause he has Astaroth. Look, I’d be speechless too if I saw a fairy floating in front of me. It still wouldn’t convince me to believe in God, though.

— We see half of the philosopher’s stone lodged in Jeanne’s body, beating away like a heart. Meanwhile, the girl is breathing heavily as if she has a terrible fever. I suspect that she needs a steady supply of Montmorency’s saliva to keep herself from going nuts or whatever. It’d be such an anime thing. Well, at least it’s not as extreme as that show about breast milk.

— Astaroth keeps reminding us that she’s the queen of the fairies. Well, where are her subjects?

— She also has bigger things to worry about.

— Jeanne suddenly needs Montmorency’s help, and the guy assures her that she can come to him at any time. Just think of him as her kind oniichan — an oniichan who swaps saliva with his imouto! And yes, that’s exactly what she wants!

— Oh hey, some crazy dude in a bear costume is stalking our heroes.

— Oh lord, it’s exactly what I feared: Jeanne needs constant loving from Montmorency to keep herself sane. She’s literally rubbing her crotch if she doesn’t get enough of his juices. Alas, we need Jeanne to be her badass self.

— A bunch of strange men suddenly attack out of nowhere, but that doesn’t stop Jeanne from jamming her tongue down the main character’s throat. In fact, she kinda needs to if they want to fend off this ambush. We’ll probably get these weird internal shots in every single episode.

— Yeah, y’know, screw it. Let’s just call her Jeanne Alter. After one gross french kiss, she’s back. And no, I don’t play Fate/Grand Order. I actually don’t have a single game installed on my phone. In any case, Jeanne Alter quickly saves the day. She saves the day so fast, we don’t even get to see it.

— The next morning, Montmorency plans to reach out to Charlotte. He basically wants Jeanne to become an official knight, and this will thus rally the people’s morale even further. Unfortunately, some dude with a mad obsession for dolls intercepts our hero’s letter.

— We see Jeanne walking with and talking to Montmorency in a hallway. They’re on their way to see Charlotte… or so they think. When she closes her eyes for just a few seconds, however, the guy has suddenly gone missing. I have no clue how these soldiers managed to kidnap him that quickly and quietly. Nevertheless, our hero should’ve surrounded himself with bodyguards. At least take La Hire with him, y’know? He probably let his guard down ’cause he thinks that he and Charlotte and still friends, but dude, protect yourself. Always prepare for these contingencies. 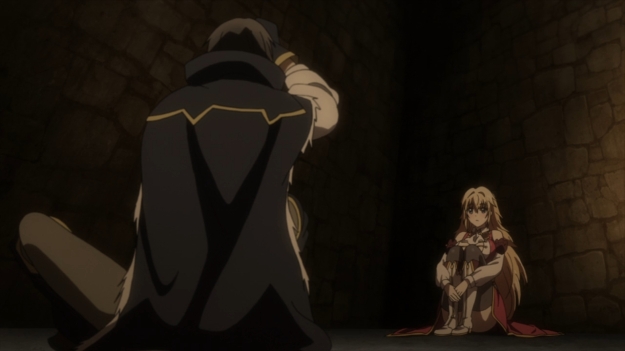 — Montmorency ends up getting thrown into a jail cell with Richemont. What a coincidence. Oh well, time for some old friends to play catch up.

— Even though the country is ravaged by war, Jeanne ends up at a fancy masked ball. Let’s hope she still got enough elixir juice to get out of this mess. Speaking of which, do you think Montmorency tongue-kisses his “sister” every morning just in case they run into trouble? At this rate, he probably should.

— Charlotte never got Montmorency’s letter, so she has no reason to believe that Jeanne is anything special. Even so, she’s not really endearing herself to me with her whole “nobody’s going to save me” shtick. Save yourself, woman. You’re the goddamn ruler of your country.

— Jeanne still manages to stun everyone by seeing through the princess’s body double. She then quickly spots the real princess standing off to the side. I’m thinking she must have had Astaroth’s help.

— Damn, this show is gorier than I expected it to be.

— So Richemont escaped from the English on her own, then became a general under Charlotte. But when she tried to root out corruption within the French palace, she got thrown in prison for a false crime. Wow, this makes Charlotte come off even worse! Why can’t you protect one of your dear childhood friends! Why are you sitting around in a dark room, moaning for a guy you haven’t seen in seven years?

— Montmorency’s kind of an idiot. He’s trying to have a casual conversation with Richemont as if they’re still chums. Again, it’s been seven years.

— Oh lord, now it’s Richemont’s turn to whine about how Montmorency never came to her rescue. Okay, sure, I feel bad that she got sexually assaulted (luckily, the story doesn’t go so far as having her get raped), but I’m not sure what she really expected Montmorency to do on his own. There’s a reason why the guy literally tried to turn himself into an Ubermensch over the past seven years.

— We then see Jeanne speaking to Charlotte privately. How did Jeanne know that she was looking at a body double of the princess? ‘Cause the real princess has humongous breasts. No, I’m not joking. That’s literally the reason why Jeanne saw through the ruse. Sigh.

— This is so retarded. When Jeanne tells Charlotte that Montmorency had suddenly disappeared out of nowhere on their way to see her, the stupid princess instantly jumps to the conclusion that he must have run away. Just like Richemont, she thinks that he abandoned her. Just like Richemont, she thought the guy would eventually come and save her. God damn, man. Jeanne is literally a child with a voice pitched high enough to pierce my eardrums, but she’s the best girl by default simply because she’s not a whiny loser like these two. Is Philip going to be the same way? ‘Cause if so, we may as well just crown Jeanne right here and now.

— Jeanne comes to the main character’s defense, but it’s to no avail. Charlotte just keeps moaning on and on about how much she has suffered. Aw, the poor,. little princess had to live in her safe, comfy palace away from the war while her people died left and right. Gosh, don’t you just feel bad for her?

— All of a sudden, a dude shows up out of nowhere — how do these people keep managing to pull these stunts off without making a noise! — and breaks Jeanne’s arm with a hammer. Unfortunately for the assassin, if you don’t kill the heroine right away, she’ll just heal up from her wounds within seconds.

— Our heroine then snaps the guy’s neck, but as soon as she does so, she runs out of time. How convenient. Also, that sure didn’t feel like three minutes to me.

— Bear Dude then emerges from the shadows and announces his intent to literally carve the philosopher’s stone out of Jeanne’s body. She’ll be fine, though. Despite her appearance, her plot armor is probably second to only Montmorency.

— Last but not least, we see Philip in a carriage that looks to be headed for the French palace. Well, would you just look at that. All four childhood friends are coming together at last. I bet you our hero will now have three girls whining to him about his inability to protect them.

— Hm, if Jeanne l is going to be knocked out for quite some time, someone will have to come to rescue. But thanks to the preview for next week’s episode, we know she’s fine. Also, that is one hell of a revealing outfit for a saint.