— So it didn’t take long for Ash to reunite with Eiji. After all, he’s super smart, so he just instantly knew where to find his lover.

— C’mon, are you really gonna pout? Now hug and kiss!

— It turns out Eiji eventually told Sing everything about the incident with Shorter, but Ash will have none of it. He claims that Sing’s gang will be in danger if they know the truth, so everyone should just continue pretending that Ash murdered Shorter out of cold blood. Well, have it your way, I guess.

— So now that we’ve taken care of the loose ends, it’s time for the sappy stuff.

— And boy does it get sappy: 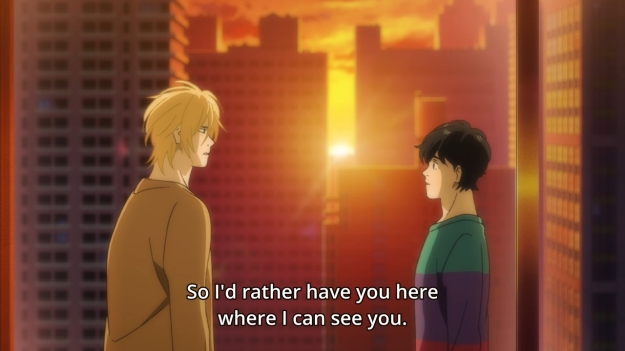 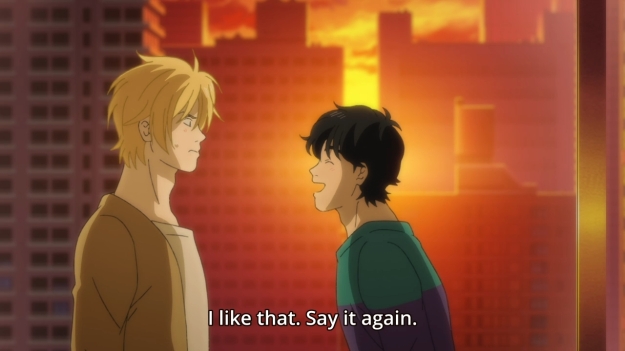 — The problem with their relationship is twofold. First, Ash takes on a paternalistic role. He always sees Eiji as this vulnerable creature that needs to be protected. Hell, he’s probably right, but this has the effect of making Eiji feel inferior and useless. He doesn’t want to drag Ash down, so this brings us to the second point: Eiji can’t bring himself to be completely honest with Ash. He knows that Ash’s enemies will naturally target him, but he doesn’t want to admit it. Well, no relationship’s going to work without trust and open communication from both sides.

— Unfortunately for Ash and Eiji, Golzine and Yut-Lung are now going to team up. You scratch my back, I scratch your back. In other words, you kill my family, I kill your family. Kinda weird how that works, but whatever. Basically, Yut-Lung will help take care Golzine’s enemies in the Foundation, and this will help the old man solidify his influence.

— Meanwhile, Golzine will help Yut-Lung finally get his revenge on his half-brothers. He’s so screwed up in the head that he even wants their entire families wiped out. C’mon, do the kids really deserve to die? Aren’t they innocent?

— Then again, Yut-Lung’s just learning from his half-brothers’ mistake. They allowed him to live, and now he’s going to kill them. As a result, he’s probably telling himself that if he lets these kids live, it’ll eventually come around and bite him in the ass. He might as well wipe them all out.

— Last but not least, they both want Ash’s booty. They just understand, however, that they need a little more help with this. It’s been proven over and over that neither of these two organizations can keep Ash under their thumb for very long. They’ll need to resort to extreme measures. Luckily, Golzine has connections.

— Next, we see Ash and Eiji on a ferry. The former starts opening up about his mother and how she eventually abandoned him. Ever the optimist, Eiji tries to convince his partner that the woman must have loved him, because of… uh, his name. Yeah, she worked so hard to give Ash a good name, so she must have loved him! For me, actions speak louder than words. If she loved her son, she wouldn’t have abandoned him. It’s as simple as that.

— Yes, I know that some people can’t afford to raise a child. I understand why they need to give their children up. At the same time, however, you can’t convince me that those people also loved their children. Nuh-uh.

— Anyways, Ash and Eiji were going to meet up with Max and the rest, but then something starts spooking the main character real bad. Let’s just say that his sixth sense is kicking in.

— Normally, Ash would instantly identify his stalker. Unfortunately, Golzine hired someone so good at their job that the kid is having no luck. All he has is this unsettling feeling of paranoia, and it’s driving him nuts.

— Elsewhere, Yut-Lung’s revenge kicks into high gear. One by one, top members of the Lee family are found dead. Oh well. Probably shouldn’t have degraded and murdered his mom.

— We eventually learn that Golzine had reached out to an assassin by the name of Blanca. The guy is supposed to be retired, but he’s so fascinated with Ash that he just has to take this job. Basically, our hero is so awesome that his own awesomeness will be his own undoing. 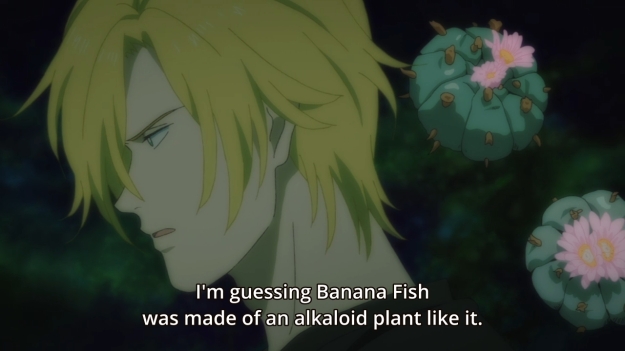 — All by himself (and his 200 IQ), Ash manages to dig up some really important information regarding Banana Fish and its origins. Unfortunately, he still needs to know more. So later that night, he goes to seduce a certain Senator Kippard. Y’know, the pedophile. Ash even has blackmail material to use on the dirty bastard. This is one of the few times that censorship is a good thing! Well, unless you like naked senator butts…

— Unfortunately, just as the senator was about to speak, Blanca assassinates the guy with a bullet right through the head. It is then revealed to us that this same guy had taught Ash everything that the kid knows. So there you go. Only his own master can take him down… maybe. We’ll see.