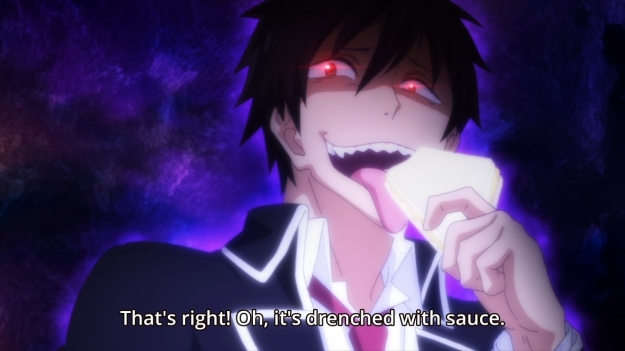 Even though the sports festival is coming up, this week’s episode is a tale of two halves.

— In the first half of the episode, Romio wants something from his girlfriend. She initially thinks he’s talking about sex, but nope, he just meant a bento! Girl, get your mind out of the gutter!

— But seriously, are you going to go to your white girlfriend and ask for a bento? We don’t exactly do this sort of thing in the West.

— Well, sure enough, Juliet’s one of those love interests that can’t cook a lick. Anime characters are either brilliant at cooking or completely terrible at it. There’s no middle ground.

— Personally, if you’re bad at cooking, you either have no sense of taste, or you simply can’t follow directions.

— So in the end, Juliet presents Romio with this picnic basket full of food. At least she didn’t make a bento. In fact, she didn’t make it at all! But Romio is too gung-ho to taste the food that he didn’t even let her explain.

— And this is when the hijinks begin. First, a jealous Char “tricks” Romio into eating her shoe. I say “tricks” only because only someone as dumb as Romio would fall for this.

— Then she tries to abscond with the “bento,” but runs into an anime-only accident.

— So the picnic basket ends up near Scott, and as a result, he thinks it’s for him. This naturally ends up causing a fight between him and Romio.

— There’s some minor backstory for Scott, but who cares?

— In the end, the “bento” ends up in a pig pen (why is there a pig pen on campus?), and neither Romio nor Scott get to taste the food. Our hero is devastated, but his girlfriend finally gets the chance to confess that she can’t actually cook at all. Why didn’t she tell him this in the first place? Well, she wanted to seem perfect. Pfft, if she really wanted to be perfect, she needs to upgrade your boyfriend.

— Romio then gets her burnt cookies as a consolation prize, and well… they taste about as good as they look.

— Anyways, this boring bento trope needs to be flipped on its head already. I’ve always cooked for my girlfriends, so I don’t see why these boring protagonists can’t do the same. If you want a romantic moment to share with your SO, take the reins into your own hands. Make her a bento.

— Elsewhere, Scott gets punished by Char for, uh, some reason…

— Alright, time for the second half of the episode. So what’s so great about this sports festival anyway? What do you get for winning? Apparently, the MVP gets to make a special request. Right off the bat, Hasuki’s friends suggest that if she wins MVP, Romio should dance with her. Well, she knows that he has a girlfriend, but the problem is that he’s stupid. He’s so stupid that this is his idea of dancing. He’s so stupid that he gives her false hope.

— Meanwhile, Scott wants to win MVP so that he can dance with Juliet. When Romio overhears this, he gets pissed off. Same ol’ song and dance. Nothing surprising here.

— But then we are introduced to yet two new characters: Somali Longhaired and Aby Ssinia. Yeah, the White Cats are all named after cats. I guess I just didn’t notice until now. We have Juliet Persia, Chartreux Westia, Scott(ish) Fold… and I guess they just got lazy with Aby Ssinia. Damn, they didn’t even try.

— So what’s up with these guys? Uh, nothing worth talking about at the moment. Somali is in love with Aby, but Aby is in love with himself. Nevertheless, if he wins MVP, he would like for him and Juliet to start dating. Yeah, good luck with that.

— What about Romio, you ask? Does he want to win MVP as well so that he can dance with Juliet? Not yet. Throughout the episode, he’s been pissing and moaning on and on about how the sports festival sucks. But this is only because he lost it for his team least year. ‘Cause y’see, he’s an idiot, and he started running before the gun went off. But instead of just learning from his mistakes, Romio would rather pout and complain about the sports festival instead.

— I like how these dorks are all competing in their uniforms.

— But near the end of the episode, Juliet invites Romio to help her practice the three-legged race. He gets to be so close to her, it’s so special, blah blah blah.

— Then the girl reveals that she only did this to try and cheer him up. She’s been noticing his depressive moods lately, and she wanted to encourage him. Also, she’s going to try hard herself, because winning will give her influence, yadda yadda yadda.

— And just like that, Romio is motivated. Well, he’s motivated specifically because he gets to make one special request if he wins MVP.

— But that’s all for this week’s episode. We’ll have to check in next week to see who gets that stupid MVP.

— This could’ve been a cute romantic comedy, but Romio is so dumb that it’s hard to root for him.

1 thought on “Kishuku Gakkou no Juliet Ep. 5: A meal fit for pigs”