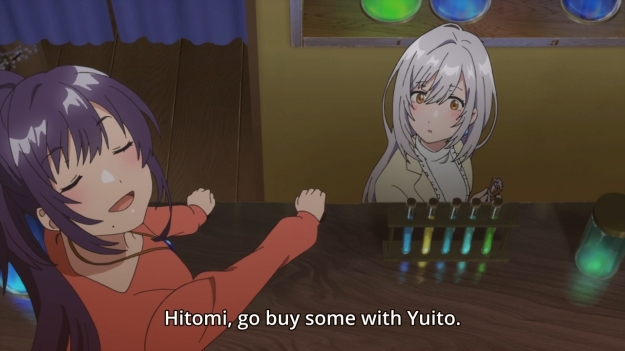 Man, who knew obaachan could be such a wingwoman. Sounds like somebody wants great-grandchildren!

— “Fun with friends is what being young is about.” Anime storylines in a nutshell.

— So to celebrate the formation of the new club — the Magic Photography Arts Club, that is — Kohaku proposes that they throw a party at her place. Must be nice to have understanding parents.

— Apparently, our resident mage also doubles as a fortune teller, and she’s quite popular. Check out this long line, though. No wonder the school is exasperated with her.

— I’m disappointed, though: she’s not even wearing a silly costume or anything.

— So Asagi and Kurumi drop by to have their romantic fortunes told. If you have to ask this question, then you already know that the outlook is not so hot. But let’s face it: Sho has been trending towards Hitomi whether she wants this or not.

— Geez, just spell it out, why dontcha?

— Asagi’s dad has a silly moustache.

— Well, Sho and Asagi are childhood friends, so he probably just never even thought of her in that way. He probably only sees her as a little sister or whatever, and this is why he can be so comfortable around her. This is where that dreaded C word comes into play: communication, communication, communication. It’s the 21st century, man! There’s nothing wrong with a woman asking for what she wants! Unfortunately, modern attitudes don’t always match up with old-fashioned sensibilities. I bet she wants him to notice her feelings or whatever lame romantic nonsense that people still believe in. But look, you gotta play in order to win the game. You can’t score if you never take a shot. 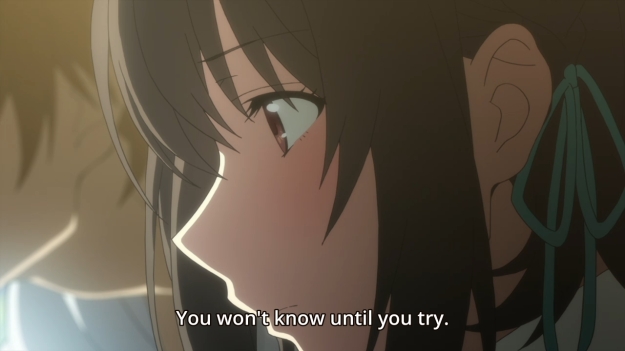 — With that being said, Hitomi isn’t really a rival, because 1) our heroine doesn’t have any feelings for Sho (at least not at the moment) and 2) again, Asagi hasn’t made any moves.

— Speaking of Hitomi, this outfit makes her look like an adult. Well, not that I’m complaining. School uniforms don’t do anything for me.

— So our heroine has to watch the shop while her obaachan goes out to look for an ancient magic text. We’re told that Hitomi’s presence has made Kohaku focus even harder on her studies, which is great. But what does this mean for the future? Will this change how things play out when she grows up and becomes an adult? Or have we created two different timelines? Actually, you know what? It’s best not to take these time-traveling stories too seriously.

— As soon as Hitomi tells herself that she needs to do her best, Yuito shows up. The shop is empty too, so the two of them get to hang out alone. Talk about magic…

— The girl can’t help but ask about Yuito’s next drawing, but he hasn’t had much inspiration lately. He thus jokingly wonders if there’s star-sand that would help him out in that regard. He ends up telling her that he’s just “musing,” but that’s not going to stop Hitomi from fulfilling her quest.

— Afterwards, Hitomi confides in Kohaku about her new objective, and the latter suggests making her own magic-infused star-sand. A personal touch makes it ever the more romantic, but of course, Hitomi is oblivious on that front.

— Our heroine didn’t use to be interested in magic at all. Hell, she flat-out stated early on that she didn’t like magic. And yet, we now see her willingly embrace a magic-related challenge without pause. This is the same girl who was afraid to sit down and paint a picture for fun, so in a way, Hitomi has made a  lot of progress. And like I said, Kohaku’s not blind. She can tell that Yuito is the catalyst. 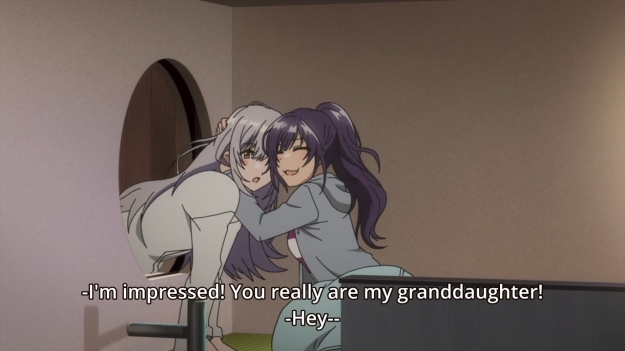 — Grandparents can be so embarrassing.

— This show is full of meaningful moments of silence. The next day, Sho and Yuito come across Hitomi trying to use a vending machine for the first time. When the girl finally leaves with her drink, Sho goes, “She’s quite the character, that girl.” But Yuito doesn’t respond. Instead, the show just lingers on his face as he stares off into the distance. What is he thinking? Why does he look so serious?

— After Sho gives Hitomi a quick tutorial on how to use the darkroom, the girl asks if she could also practice her magic here. Like Kohaku, the guy notices that her attitude towards magic has done a near 180, but he doesn’t know why. Hitomi earnestly replies that she’s motivated by the fact that her magic could make someone happy, and this only serves to impress Sho even more. Yeah…

— I guess I’m just dreading the eventual drama between him, Hitomi, and Asagi. You know it’s coming, too. Between the fortune telling nonsense and all those moments of Asagi looking sad in previous episodes, we’re in for an awkward moment between those three (and their onlooking friends). What makes this even more ridiculous is that our heroine doesn’t have any feelings for Sho. And if you wanna get technical about it, she doesn’t really have feelings for anyone at the moment. Yeah, she’s drawn to Yuito, but only because she can see colors in his drawings. That in and of itself doesn’t mean anything yet. So to rope her into a love triangle would be so silly because she’s simply not a willing participant. Hell, she’s not even aware that she’s a participant.

— Screwing up a spell is like burning a dish, I guess.

— Elsewhere, we see Yuito working hard on his next drawing, but he’s still having no luck. Is there a name for this like writer’s block? Artist’s block?

— The next day, Asagi is the first to arrive to the party, and as a result, Hitomi gets to listen to the girl open up about her friendship with Sho. Boy, this will just make the eventual fallout even worse! I hope Asagi won’t feel as though Hitomi is betraying her if Sho ends up liking our heroine. I mean, I hope not, but this is always a possibility. 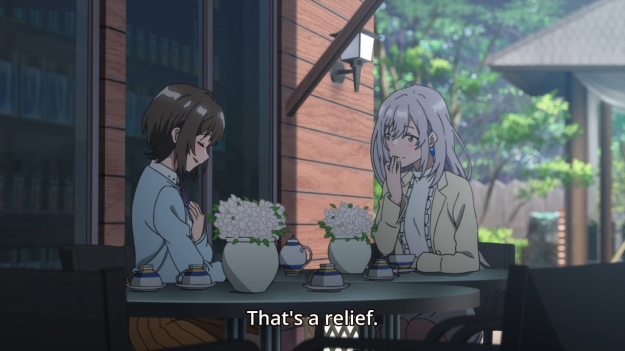 — I do like the fact that these characters seem to have a new outfit to wear everyday. It’s so lame when anime characters just wear the same clothes over and over.

— Looks like Hitomi was eventually successful in whipping up her own star-sand. So it’s not quite making the guy a bento, but the girl still had to “cook” something up for Yuito.

— Hitomi set up all these dainty tea cups, and Asagi brought rabbit-shaped cookies for the party. As for the rest? Gyoza, french fries, and a whole bunch of other fried foods. I just think the contrast is funny, but I gotta give them thumbs-up on this one. I’m not very keen on tea and biscuits. Gimme those gyoza.

— Midway through the party, Hitomi leaves to wrap her star-sand up. Gotta make it pretty for the guy, after all. But honestly, a jar is way more practical than some silly bag.

— When Hitomi is too embarrassed to hand her gift over to Yuito in front of everyone, Kohaku comes up with a plan to isolate those two. This is too amusing.

— Midway through their juice-buying adventures, Yuito takes Hitomi to see a nice view of the city. Eh, what can I say? It’s a city. But to these anime characters, it is one amazing spectacle. And as a result, this is the perfect moment for Hitomi to hand over her star-sand.

— It sounds like Yuito has been thinking about her problem a lot. Like us, he doesn’t understand why his drawings would be so special to Hitomi either.

— Y’know, this could inadvertently backfire on the girl. I can easily imagine Yuito not taking Hitomi’s feelings seriously at some later point in the series, because he might assume that she’s only paying attention to him in order to get something in return.

— Plus, maybe he doesn’t want to deal with all this pressure.

— Or Yuito could just be a nice guy and roll with the punches. We’ll see. 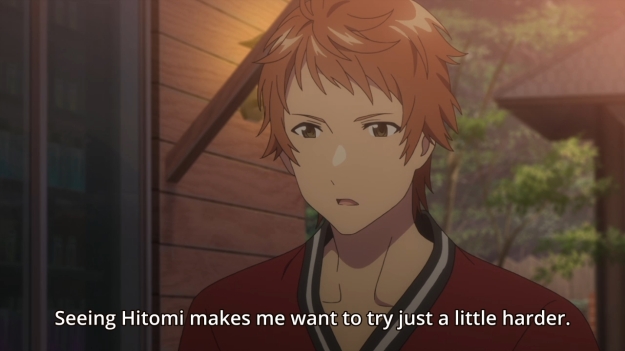 — Meanwhile at the party, Sho can’t help but talk about Hitomi even though she’s not there. He’s going on and on about how our heroine has him all motivated to seize his future! He then tells Asagi to step it up, which really pisses the girl off. She also resents the fact that he seemingly went all out for this party just for Hitomi and Hitomi alone. It doesn’t really matter if this is true or not. What matters is that she feels hurt and neglected by her best friend ever since the new girl showed up. Asagi eventually storms away from the table, and sadly, Sho doesn’t even bother to chase after her. Kinda weird for childhood friends, don’t you think?

— But it’s one of those situations where everyone’s at fault. It’s one of those situations where everyone is annoying in their own way. Asagi doesn’t communicate her feelings clearly, but at the same time, Sho is not even trying to understand why his best friend is so hurt. Meanwhile, Kurumi calls him a blockhead, but she doesn’t try to help clarify the situation either. Just a bunch of immature kids and their hurt feelings.

— Ultimately, Kohaku is the one to step aside and help mend Asagi’s feelings. Way to go, club prez.

— Our resident mage and fortune teller gives the sad girl a pep-talk. She assures Asagi that we are all ultimately responsible for our own futures, so nothing is set in stone. Plus, Hitomi doesn’t even like Sho, and it takes two to tango. I know strong emotions are usually irrational, but if Asagi would just pause and think for a second, she should realize that even if Sho goes for Hitomi, it’s not like he would automatically win her heart.

— Apparently, this box contains every single failed batch that Hitomi tried to cook up. Kohaku then gets in trouble, because Hitomi had used up all of the ingredients. I guess she should’ve known better.

— In the end, Asagi accepts that she needs to change and become more courageous, so she tells Sho that she’s thinking of making those rabbit-themed postcards. Sho had suggested this earlier in the episode, but she refused out of embarrassment. As for her and Sho, well… that is going to take a little more work.

— Still, it’s kinda awkward how those two just made up without anyone apologizing to each other. 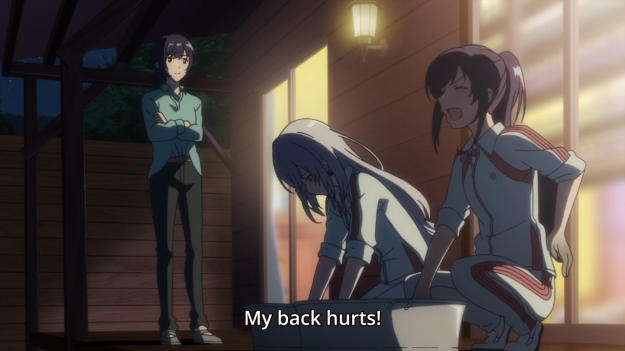 — After everyone leaves, obaachan and her granddaughter are punished together. After all, family has to stick together.

— In the privacy of his room, Yuito uses Hitomi’s star-sand, and what he ends up seeing is very reminiscent of what Hitomi saw when she gazed at his last drawing. In a way, I guess this helps him understand her a little better.

— But all of a sudden, the golden fish disappears into his drawing pad. It’s a cool scene… that kinda ends abruptly. Still, you have to wonder what that golden fish is supposed to represent. What did Hitomi accidentally end up saying through her magic?

3 thoughts on “Irozuku Sekai no Ashita kara Ep. 5: Kohaku with the assist”