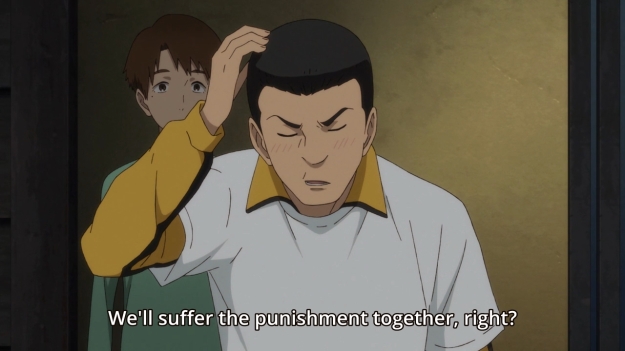 In the end, it turns out that King is just tsundere.

— The episode opens with Shindo particularly worried about King, but the latter continues to isolate himself from the rest of the group. Granted, he never wanted to run in the first place (like most of them), but his anger is misdirected. Running for half an hour in the morning and again in the evening won’t hurt his chances at landing a job. King’s just trying to find something to blame, because it’s easier than admitting to yourself that you’re just not as qualified as you think you are.

— As for the rest of the group, not much has changed. You can still divide them into two distinct groups. Some of them are enthusiastic, some are not. But at the end of the day, everyone else is willing to run. Even Yuki.

— Haiji tries to be as upbeat as possible, but behind the scenes, he’s also worried about their lack of funding. After all, like every sports anime ever, you’re looking at a ragtag team of nobodies, one guy recovering from a terrible injury, and last but not least, a single prodigy (Kakeru).

— Speaking of Kakeru, we see him ask Nico about Haiji. For instance, what kind of runner is he? Well, who can really say? In the end, all we really learn is that Haiji has always been passionate about running, but I could’ve guessed that all on my own.

— To help alleviate their money woes, the enthusiastic guys come up with the bright idea of attracting a fan club. I wouldn’t think this would work, but it actually does. Who knows? Maybe Japanese people go for that kind of thing. 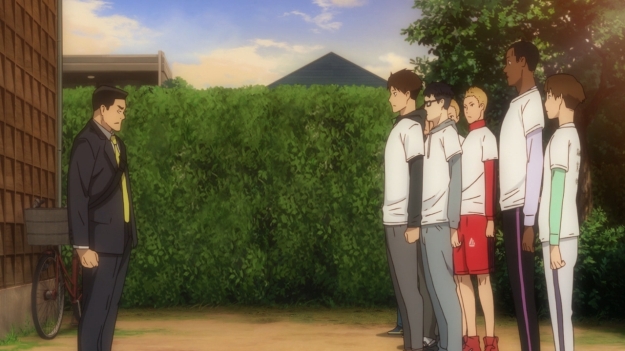 — But again, while everyone else is willing to run, King remains obstinate. He argues that running won’t help him get a job, but again, it couldn’t hurt. Look, I don’t particularly like how Haiji roped these guys into running, but I can’t agree with King’s attitude either. I could understand his position if he actually was doing everything he can in order to land a job, but that’s not actually true. He’s not actually spending every waking moment on this endeavor. Sometimes, he sits around in his room and watches game shows. Sometimes, he goes down to the mahjong parlor to waste what little money he has left. Sometimes, he just mopes in his dark room. Sure, nobody can work 24/7. We all need to take a break and relax. But if you have time to do nothing fruitful, you may as well carve out half an hour to run. Guys like Nico don’t buy into Haiji’s pipe dream either, but at least he’s owning it by running for his health. The mahjong is especially bad, because if you have the time and energy to dick around with gambling, then you can sure as hell go jogging with your friends.

— Anyways, that last part is actually what ends up hurting King the most. After leaving the mahjong parlor with barely any money left, the guy happens to see his friends recruit two members to their fan club. They’re having fun, and he’s not a part of it. More importantly, King has no one to blame but himself.

— Later that night, Shindo tries again to reach out to King, so the latter wants to know why the former is taking all this running business so seriously. Well, Shindo’s reasoning is kinda… weak. First, like most people, King doesn’t want to work. He’s only looking for a job because he knows he has to. Shindo thus tries to relate to his buddy by using the same line of thinking. The guy admits that he didn’t like running all that much at the start. He also admits that he didn’t like being forced by Haiji to run. So why is he so gung-ho about it? Now it’s better to choose to run rather than being forced to run. Um, yeah. Luckily, running is a pretty innocuous activity, but you can’t exactly apply that logic to a lot of things in life. I’ll just let you guys use your own imaginations. 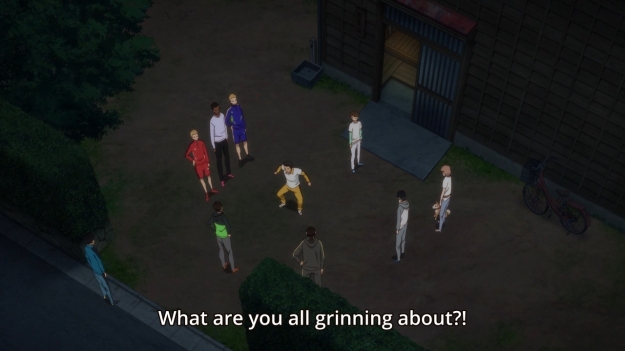 — Anyways, that conversation did the trick. The next morning, we see King finally joining the guys on their daily morning run albeit somewhat reluctantly. He also admits that running might very well help him land a job. He really should’ve just adopted this mentality from the start.

— Afterwards, Hana happily informs the gang that a lot of them have made drastic improvements to their times. This is especially true for Prince, but I mean… when you’re at rock bottom, the only way is up.

— Near the end of the episode, Kakeru and Haiji decide to engage in a almost philosophical discussion about running. Since the latter admits that he doesn’t quite know what running means to him either, I don’t feel like doing the work of unpacking their feelings. Let’s just call it here and end the episode on a staring contest.