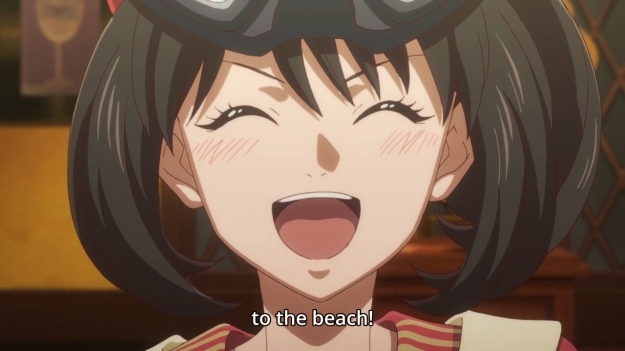 For some odd reason, Asuka wants to go to the beach even though it’s practically winter. But hey, since these girls can travel to parallel dimensions, there must be a fragment where the weather is perpetually perfect! As a result, Ero-Yu, i.e. Sexy Yu, is here to once again lead these girls astray. And since this is a beach episode, you know what that means: fanservice, fanservice, and more fanservice. Goddamn, who knew Asuka was so stacked? Maybe that’s why Ero-Yu is so desperate to seduce one, because she seems to have lost her original Asuka. But I digress. It’s just funny how careless these girls are. Even Seriousuka ends up letting her guard down. Every time they travel to a different fragment, they quickly realize that their ideal world is not so ideal after all. Nana thought she wanted to get married to a hot guy. Well, that didn’t turn out so hot. Mia thought she wanted to uphold justice. That didn’t turn out so hot either. So what happens if we make the classically-introverted Chloe the link? We get a world in which everyone is isolated to their own private islands. Whenever you need anything, you just order stuff via a phone, and a drone will show up with your package. That’s, uh, sure is something.

Apparently, Chloe was raised in the West where we’re totally individualistic and thus shun… other people’s… company? Wha…? Is the implication here is that Japan doesn’t have its own introverted shut-ins? Whatever, just roll with it. Basically, the girl’s afraid of losing her old identity, so she’s been sort of pushing her friends away. Hell, according to her friends, Chloe has already started avoiding them on the weekends. I can kinda empathize with the girl. I like alone time myself, which is what I often communicate to my loved ones and friends. As a result, I think she’s overthinking her problem. Maybe she just needs to communicate her needs and boundaries to her friends. In any case, this brand new fragment takes Chloe’s desires to the extreme: she’s now locked away on her own island away from the rest of the girls. When they want to communicate with her, they have send a drone to deliver a handwritten letter. I just think it’s silly that you would literally need to escape to our own island getaway in order to isolate yourself. You can do that easily enough in the real world. If she doesn’t like Asuka bugging her, just ignore the girl’s calls and messages. It’s that simple.

But in any case, it quickly becomes apparent that Chloe’s paradise is just as problematic as all of the other fragments they’ve visited. Actually, you could easily argue that this is the worst one yet. In less than a single day, Chloe’s friends are already addicted to their phones. Seriously, look at these girls. They’ve got that crazy glint in their eyes. Everything is controlled by an AI by the name of White Goat, and it seemingly wants to turn people into mindless consumers. Maybe this is all a statement against conspicuous consumption, but to what end? What’s the point of brainwashing these girls? How do you even make money to afford anything in this world? I guess we’ll have to keep watching to find out the answers to these questions. Oddly enough, ditzy Asuka is unaffected. As for Chloe, her other self might have been a programmer who was close to figuring out this world out. Every girl has resolved their problems in two episodes, so I expect Chloe to do the same. In other words, she’ll more than likely get her own special transformation by the end of next week’s episode.

For me, this episode epitomizes the show’s wasted potential. In order to keep themselves warm, Sugimoto and Asirpa literally hide inside of a deer’s body. He then starts talking about how everyone loses a fundamental part of themselves when they go to war. Some people get their hearts back when they return home, but a lot don’t. Like Sugimoto, for instance. This tender, vulnerable moment is then interrupted by Asirpa munching on raw deer liver from the inside of the deer’s body. We then swing right back to dead seriousness as Sugimoto thinks about the good ol’ days — the good ol’ days when he ate dried persimmon as a young man. He’s lost his innocence, and this realization brings him to tears. I’m sure Golden Kamuy‘s goofy moments appeal to a lot of people. After all, both the anime adaptation and the manga appear to have a lot of fans. It’s not to my taste, though.

Once they’ve undressed, the dying person will frequently try to crawl into a small, enclosed space. For which reason, victims of hypothermia are often found naked, squeezed into cupboards or beneath beds. This is called Terminal Burrowing Behavior.

Don’t worry, Ning. You’re not the only person who’s tired of you and your sister having the same argument over and over. Ning wants to murder (yeah, she wants to murder the bad guys, but still…), but Yin wants to stick her head in the sand and pretend that she and her sister can run away from the rampaging Taibai Empire. To their credit, however, these two do make up by the end of the episode. Ning even tells Yin to stop blaming herself for the past. Let’s hope that these two have finally cleared the air and realized what they need to do in order to move forward. We also learn an interesting tidbit: apparently, Yin has some important lady’s soul, which is why she is the only person who can use the mythical Tianshu. Ning ultimately realizes that she owes almost everything to her sister.

Elsewhere, a guy tries to assassinate the child empress, but let’s just say that Studio Deen’s animation prowess is not so hot. As for Zhao, he opens up to her about the past haunting him. Not only can he not sleep, he vividly remembers the night that her Empire attacked his village and killed his childhood friends (he still thinks Yin and Ning are dead). He then wonders why he can let go of the past. Gee, I dunno, dude. Oh well, let’s go back to dutifully serving the very same Empire that destroyed your peaceful, idyllic life! The best part is when Cheng suggests that they can return to his home one day and construct graves for his dead loved ones. Yeah, yeah, my Empire murdered people senselessly, but it’s cool. We’ll just put some meaningless stones. So of course, Zhao’s eternally grateful. No wonder she sees him as her toy. The dude’s got no dignity.

Even if Yin doesn’t put Zhao out of his misery one day, the child empress’s attendants may very well take it upon themselves to carry out this dirty deed. I was also amused by a dude managing to score by claiming that he’ll bear the burden of the children in the conflict between the rebels and the Empire. Smooth.