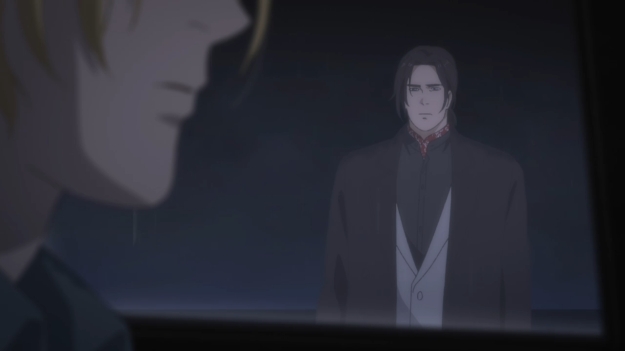 Apparently, Ash isn’t invincible. As seemingly infallible as he has been all series long, the kid won’t even try to oppose his former mentor. Just the pure realization that he’s up against Blanca is enough to make him surrender without even putting up a fight. He’ll throw a punch, but only after the fact. And even then, Ash only wants to spar with Blanca in order to beg the man to spare Eiji’s life. So that’s ultimately what our hero’s self-sacrifice is all about. It is for love. Banana Fish portrays a world in which the rule of law is nothing more than a farce. Our greatest institutions are rotten to the core, and each individual is either prey or predator. Blanca deeply wants Ash to be a predator. It even sounds like he came out of retirement with the hopes that he could put his former student back on what he thinks is the right path. Yes, in the short term, surrendering to Golzine will subject Ash to all sorts of abuses and indignities. But the assassin truly believes that the kid would eventually inherit the kingpin’s empire and thus become king of this lawless concrete jungle. As a result, Blanca warns Ash to stay away from Eiji. Stay far away because no lynx, as fierce and mighty as Ash could be, would ever stand the chance of protecting a rabbit from all of the other predators around them.

What makes Blanca’s warning so ironic is that Eiji has already ruined Ash in a sense. In his new friend, Eiji has found a pure, innocent love that makes him happier than he’s ever been. That’s why he surrendered so easily. And amusingly enough, this love is also what confounds both Blanca and Yut-Lung. Neither men can understand the depths of Ash’s love for Eiji. Well, there’s a telling quote from Islands in the Stream, the Hemingway novel prominently featured in this week’s episode:

“Happiness is often presented as being very dull but, he thought, lying awake, that is because dull people are sometimes very happy and intelligent people can go around making themselves and everyone else miserable. He had never found happiness dull. It always seemed more exciting than any other thing and capable of as great intensity as sorrow to those people who were capable of having it.”

Unlike Ash, Eiji is so naive. He also knows so little about the world outside of his country. In a sense, you could even call Eiji dull. In the first half of the episode, we actually see these two boys act like an old, married couple straight out of any sitcom. This scene is very tonally dissonant when compared to the rest of the series. Their circumstances haven’t changed. They’re still fighting for their lives. They still have a massive conspiracy to uncover. They still have to hide from dangerous, cruel men who wouldn’t hesitate to defile and degrade them with a snap of their fingers. And yet here we are, watching Ash and Eiji engage in a domestic squabble. For a brief moment, it was almost as if these two had retreated into their own private bubble and become ignorant of the world around them.

The same thing happens again midway through the episode. Ash had just realized that he’s up against his former mentor. He also knows that he can’t win. He’s been racking his brain, desperately trying to figure out what he must do. Eiji and Ash proceed to engage in yet a seemingly banal conversation. The former suggests that the latter should visit Japan once they’re done here — as if it was that easy. What would he even do in Japan, Ash asks. Become a model, Eiji replies. What’s Tokyo like, Ash asks. Oh, it has lots of people and cars, Eiji replies. Again, these two have retreated to their own private bubble and become ignorant of the world around them. And they’re happy like this. This is also when Ash ultimately realizes what he must do. As Eiji lays sleeping, Ash swears to himself that he would never let anyone else hurt Eiji.

For everyone else — for all the smarter, wiser people out there — it seems like you must either kill or be killed. That’s why Yut-Lung looks so shocked and hurt that Ash would willingly hurt himself in order to protect Eiji. I thought you were smart. I thought you would fight for your own survival. Who is this kid and why does he deserve your love so much? Why has nobody loved me the same way that you love him? Why would you throw it all away for some simple, dull boy? What these men never seem to understand is that Ash has always been motivated by love. Again, this is a harsh, cruel world where the rule of law is in shambles. There is no justice when justice can be bought. And in the face of such adversity, Ash has only managed to survive by hold steadfast to his love. First, he struggled out of love for his brother, and now, he’s fighting to protect Eiji. It’s telling that he persistently refers to the Japanese boy as his oniichan. And if Ash’s love ultimately ruins him in the end, that’s okay. ‘Cause he’ll have protect the purest thing he knows, and he doesn’t care if that makes him stupid.

Anyways, as much as Ash wants to protect Eiji, Eiji also wants to prove that he can step and protect Ash in return. Ever since his encounter with Yut-Lung, the Japanese kid has been haunted by the fact that he’s nothing more than a burden to Ash. As a result, I expect to see him do whatever he can in order to rescue Ash from Golzine’s clutches. Up until now, Eiji has pretty much fulfilled the role stereotypically assigned to the more feminine partner in a two-person romantic relationship. This episode epitomizes this dynamic between the two boys. Eiji had to drag Ash out of bed. He had to make him breakfast. He had to force him to shower. He even had to remind him to take off his clothes before even showering. Then as Ash left his side, Eiji knew that his partner was lying, but all he could do is sit tight and wait. Sit tight and trust that Ash knows best. It’s almost like emotional labor. Not quite, but almost. But ultimately, this is not the only role that Eiji wants to fulfill in this relationship. He didn’t come all the way here and stay in the US just to be passive, hoping that everything will eventually work itself out. We’re near the end of the series. There’s probably only a handful of episodes left. If he’s not going to step up and save Ash, then when?

Let’s say this happens and it happens successfully. Will Ash be grateful? Probably. But will he also be happy? I dunno. He’s always wanted to protect Eiji from this world. He’s always wanted to keep Eiji’s hands clean from bloodshed. But if the kid must learn to do what Ash does on a regular basis in order to save him, then will Ash consider himself a failure? Some food for thought…