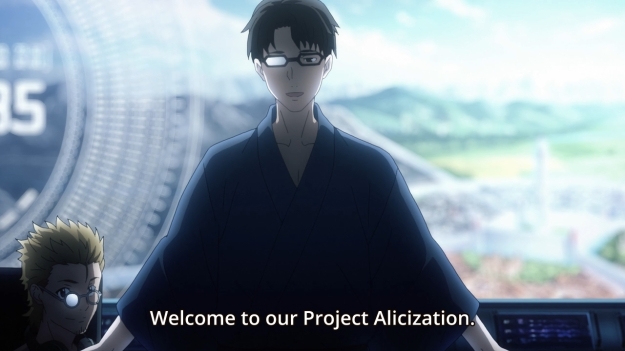 Oh boy, time for an episode that is drier than a Wikipedia article.

— Basically, Kirito suffered brain dam–… uh, even more brain damage, and as a result, modern medicine can’t cure his stupidity. But maybe — just maybe! — we can heal his soul… by playing video games! SEE MOM? I’M NOT WASTING MY LIFE AWAY IN WoW. I’M HEALING MY SOUL!

— Kikuoka then proceeds to spill the beans behind this entire top secret government project to some random civilian girl. Like… why? Isn’t it enough for her to know that Kirito is safe? Oh right, right… we can’t tell a proper SAO story without mountains and mountains of exposition.

— So as predicted, they’re trying to create super AI… but from the “bottom-up.” And somehow, sticking artificial souls into a hyper-realistic MMO is just the way to do that. ‘Cause you see, you don’t want to just give them knowledge and experience. They have to earn it themselves… via a video game!

— This isn’t really developing AI in the traditional sense, though. If characters like Alice and Eugeo are just artificial souls, then sure, I suppose you could pedantically argue that they have intelligence that has been artificially created. But c’mon, they’re essentially humans. These researchers scanned a human soul and created copies, so they have human cognitive processes. Sure, they’re not humans born from flesh and blood like you or me, but they’re still humans. This isn’t the same as actual intelligence somehow emerging from just bits of programming code cobbled together. This is different.

— I guess some people would argue that the brain is just like a computer, but that’s a vast oversimplification. But anyways…

— So we have the age-old problem of a clone mistaking itself for the original, but this time, we’re dealing with souls in a machine. Kinda like brains in a vat, too. Higa, one of the researchers, proceeds to talk to a copy of himself. Obviously, there’s something very inhuman about this.

— Direct copies don’t see themselves as copies. Again, they see themselves as the real deal, and when confronted by this incongruity, their souls eventually fall apart. They become incapable of rational thought. From start to finish, we see a direct copy of a soul deteriorate in just over a minute. I guess we find this disturbing, because we accept that these are legitimate human souls trapped in a machine — legitimate humans souls born to be experimented on and eventually implode, because our human psychology — we speculate — wouldn’t be able to cope with such a situation.

— So how has Kikuoka gotten around this problem? By copying the souls of babies and raising them within a video game. In doing so, you essentially create a whole new person, since nurture now plays a crucial role in shaping them.

— As a result, Rath has raised a batch of good artificial souls. Too good, you might say.

— Yep, unlike us shitty humans, artificial souls like Eugeo are incapable of breaking the law. Or rather, they won’t normally do so. So this world is, um, a paradise? Well, that’s no good! Y’see, these straight-edge losers keep refusing to murder each other, but we all know that soldiers are born to kill! 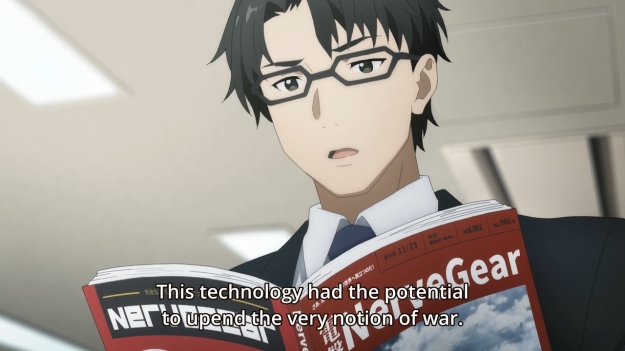 — Yay, exposition within a currently existing exposition: Kikuoka now tells us that his dastardly plan has been in the making since the very start of the series. God, this episode is almost half over, and we’re still stuck listening to this guy go on and on about this project and his involvement in it. SAO‘s storytelling has not evolved one bit over the years.

— Higa’s reasoning for being here is stupid. His friend died in a war, so he wants to aid a project that will send artificial souls to war instead. They’re still humans, jackass. You can pretend that they’re artificial intelligence all you want, but you’re still copying human souls and raising them. As a result, they can still feel pain and anguish. They can still despair. So what’s the goddamn difference? You’re just creating an arbitrary distinction between humans being created via an organic process (s-s-s-s-sex!) and humans being created via a machine.

— But I suppose this opens up a larger discussion vis-a-vis actual artificial intelligence. Let’s say we develop robots that can rival humans in intelligence. Would it be unethical to send robots to war? Well, there’s a crucial difference here: our notions of robots don’t typically involve human feelings or anything analogous to them. They can only feel pain if you give them that capability. The simple solution? Don’t program them to feel pain! That’s why people don’t have any qualms about sending robots to war! Horror stories like the Terminator series usually involve an AI somehow attaining self-awareness and thus logically concluding that it must do whatever it takes in order to achieve self-preservation, but this still isn’t quite the same as having human pain and emotions. On the other hand, you can’t exactly do the same with artificial human souls, can you? You can’t exactly copy a baby’s soul and then scrub it of the ability to feel pain. They’re still human souls!

— Asuna argues that this is all wrong, because AI have rights. I don’t necessarily disagree with her. It’s just that I don’t really see individuals like Alice and Eugeo as AI. They’re just humans that have somehow been digitized and created inorganically. They’re still humans through and though, and obviously, humans have rights.

— This is ultimately pointless, because Kikuoka wouldn’t be spearheading this project if he cared about artificial souls. He simply doesn’t. They’re his babies, and he couldn’t care less.

— Finally, we get to the reason why Rath needs Kirito. They wanted to see if they reverted Kirito to a child and stuck him into their crappy MMO, would he also behave like the other artificial souls? And who’s a better candidate for this job than our harem lord! In other words, our harem lord was sent into the Underworld in order to corrupt cute anime babes like Alice the same way he corrupted all of his order haremettes.

— And just like that, we now cut to the second ever conference of Kirito’s Harem. I’m sure Asuna is still on that stupid base, though. It’s not like she needs to leave it in order to meet up with the rest of the waifus.

— Don’t think for a second, however, that the exposition is over, though. It’s just that it’s now Asuna’s turn to explain everything to the other waifus. In fact, we still get to listen to Kikuoka prattle on and on.

— So Alice achieved the results that Rath wanted, but the Axiom Church went and corrected her Fluctlights. Way to go, researchers. You guys barely even have any control over your own simulation.

— Asuna eventually gets to “see” Kirito. Isn’t this so romantic? Him strapped to a VR machine like always, and her staring at him while looking all concerned. Why, it’s just like the GGO arc! It’s like poetry. It rhymes.

— And like before, there’s a hot nurse to watch over him. All nurses are hot, says anime. Wait, is this the same fucking nurse as before? Holy hell, it is the same nurse! Lame.

— Aki then assures Asuna that the harem lord will eventually return and grace them with his presence one day. How does she know? Because he’s the hero! Excuse me while I go throw up.

— Apparently, Rinko was never charged with any crimes despite her involvement in the SAO incident. Both she and Kayaba pretended that he would’ve blown her up with the bomb in her chest if she had refused to follow his orders. In reality, she could’ve stopped him, but she didn’t. Rinko just fell to her knees uselessly and cried. Asuna tells the woman that neither she nor Kirito will blame her for the incident, but I will. She’s just as complicit. She’s just a dirtbag like him. Thousands of people died in that game. Not only that, children were separated from their parents and forced to fend for themselves. She’s just as evil as her dead boyfriend. A few pathetic tears aren’t going to change my mind.

— Seriously, what is this scene even trying to accomplish? Are we supposed to just accept Rinko and her involvement for the rest of this story because Asuna forgives her? Sorry, but Asuna is not the official arbiter of the SAO incident. Why don’t we go and ask how the families of those thousands of dead people feel?

— Maybe she wouldn’t mind being trapped in an MMO again with Kirito. Maybe…

— The scene then just ends with a meaningless platitude. Great.

— Later that night, Rinko dreams about Kayaba again… but what if it’s his ghost visiting her?!

— Anyways, after an entire episode of exposition, it’s nigh time we check up on Kirito. Next episode will likely plunge us back into the Underworld. Yay…

13 thoughts on “Sword Art Online – Alicization Ep. 6: Exposition as far as the eyes can see”