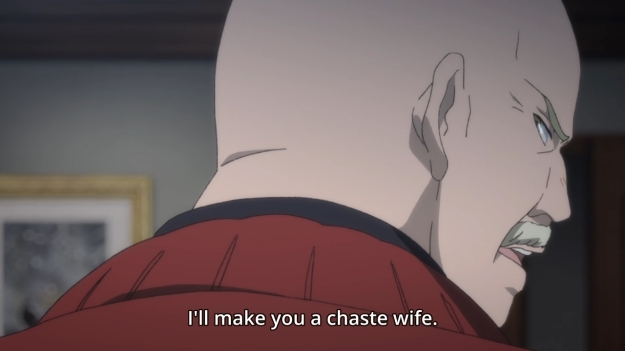 It’s kinda amazing how hard these men are fighting for Ash’s attention. Unfortunately for them, it already belongs to Eiji.

— One thing that kinda irks me about the show’s art direction is how similar these characters look. Yeah, yeah, this is a problem for anime in general, but I just feel as though it gets really egregious on this show. Every young man has the same giant chin.

— Anyways, now that Blanca has safely secured Ash for Golzine, Yut-Lung wants to give the assassin a new job: kill Eiji. See, this is what I don’t understand. Why can’t Yut-Lung just do this himself? Or have his boys do it? The reason why they sent Blanca after Ash is because Ash is near unstoppable. Only some super pro mercenary can rein the blond kid in. On the other hand, Eiji is Eiji. I mean, what can he do? Jump real high? C’mon. Do you own dirty work. In fact, Yut-Lung helped Golzine out by eliminating the old man’s enemies in the Foundation. You can’t tell me that Eiji is somehow a difficult target.

— Well, if you’re worried about Eiji, you can rest easy because Blanca refuses to take the job.

— Speaking of Eiji, he’s still hanging around with Ash’s gang. I guess Shunichi has pretty much given up on taking the kid back home. Hell, has Eiji even been in contact with his family back in Japan? Beats me.

— Eiji meets up with Sing, because he desires an audience with Yut-Lung. He thinks that the latter might know a thing about Ash’s current whereabouts… 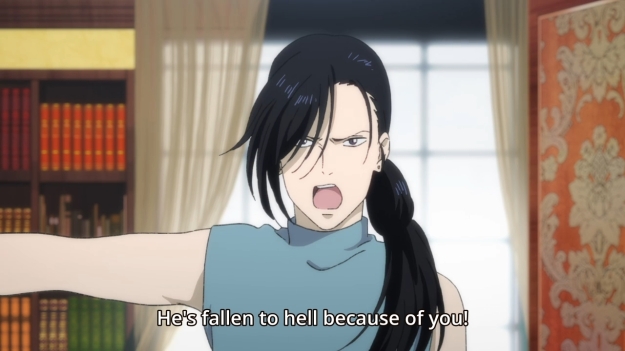 — …which is true. Yut-Lung really wants to drive Eiji into despair, so he goes on and on about how Ash sacrificed everything — even exposing Banana Fish to the public — for Eiji and Eiji alone. And yet, the Japanese kid won’t be able to do anything to help his friend/lover. Or will he? Yut-Lung doesn’t seem to think so, but Eiji obviously has other ideas. He swears that he’ll save Ash at all costs. He’ll even take a life if he has to!

— Like I’ve said in previous posts, Eiji’s character arc is finally rounding into shape. He’ll finally find the inner strength that he’s been looking for ever since he suffered that nasty accident that sidelined him from pole-vaulting. But the problem is that Ash never wanted Eiji to dirty his hands. Ash wanted to protect and shield Eiji from the darker side of this world.

— Eiji then has to go and ruin the moment by acting childishly. Lame.

— Sing is not too happy that Yut-Lung teamed up with Golzine, and he says so right to the guy’s face. Still, I don’t understand why Yut-Lung just can’t have Eiji killed right here and now.

— So what has Ash been doing? Despite what Golzine had claimed in last week’s episode, he isn’t actually prostituting Ash out to his customers… not in a literal sense, anyways. Instead, he’s having Ash meet up with US generals — yeah, you read that right — and assist the American government in tackling that nasty problem in the Middle East. The kid — let me remind you that he’s only 17 — comes up with a plan that ends up making the hardened, grizzled military brass tremble in fear!!! Ugh, this is why I can’t love Banana Fish. I can’t even like it. I actually enjoy the dynamic between Ash and Eiji, but from time to time, the show gets too caught up in portraying the protagonist like some sort of wish-fulfillment character. It’s just so comical that it ends up taking me right out of the show. 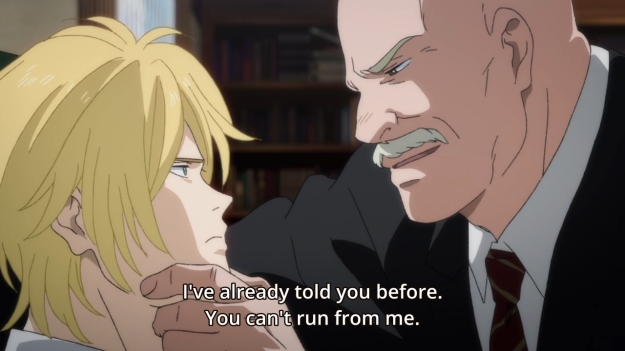 — Golzine later admits that he’s forcing Ash to sell his soul rather than his body. After all, he wants the kid to take over for him. You don’t exactly turn a prostitute into a kingpin. On the other hand, having a conscience might actually be a detriment to, y’know, Golzine’s line of work. Are you telling me that morals and organized crime don’t mix? Big if true.

— Elsewhere, we see that Max lost his job because Ash handed all of their evidence over to the bad guys. Again, nobody made copies. It’s impossible to make copies.

— Eventually, Ash hates his new life so much that his mental health deteriorates. As a result, he stops eating and ends up being bedridden.

— Eiji and Sing are still planning to rescue Ash somehow, but they need to know the guy is even located. Luckily, Golzine is apparently planning to throw one hell of a house party, and the Asian kids hope to crash it.

— While this is happening, Yut-Lung tries once more to wrap his tendrils about Blanca. This time, he manages to spook the self-proclaimed retired assassin by dredging up details about the man’s former life and his dead wife. Apparently, this is enough to make Blanca bend the knee. Still, I can’t imagine that manipulating a trained killer is a good idea.

— What’s interesting is how obsessed these guys are about Ash. Yut-Lung seems desperate when he asks Blanca about the kid. Plus, there’s the fact that he’s so jealous of the love between Ash and Eiji that he still hopes to kill the latter. Blanca also sounds bitter when he admits that Ash is no longer a fan of him. Last but not least, we have Golzine, who threatens to kill Eiji if Ash allows his body to wither away and die. Good lord, it’s just one guy. There are plenty of fish in the sea, you guys! They just won’t have 200+ IQs.

— Anyways, Golzine declares that he officially intends to adopt Ash as his child. The mere suggestion that they would have any sort of familial relationship makes our hero snap as he goes on a rant about how he has been used and abused for years. Golzine can only respond with violence, but at this point, I doubt Ash really fears death.

— The next day, Sing pays Yut-Lung a visit, because he wants to nail down the exact date of Golzine’s party. Along the way, he bumps into Blanca. Then immediately afterwards, these two bump into an assassin who had tried to take Yut-Lung’s life. Who needs Golzine’s party when there’s one happening right here?

— Unfortunately, Yut-Lung survived the ordeal. Blanca ends up pledging to protect the guy but only that. He makes it perfectly clear that he has no intention of taking a life for his new client. At the moment, Yut-Lung just seems happy that he got the assassin under his thumb, so he’ll probably forget about the guy’s necessary condition. I bet you he’ll try to command Blanca to kill Eiji at some point, and this will just backfire on him badly.

— Anyways, Blanca casually mentions that Golzine’s party will take place on the 20th, so Sing got what he came here for. Right before the episode ends, Sing’s gang and Ash’s gang meet up to go over their plans. Sounds like next week’s episode is going to be an explosive one. Plus, I expect Max and Shunichi to stick their noses in this somehow.