Hm, sextuple doesn’t quite have the same ring as double — no neat alliteration — but the team pretty much needed everyone to pull their weight in this week’s episode.

— Apple has new toys for the team: jet roller skates and jet packs. He even comes up with some view jack thing that lets headquarters see what the team members see. Cool gadgets sound like a kid’s dreams come true, but unfortunately, we’re supposed to be mature professionals. Only Kirill is impressed. Everyone else is like, “Uh, what are we supposed to do with these?”

— I mean, it makes sense. Seven-O’s day-to-day job isn’t exciting. But thanks to the power of storytelling, we only get to see the cool parts. As a result, we’re going to get an episode where all three inventions are put to good use.

— The team immediately receives a mission from the very top: a mayoral candidate’s daughter has been kidnapped by Esperanza, and Seven-O are the only dudes bad enough to save her. Yeah, all six of them.

— At first, the operation is going smoothly, but it quickly goes awry after a series of unfortunate and not-quite-so-coincidental events. Doug is supposed to follow the mayoral candidate on foot and make sure that the daughter is safe during the cash exchange. Meanwhile, the rest of his teammates will provide additional surveillance and backup. Unfortunately, a fire blocks Deana’s view from up top. At the same time, a traffic jam prevents Kirill from getting close. There’s even a potato spill just as a cherry on top. Yes, a potato spill. As a result, Doug is pretty much all on his own. It’s obvious that these “accidents” were pre-planned. 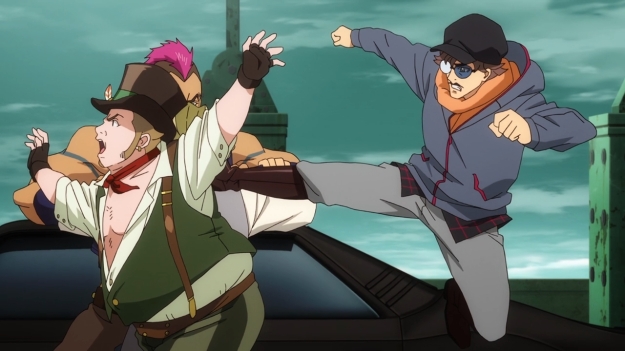 — Still, we quickly see that the mayoral candidate was in on the ruse. He staged a kidnapping for his own daughter just to look good. Geez, all this to become a mayor? Not even president, governor, or anything but mayor? C’mon.

— Well, Esperanza saw a golden opportunity to kidnap one of Seven-O’s members, so they changed the play call. At least they let the daughter go, so I guess they’re not completely evil? Well, more like this isn’t a grimdark anime series, so the writers don’t want to kill anyone if they don’t have to. Just homeless orphans to give Doug a tragic backstory.

— Back at headquarters, the team frets over Doug’s disappearance. Luckily, they receive news that the guy is definitely still alive. And thanks to Apple’s creepy voyeuristic tech, they are able to see directly what Doug sees. Basically, the good guys now know that Zabel is alive, and he wants information about the Anti-AMS bullets that Seven-O uses.

— Okay, here’s the thing. I’m sure Doug knows a thing or two about those bullets, but at the end of the day, he didn’t invent them. On the other hand, it’s a good guess that a team of scientists, engineers, and researchers had a hand in putting together this technology. As such, I’m sure there is a countless number of people that Esperanza could’ve targeted for information. The veteran cop on a team dedicated to stopping you probably isn’t the best person to kidnap.

— Naturally, Esperanza can’t break Doug’s resolve, and the guy manages to buy just enough time for his team to discern his current location. Zabel threatens to use Anthem on Doug, but he won’t do the dirty work himself. Hell, he won’t even stick around. He just leaves it to his lackey, which guarantees that Doug can stall for even more time for his team to rescue him.

— So what’s the brilliant plan? With the jet roller skates and jet pack, Kirill will swoop in and retrieve Doug. Meanwhile, Deana will be firing explosive rounds that will cause a distraction and confuse Esperanza. Last but not least, Max and Yuri will be flying the escape helicopter once Doug and Kirill rendezvous with them. Neat. I like these operations that require the entire team to pitch in. Because this isn’t a very long series, we haven’t had any opportunity to see everyone work together like this. It’s too bad this anime doesn’t get to be two-cour like Tiger & Bunny.

— In the end, Doug frees himself from the lackeys. He then jumps from the very top of the structure. I’m not exactly sure what he had in mind here. Maybe he was just confident that his team would show up and save him. Or maybe he was fine with dying. Shrug.

— In any case, Kirill catches Doug with his shoulders, and they are on their way to meet up with Max and Yuri.

— The jet pack ends up having just enough juice to get both men to the helicopter. Just as Yuri grabs Doug’s hand, the jet pack becomes useless. Good thing she is an android, so she probably has super strength. After all, she ends up holding onto two grown men and all that those gadgets strapped to Kirill’s body. That’s gotta be around 400 lbs, right? 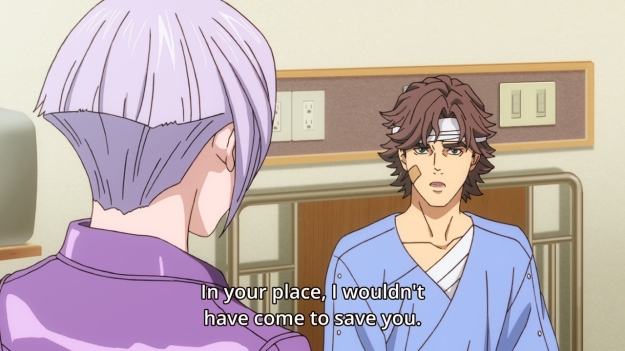 — At the weird-looking hospital, Doug expresses his gratitude but still manages to tease Kirill anyways.

— Meanwhile, the top military guy cryptically muses over the source of Kirill’s catchphrase. Uh, okay. I’m not even going to speculate. I’ll just wait and see what happens next.