Y’know, I’ve been railing on these characters’ passivity, but what if they were made this way? Would this still be a cop-out? But if Rikka is incapable of hating Akane, then why wasn’t everyone created the same way? Well, I suppose most gods aren’t perfect, and Akane is no different. Only in certain religions do people insist that their dieties are omnipotent and omniscient. Hmmm.

— Well, like almost every anime series ever, we now have a school festival episode. I’m sure Yuta will have to protect it from one of Akane’s kaiju.

— Rikka mentions that both of her parents will come to the school festival. In a previous episode, we also learned that she has a brother who goes to cram school. We have yet to see either him or her dad, though.

— Plus, Yuta’s parents are still away, right? But there is no “away.” As far as we know, there is nothing beyond the confines of this city. So does he actually have parents? What if all you have is some bit of knowledge that isn’t even true?

— Sho starts talking about the city in the sky. He wants to pin all the blame on the aliens. Surely, Akane can’t be responsible! But I don’t even know if I can blame these kids anymore for their passivity. Again, like Rikka, they might have just been made this way — purposefully made dumb and clueless so that she’ll never be threatened by her own creations. But you know how it goes. People like to rebel.

— Yuta even points out that Alexis looks like a last boss from a video game. How meta.

— Right off the bat, we’re already shifting the blame. Yuta argues that Alexis must be using Akane in order to pump out all these destructive kaiju. That might very well be the case, but it doesn’t change the fact that the girl also wants to hurt others just because she thinks they have wronged her. But it feels like Akane’s redemption is inevitable at this point. Typical anime and its “Friends forever!” attitude.

— We briefly see Anti slumming it up in a dark alleyway. Again, I don’t particularly like his character, so this doesn’t bother me one bit.

— The next day, we see Rikka waiting patiently at a bus stop for Akane to show up, but the girl is too busy putting the finishing touches on her latest creation. It’s actually just the first one with some upgrades. Still, I guess this is a sneak peek at what Yuta will have to fight later in the episode. Like the rest, it’ll go down without much fanfare. We’ve yet to have a single battle that extends past as single episode. Kinda makes these fights seem lackluster, don’t you think?

— Alexis is about to unleash the kaiju onto the city, but Akane stops him. It’s not time for them to fight yet. We usually wait until we’re at least past the halfway point of the episode!

— Apparently, their teacher is a changed man after his near death experience.

— In fact, she even lets the trio see her latest creation. She proceeds to tell them that she intends to attack the school festival. So does Akane really want to crush Gridman? Or is this all just a game to her? She’s having fun, isn’t she? ‘Cause she seems terribly bored when she’s not trying to overcome her archenemy.

— So what will the Gridman Alliance do? The simple solution is to just kill your god, isn’t it? But Akane’s a cute female character in an anime, so why kill her when you can be friends with her? Why punish a character who is responsible for countless deaths? She’s a classmate! We can’t hurt her!

— The kids also worry that Gridman might not be strong enough to tackle Akane’s latest creations. Out of nowhere, Yuta hatches a plan that will allow Gridman to “full combine” with all of the assist weapons. How? Just make everyone… smaller? I mean, I guess that would use less RAM and processing power…

— Rikka, however, doesn’t want to fight. To be fair, she isn’t completely wrong. Fighting the kaiju solves one problem, but it doesn’t solve the root problem. Even if they win here — and they will — Akane can just keep creating more and more kaiju for them to deal with. This series can’t keep trucking on forever. At some point, they do literally have to stop her.

— Gridman’s never any help. All he does is fight. When it comes to settling these disputes, he always straddles the fence. I guess he represents Yuta in that sense.

— Tired of the debate, Rikka just tells the boys to count her out. If they want to fight, they can fight. She just won’t be a part of the alliance… not that she’s actually done anything to help. But again, Sho isn’t much help either. Neither of them have really contributed anything but moral support since the start of the series.

— Rikka then says that she never agreed to be a part of this alliance. She also adds that Akane is her friend, so of course she doesn’t want to fight the girl. Again, this seems nonsensical to us, because Akane is responsible for killing some of Rikka’s friends. How can the girl just forget that? The girl is a murderer! Plus, our so-called god has never really treated Rikka much like a friend.

— But again, if the girl is made to worship Akane, then… well, she doesn’t really have a choice in the matter, now does she? If this is how she’s been programmed, she can’t help how she feels. But like I alluded to up top, doesn’t this feel like a cop-out? Oh, our characters don’t seem sensible? Well, that’s because a god made them that way! You can wave off any criticism by just falling back on this excuse.

— Sho ends up calling Rikka emotional, so the girl storms off. Unless something got lost in translation, I feel like this is a bit of an overreaction.

— Sho starts bemoaning the fact that all the girls at school will hate him now. He’s acting as if he had asked Rikka if she was on her period or something.

— On the other hand, Yuta should’ve chased after the girl and tried to comfort her. It would’ve gotten him some brownie points. Instead, he’s here with Sho. You’re never going to win her heart at this rate. But seriously, it’s hard to see how Yuta will get over this hump. He just seems so… passive, I guess. If it wasn’t for the fact that we see him and Rikka holding hands in the OP, I would never believe in his chances.

— The boys try to get Akane to delay the battle, but obviously, she’s not going to agree. Why should she care that others might get hurt? She’s been trying to murder them! I just wish these characters would call a spade a spade. Akane is a murderer. Stop dancing around the truth.

— A desperate Anti finally crawls to the junk shop to look for Rikka. He probably needs food. He probably also needs a shower.

— Luckily for him, Rikka’s mother has no problem dealing with weirdos, so she doesn’t mind feeding Anti. I guess you could also say that she’s made this way.

— We inch one day closer to the school festival. Rikka also finally confronts Akane for having killed her friends. What’s our god’s excuse? She didn’t do it! It was her kaiju!

— Akane even dares Rikka to kill her. She knows that the girl can’t.

— Finally, Akane tells Rikka that everyone is made to worship her. But again, this raises more questions than it answers. If she can do this, why can’t she also make a world that wouldn’t annoy her as much as this one seems to? Akane is always complaining about something. Complaining about going outdoors. Complaining about the school festival. Complaining about people messing up her weird hot dog sandwich. If you can make everyone worship you, why can’t you just make them not piss you off? Well, maybe the problem isn’t her creations. Maybe the problem is Akane. No matter who and what she ends up creating, she’ll never be satisfied. Because at the end of the day, we all have a hard time being happy. Maybe even a god can’t make herself be happy.

— Akane then goes, “You were made to be my friend when you were made by my kaiju.” Huh? Which kaiju is this?

— So what now? Can Akane defy her programming? Can anyone manage this?

— At the end of the day, Rikka laments to Yuta that she can’t do anything. She’s no help to nobody. Even the junk shop isn’t hers.

— Of course, Yuta tells Rikka that she’s wrong. He insists that they wouldn’t have gotten as far without her. In the middle of his speech, he even finds the courage to admit some of his true feelings to her, but the girl cuts him off. Unlucky. Oh well.

— Still, Rikka gives him a good idea. In order to protect the school, he’ll just have Gridman come out first. This way, the students will evacuate long before Akane’s kaiju shows up. Usually, our heroes sit back and wait for Akane’s kaiju to attack before they jump into action. I guess this is their way of being proactive?

— True to form, Akane attacks the city instead. And as previously discussed, Gridman is now smaller and more system efficient! All four Assist Weapons proceed to join the battle, leaving just Rikka and Sho behind. Once again, we have to wonder what these two actually contribute. Well, Yuta needs them, I suppose.

— Finally, we get to see Gridman link up with all four upgrade parts. It’s even as big as the kaiju now. But is this his final form? Well, that remains to be seen.

— That kaiju’s head just turned into a drill. That’s so silly. Your foe can just yank your head off! In fact, that’s exactly what happens.

— Is this Gridman’s final form? Nah, it can’t be. We still have four episodes left!

— For once, Gridman showed up and Anti didn’t bother to attack. I wonder what the kid wants to do now. 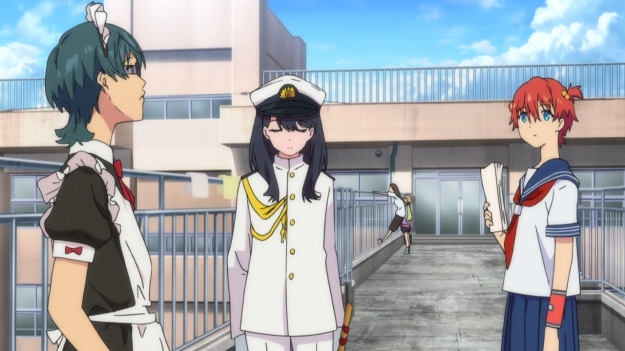 — So the school festival goes off without a hitch, and we now see Sho and Rikka apologize to each other. We also see that their class’s smart idea was to have everyone cross-dress. As for Akane, she apparently called out sick.

— The ED is now replaced with scenes from the school festival. That’s cute, I guess. Trigger doesn’t suck at making their worlds feel alive. That has never been their problem. Rather, they struggle with telling one coherent story from start to finish if they don’t have a source material to adapt.

— Yuta also appears to fall in love with Rikka even more. Usually, it’s pretty easy to notice if someone’s staring at you that hard, but maybe Rikka is oblivious.

— As for Akane, she’s busy licking her wounds.