Too bad this isn’t a longer series. The events in this week’s episode probably needed two or maybe even three episodes to cover. But unfortunately, it all gets jammed into one rushed package, so the big emotional payoff at the very end of the episode is practically wasted. Oh well.

— At the very start of the episode, we get to see what had happened to Seriouska’s fragment… kinda. Twilight just showed up one day and started eating the world? Well, Seriouska was trying to help her brother and grandma get to safety, but when she takes her attention off of Kyo for just a second, he’s magically gone. Hm. Plus, we never see him in any of the other fragments either. Why is it that? What makes him so special?

— Also, we still don’t really understand what the Twilight threat is or how it started. That’s the problem with having such a short series. They obviously had to spend time on Asuka’s friends and how they ended up becoming equalizers. But you end up having no time to properly explain anything. Oh, I’m sure we’ll get a massive infodump at some point. That’s why the keyword here is “properly.”

— So Seriousuka takes the girls to her special high-tech base. How were they even able to construct this base? At some point later in the episode, Seriousuka explains that she’s the leader of this resistance force. There’s just so much missing information.

— So where’s Yu? Well, the Yu of this fragment is supposedly dead. Normally, this means you can’t enter the fragment if you use her as an anchor. But somehow, she just ended up in Sexy Yu’s body instead. Really, though? Sexy Yu claims to just be passing through, but I dunno… something feels fishy here. 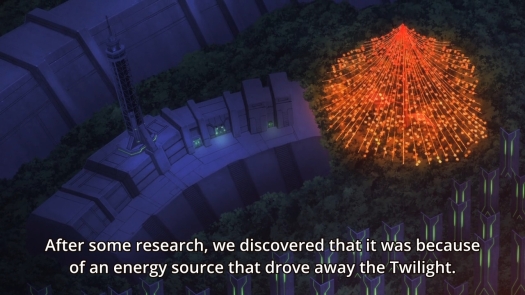 — Anyways, we do get some info-dumping, which is unfortunate. For example, this base is protected by the sacred tree. Beneath the sacred tree is something called a twilight amber that prevents Twilight from encroaching upon them. How does this all work? Shrug.

— Every time you defeat a Clutter, it leaves behind a yellow rock. As a result, the base has a room that stores them. They’re working under the assumption that if they stop Twilight once and for all, the individuals trapped in these chunks will return to normal? Shrug, I guess so!

— Needless to say, Asuka doesn’t seem to take this situation very seriously. But she’s not the only one.

— So why did Seriousuka hurry back to her fragment? ‘Cause they detected an anomaly, which suggests that the King of Twilight might be nearby. And if he’s here, then the fragment is in serious danger, blah blah blah.

— Outside the base, a bunch of kids eventually start harassing Yu, because they think she’s the King of Twilight. C’mon, really? Plus, why would a bunch kids think that they can beat the big, bad baddie? Like I know kids are normally stupid, but this is especially stupid.

— It’s also stupid on multiple levels. Don’t you think the base would have guards at all the entrances to make sure nobody enters or leaves without explicit permission? So why would the kids even be able to sneak out in the first place? And if there aren’t guards to make sure dumb kids don’t stick their noses where they don’t belong, then why not?

— Eventually, Seriousuka tells the kids that Yu is a friend, so munchkins guide the latter back to the base. Along the way, however, this kid in a hooded coat just starts following them into the base. Obviously, there is something ominous about this kid! But he just manages to waltz without any issues! Security… where?

— Yu and Sexy Yu’s reunion with Asuka is sadly short-lived. After Seriousuka tells the kids off, she’s informed that twilight amber levels are spiking again. Is it the kid? Gee, I dunno!

— The rest of the girls chase after one of the troublemakers. In doing so, they quickly discover that the base has been breached. They soon see the kid in a hooded coat, and he’s headed right for the tree.

— Just like that, Noizies appear out of nowhere and start attacking, so the three girls who can transform immediately do so. A typical battle scene ensues.

— Yu tries to join the party, but Sexy Yu is ignoring her for some odd reason. You think she’d want to protect the cute Asuka she adores so much, but I suppose we don’t really know what her true motives are.

— Finally, Seriousuka shows up, but even then, it’s futile. She’s the leader, but she’s not actually very strong. The kid in the hooded coat destroys the tree, the twilight amber goes wild, and… well, this fragment is done for. Seriously. We just got here and it’s done for. Something like this needs much more time to simmer. Instead, we get a rushed episode that just isn’t very satisfying to watch, especially when you consider what happens next. 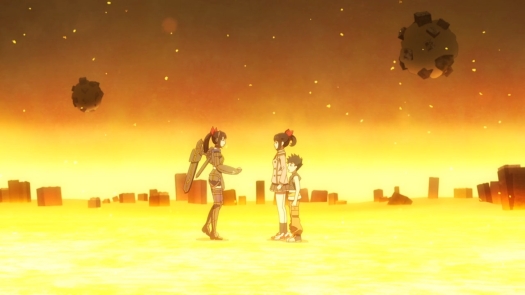 — Seriouska accepts that it’s over for her fragment. All is lost. The base is going down, and the girls have no choice but to escape. She can only hope that one of the trouble-making kids — Takumi is his name — can go with Asuka. He had two other friends, though. I guess they’re just screwed.

— As for Seriousuka, she’s going to try to attack the kid in a hooded coat. At this point, they all suspect that he’s the King of Twilight. Why not, right? Who else could the kid be? Well, c’mon, the show has been hammering home the fact over and over that Kyo disappeared under mysterious circumstances. As a result, it’s no surprise at all that when Seriousuka draws close to the kid in a hooded coat, she suddenly recognizes him. But it’s kind of goofy if Kyo ends up being the King of Twilight. I guess I want to see how they explain that.

— Meanwhile, the rest of the girls return to their original fragment. Asuka didn’t want to leave Seriousuka behind, but I mean… what could she have done? Unlike her friends, she’s not an Equalizer (yet). And even if she was, could they have won?

— Asuka immediately tries to go back to Seriousuka’s fragment, but it won’t work. Does this mean that the fragment is gone? Eh, I doubt it, but we’ll see.

— But this is exactly what I mean by the emotional payoff being wasted. We barely spent anytime in Seriouska’s fragment. As amusing as the other fragments were, they got two episodes instead of one. Two episodes for silly cowboy hijinks! Meanwhile, everything that Seriousuka has been desperate to protect ends up going down in a single episode. There’s no build-up so I don’t feel as gutted when it gets lost.

— Obviously, this isn’t the last of Seriousuka. I’m sure Asuka will figure out a way to save her counterpart. I’m sure the girls will figure out a way to defeat the King of Twilight and save all the multiverses as well. But if you really wanna do this kind of story, it’s such a shame that studio had neither the budget nor the cachet to swing for the fences and get two seasons’ worth of episodes.

6 Replies to “Akanesasu Shoujo Ep. 9: All is lost”