“Inching” is the operative word. Boy, are we inching.

— Oh man, they now have houses and everything. But at the end of the day, I would never want to live my life in any of these high fantasy isekai because 1) no modern toilets with a plumbing system and 2) no internet.

— Just another show where all the girls love and adore the main character. In fact, they’re even fighting over him. Yawn. Nothing ever changes about the fact that these shows are shameless escapism. It’s especially sad when you remember that Satoru was a middle-aged nobody. It’s like, “So this is what you fantasize about, huh?”

— Shion’s cooking is bad. Is this important information? Nah. Not gonna stop the episode from focusing on it, though.

— You don’t get brownie points for being self-aware.

— But more importantly, how long is this gag going to take? Don’t we have a story to tell? Why are we throwing away minutes at some bad cooking joke?

— Elsewhere, Gabiru’s underlings continue to shower him with praise just because he can convinced scared goblins into serving them. I guess they don’t have much of a choice. Either die to the rampaging orc army or capitulate to the lizardmen… and probably still die anyways. Well, they could always ask Rimuru for help…

— I can’t imagine the lizard hero escaping from this arc unscathed. When a story sets a character up like this, they always end up being incredibly humbled when the dust settles. He’s only here to contrast Rimuru and make us like the main character even more. It’s really quite apparent.

— Gabiru finally drops by Rimuru’s village and does his arrogant, little dance. Obviously, no one here is going to drink the kool-aid.

— Good lord, I’ve lost count on the number of times this episode has zoomed in on Shion’s cleavage. It’s also good to see that the love for boobs is universal. Even cold-blooded lizards are interested in them. Why? Because they apparently have breasts themselves. Why? Uh…

— It would’ve been nice to have a Don Quixote-like character. Y’know, someone who is incompetent, but still has pure intentions. But I feel like the show doesn’t want us to root for anyone but Rimuru.

— When Ranga shows up to talk, Gabiru is the only person who isn’t cowering. Does that mean he’s brave? Or is he just too stupid to be scared? Who knows!

— Gabiru can’t believe that everyone here would willingly serve a slime. As a result, he challenges Rimuru to a duel. Well, we already know how this is going to end. We’ve seen the slime tackle enemies way tougher than this dork. 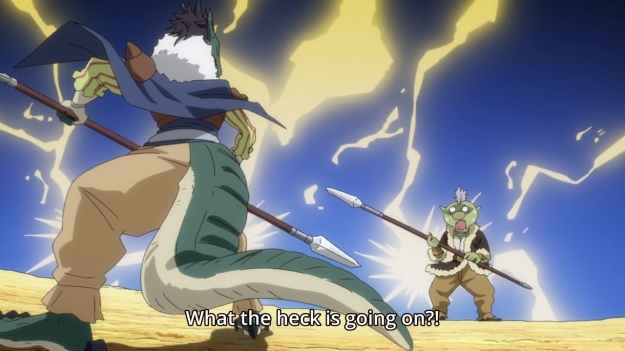 — So to humiliate the haughty lizard, the good guys volunteer to have Gobta fight him instead. I actually don’t mind this. At least I get to see someone else in action instead of Rimuru all the time.

— Unfortunately, Gabiru can’t even put up a fight. Gobta uses shadow movement to appear right behind the lizard, then proceeds to take him out in a single kick to the head. Weak, dude. You can’t even tilt at windmills.

— Anyways, the slime does the nice thing and tell the lizardmen that he’s willing to team up with them. He just won’t serve them. But despite just seeing their hero get owned by some random hobgoblin — which implies that Rimuru would be way, way stronger — Gabiru’s followers act all offended. Oh well, that’s lizard brains for ya.

— Finally, we cut to the orc army, which is just mindlessly marching without rest. Maybe they’re under a spell. The thing about having a huge army is that it also has an equally huge upkeep. But I guess this show isn’t going to delve into that kind of logistics.

— So the group sits around a table and speculates about the possible existence of either a demon lord or an orc lord. Hell, why not both?

— All of a sudden, a dryad wants an audience with Rimuru. The first thing that comes to the slime’s mind is, of course, a hot forest babe. I’m hoping for something a little more plant-like.

— Meh, still too much of a babe. Just a modestly dressed one.

— Treyni, the dryad, proceeds to ask Rimuru to defeat the Orc Lord. Okay. We kinda already knew about the existence of the Orc Lord, but at least it’s confirmed for the good guys now.

— And that’s our episode. Still as boring as ever. No character development to speak of. No interesting characters to speak of. Just people either fawning over Rimuru or Gabiru. We all know who the false idol is, though. Way too much time spent on one gag, too. Oh well..

14 thoughts on “That Time I Got Reincarnated as a Slime Ep. 11: Inching closer to war”