Let’s just say that 200,000 orcs aren’t really a problem worth worrying about.

— Rimuru is on his way to sign a treaty with the lizardmen, ’cause he doesn’t know about idiot son’s rebellion. I almost feel like maybe Souei should’ve kept a close eye on what was happening with the lizardmen, but oh well. Not all ninjas can be perfect.

— I’m surprised that the orcs are even fighting this lizardwoman 1v1. Guess they have more honor than I previously assumed.

— Yeah, the kijin are pretty strong…

— The lizardwoman was near death, but of course, Rimuru can heal her right up with his potions. Barring special cases like Shizue, he can pretty much save anybody like some kind of Slime Jesus. It just feels cheap. Not only that, the strawman arguments in reaction to any criticism leveled at this show are silly. Just because I want to see Rimuru under a little pressure and earn his victories doesn’t mean I want this to devolve into another shounen anime. Why is it so hard to understand that it can a little boring for some people when the main character can do almost everything with ease? If you like that sort of thing, fine. It doesn’t mean that I have to do the same.

— Ah, so she’s Gabiru’s imouto. And like most monsters in this universe, she doesn’t have a name. They just go around referring to each other with unofficial titles.

— God, Rimuru’s followers remind me too much of Ainz’s bootlickers in Overlord. Both of these characters could fart at a funeral and their sycophants would still find some way to praise them. Our great leader has blessed us with this delightful potpourri on such a sad day! Well, at least Shion doesn’t literally want to rape her great leader like Albedo… I think. 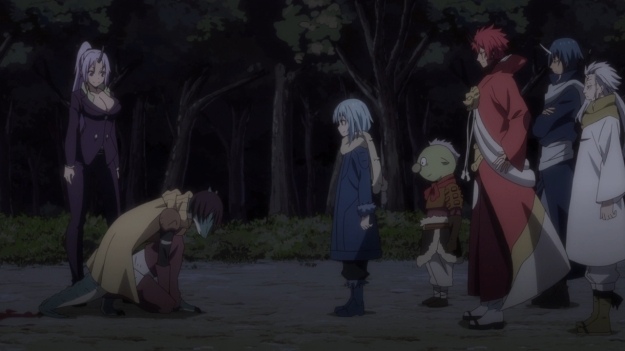 — Rimuru then commands Souei to save the chieftain, which can’t be difficult. Honestly, the lizardmen are pretty dumb.

— Meanwhile, the idiot son somehow allowed the orc army to surround him and his teeny-tiny unit. I doubt anyone is really employing any sort of military strategy here.

— By just eating a single lizard, the entire orc army now has webbed feet and can move through the marsh quickly? Uh, okay…

— Instead of just wiping the lizardmen out with their vastly superior number (and strength), an orc general steps up to accept Gabiru’s challenge to a duel. The orc general doesn’t look very… impressive. It’s just an orc in slightly fancier armor.

— Elsewhere, Gelmud is pleased with the results, but I feel like he should tell the orcs to stop messing around.

— But then out of nowhere, Treyni confronts Gelmud, so I can only assume that her powers are pretty impressive on their own.

— With her summon, she manages to lop off one of her enemies’ arms. But I mean, what is with this slapstick reaction to a grave injury?

— I love how people can just escape by producing a small amount of smoke.

— Anyways, we’re back to Gabiru, and predictably enough, he’s unable to get through the orc general’s defenses. One guy is clad from head to toe in heavy armor. He even carries a giant shield. The other guy only has a flimsy spear. I wonder if Gobta can beat this orc, though. Maybe… 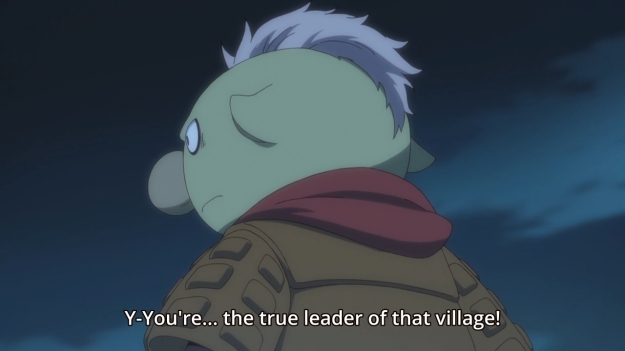 — Well, speak of the devil: Gobta shows up in just the nick of time to save Gabiru’s life. Hilarious. I also kinda wanted Gabiru to eat it, so I’m a bit disappointed about that. I have no sympathy for him. At the very least, he should lose his tail and be humiliated.

— All of a sudden, massive explosions are just ripping through the orc army. Three kijin are all it takes to face down an entire army. It’s kinda interesting how wildly divergent these evolutionary paths are. The goblins got stronger when they become hobgoblins, but not this strong. Not even close. Sure, the ogres started at a higher base level, but their evolutionary growth appears practically exponential. Meanwhile, Gabiru should be a special lizard, but he’s weak as hell.

— Or, y’know, this show just wants hot, attractive people to be super powerful.

— It’s too bad that in fantasy settings pigs are often lumped in with orcs. Pigs are actually pretty smart animals. They can be kinda cute, too. Sometimes.

— When the orc general insults Ranga, it’s now time for the doggie to flex his muscles. And even then, he’s only using a fraction of his powers. Ah well, everyone’s just taking turns stunting on the pigs. The criticism from earlier isn’t just limited to Rimuru and Rimuru alone. Is it really that enjoyable to watch high levels stomp low levels with impunity? Personally, it’s kinda boring to me. Maybe this is why I don’t find ganking in MMOs to be all that fun. It’s also the same reason why Overlord never drew me in. Watching the good guys laugh their way to victory is boring. Watching anyone laugh their way to victory is boring. The only good thing here is that Rimuru isn’t a soulless bastard like Ainz.

— The kijin then go on and on about how this will be Rimuru’s first great war victory. It’s a victory, sure. But great? C’mon. I’m not a military wunderkind if I step on some anthills.

— Things are no different with Souei. He manages to save the chieftain with ease. He even embarrasses this giant orc in the process. Ho-hum.

— Gelmud is shaking in his boots as he watches his schemes fall apart before his very eyes. He mostly fears retaliation of his master. Nevertheless, the tides of battle literally turned in less than half an episode.

— I guess this guy is supposed to be a super badass on the baddies’ side.

— Meanwhile, Rimuru has finally located the orc lord who still looks like a generic mob. And that’s it. Slime boi’s followers got to show off their skills this week, and this sets the stage for Rimuru to close it out next week.

— At this point, I have no clue why any goblin village would still be unaligned with Rimuru’s village.

2 thoughts on “That Time I Got Reincarnated as a Slime Ep. 13: Like stepping on ants”