Yeah, me neither. Look, you can’t just slap pink hair on a girl, stick her in a vehicle, and expect your show to be popular.

Anyways, mainland China appears to be under attack from a mysterious military force known simply as the Xi. The first episode doesn’t really tell us anything about them other than that they have superior fighters that can’t be defeated normally. And that’s why we need hot anime girls. This is nothing new, though. This has been a gimmick in anime since… well, forever. But moving along, Kei and Minghua are a couple of refugees attempting to flee from Shanghai when the Xi attacks their boats. Narutani Kei sounds like a pretty Japanese name. Maybe his parents were ex-pats. Or maybe his father married a Chinese woman (I assume he kept his father’s family name). Either way, our hero is still Japanese no matter where he comes from. As for Minghua, she appears to be a childhood best friend who acts like a bossy, overly-protective sister. Maybe she has feelings for Kei, maybe she doesn’t. All I know is that she’s voiced by Lynn, who’s been quite busy lately. She never seems to get the lead roles, though.

Things are going badly for the refugees when our heroine decides to jump into action. Piloting her hot pink Gripen, she proceeds to eliminate the rather small Xi force in no time. But as soon as the battle is over, the hot pink aircraft goes down… kinda. From my perspective, it looks to be floating perfectly fine on the waters. Plus, even if it was really going to sink into the ocean depths, you have to assume that her people would rescue her. Nevertheless, Kei takes it upon himself to jump out of the evacuation boat, swim towards the hot pink aircraft, and try to “save” the pilot inside. Y’know, just anime protagonist things. That’s when the girl emerges, kisses him, mutters “Nova Era,” faints, and… and nothing. I’m serious. After the OP, we see the guy waking up in a room somewhere in Japan. What’s with this narrative flow? Did he get knocked out after she kissed him? Did he somehow get dragged back to his evacuation boat? Why am I missing chunks of the story? 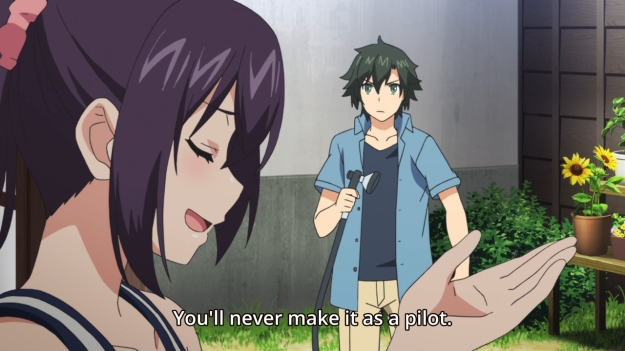 The rest of the episode sprinkles in some extra exposition as Kei tries to find his way back to his fated waifu. Basically, Minghua has been separated from her parents, so Kei is all she has in Japan. Nevertheless, the guy wants to go and join the air force, because he hopes to get his revenge against the Xi. They killed his mother, after all. If that seems a bit random, it really is. The story just kinda slides that nugget of info out there. Usually, when vengeance is on the line, I expect a little more emotion and pathos from the main character. Nothing of that sort here. No tear-jerking flashback or anything. Anyways, no word on his father. Maybe the guy is long gone, which would be par for the course. Obviously, his childhood best friend opposes this foolhardy decision to become a soldier, but the guy doesn’t relent. When he sees the hot pink aircraft being transported to a nearby base, he can’t help himself. He sneaks out at night just to try and locate the base… but to what end? What did he hope to accomplish? Have another look at the aircraft? Sneak onto the base? I’m just sayin’ — it’s not a good look when the first major character seems to act without any rhyme or reason.

Luckily for Kei, he doesn’t need a goal. He doesn’t have to try to accomplish anything. Like a typical anime protagonist, good things simply fall into his lap. Bored of your childhood friend? Here, have a hot girl kiss you for no reason. Want to join the air force? Alright, we’ll literally kidnap you and your friend and give you a big ass responsibility right off the bat. See, the problem with relying on kids as a defense against bad guys is that teenagers are ill-tempered and mercurial thanks to all their raging hormones. In order to counter the Xi, the JSDF needed to develop special fighters of their own. Unfortunately, regular humans can’t pilot these aircrafts. Regular humans can’t handles all these Gs! As a result, they created “autonomous piloting devices” known as Animas. But for some reason, Animas can’t just be an AI that lurks within the aircraft’s systems or whatever. It can’t be an AI that sits back at base and pilots the aircraft from a distance. Oh no, it has to be a hot anime babe somewhere in her teens (most likely 16). 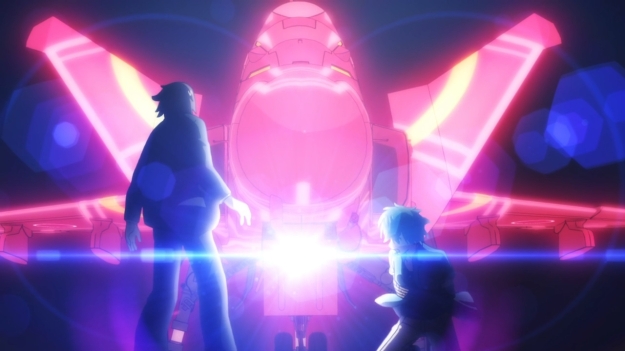 Alright, fine, you gave it a human face and a human body. We can stop now, right? Nope. Not only does it have to look like a teenager, it has to act like one. So ever since its first battle, the Anima for the Gripen has been… I dunno, sleeping. According to the fat researcher man, she’s chosen to be lazy and simply not interact with anybody. But now that special fated anime boy is here, she’s all awake and alert again. He’s that important. I’m sure there’s a reason why the piloting devices need him so badly, but will it be a good reason? C’mon, this is anime we’re talking about. And just like that, Kei can now join the air force. Will he be able to pilot his own fighter and avenge his mom personally? Probably not. But he gets the next best thing: living on base with three hot anthropomorphized piloting devices. They’re not even anthropomorphized fighters like that other crappy anime. They’re just piloting devices. Yay. Also, Minghua will probably stick around as backup. What a charmed life.

Obviously, I find this setup painfully boring, but looking at the schedule, it doesn’t look like Thursdays will have much to watch. We got this and what? That weird show where real life hot Japanese boys become ugly 3D anime characters? So I dunno, I might end up blogging this show by default. There’s also revisions, another anime that features a hot girl with pink hair, but unfortunately, it got scooped up by Netflix. Not that this has really stopped me before, but I technically can’t watch it legally yet. I know I’ve made exceptions for shows like High Score Girl in the past, but eh… is it worth bending the rules for revisions?

Anyways, when I get back from work, I’ll check out anything that also aired today.