Rimuru could individually fart in everyone’s meals and they would thank him for blessing them with his grace. So what else is new? Well, there’s a new OP and ED if you care about that sort of thing. I don’t, so I skipped them. Rimuru’s first post-war (was more like a single battle than a full-fledged war) decision is to not charge the remaining orcs with a crime. Look, I done the same. I totally agree that it’s more prudent to recruit the orcs and have them under your fold. Enacting a harsh penalty would’ve just bred resentment and hatred. And who knows? Said resentment and hatred might have led to another war. So yeah, go ahead and turn the orcs into allies. I just hate the slime’s reasoning. I’m sorry, but’s a load of crap. You don’t invade and literally eat other nations, because you’re suffering from starvation. Animals do that. As far as I know, these races might be considered monsters, but they’re not animals.

I also think it’s silly that Rimuru never faces any opposition. The leader of the lizardmen (later named Abiru) doesn’t exactly agree with the slime’s decision at first, but he eventually goes along with it. But surely, other lizardmen might disagree, right? People who have lost loved ones. People who have suffered at the hands of the orcs. People who didn’t come out of this “war” unscathed. No decision ever has 100% approval. That Time I Got Reincarnated as a Slime wants to incorporate nation-building and administration into its story, but its inability to paint us a well-rounded picture mars the narrative. I’m not saying that Rimuru can’t be wildly successful, but his rise from slime to chancellor is an absolute walk in the park. Oh yeah, I guess I should talk about the chancellor thing. Since the forest is going to work together as one, they may as well appoint a leader. Obviously, everyone agrees to serve Rimuru. No opposition here. Not one bit. 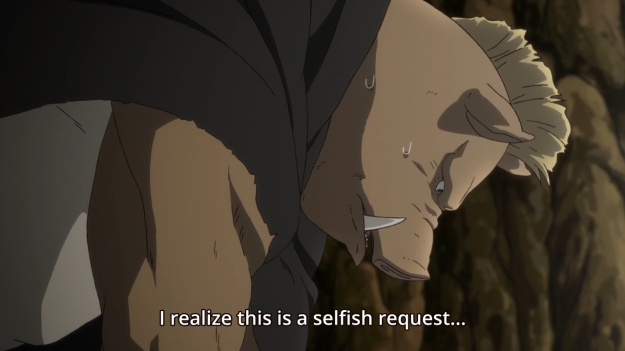 Afterwards, one of the orcs still feels too guilty to just accept Rimuru’s mercy. As a result, he goes to the kijin and offers up his own head as penance. But of course, the kijin are so far up Rimuru’s butt now that they no longer hold the orcs any ill-will. But — and this is a big but — if the orcs ever so much as lift a finger against their Dear Respected Wise Leader Kim Jung Rimuru, there will be hell to pay!!! Honestly, that’s hilarious to me. Yeah, you guys wrecked our village and killed our families, but let bygones be bygones. We’re over it. We’ve fully healed from that trauma. We’re totally A-OK now. Just make sure you drink the kool-aid and join the cult! Again, I don’t mind that the kijin no longer wants revenge against the orcs. Again, I agree that the more prudent course of action is to encourage teamwork and camaraderie. But I can’t help but laugh at how easily this all went down.

Let’s wrap up a few loose ends. Rimuru tells us that he went and named all remaining 150,000 orcs. He claims it only took him ten days. Let’s say it takes him ten to fifteen seconds to name someone. Let’s say he also has to take a break every so often due to running out of magicules (or whatever the hell they’re called). Well, I’ll just leave it at that. Someone can do the math if they want. Meanwhile, Gabiru ends up being excommunicated. Funny how he received the harshest punishment out of anyone who participated in the “war” unless you count the orc king being eaten. Still, the idiot son has his equally idiotic followers, so he’ll be okay. Last but not least, the bad guys lounge around and act as if this latest setback just made things more interesting for them. Look, that Demon Lord dude can act all cool if he wants, but as far as I’m concerned, Rimuru hasn’t had to break a sweat all series long. Pardon me if I don’t take this oh-so-terrifying villain seriously.

We’re told that over the next three months, the orcs have become high orcs and assimilated into the village successfully. Funny how the kijin’s appearance looked so different after they evolved, but the high orcs look mostly the same as before. Speaking of the village, it has improved by leaps and bounds. Not only does it now have an aqueduct, it also has flushing toilets. I actually have to give That Time I Got Reincarnated as a Slime credit for this. In every other dumb isekai series, everyone’s always super gungho to live out their new lives in some fantasy medieval setting. No one ever complains about the fact that they now have to give up modern amenities like, y’know, a proper sewage system. Oh man, I have to take a dump in a whole in the ground, but no big deal to me! So y’know, at least Rimuru went and made life easier on himself. I still wouldn’t be able to live in this world, though. No internet is a non-starter for me.

Eventually, news of the orcs’ defeat reaches Gazel. Remember him? He’s king of the dwarf city despite the fact that he doesn’t remotely look like a dwarf. As always, when one nation suddenly becomes powerful, the other nations become wary. So he’s come to see Rimuru personally in order to suss out whether or not the slime might become a threat to Dwargon in the future. So how do we settle this? By having a swordfight, of course. Christ, what a bunch of meatheads. Well, Rimuru is successful in blocking Gazel’s signature move, so that ends the short-lived competition. Not only that, the dwarf sovereign is now convinced that the slime is a good person. Haha, okay. That’s what we need to do. Someone should just challenge Donald Trump to a duel. Afterwards, it’s more talking. Blah blah blah, let’s work together, form a treaty, whatever. Rimuru also finally names his nation. In any other show, I would wonder if Gazel’s intentions are entirely pure. But considering how this is That Time I Got Reincarnated as a Slime, I’m sure everything’s fine and dandy.

7 thoughts on “That Time I Got Reincarnated as a Slime Ep. 15: Birth of a nation”