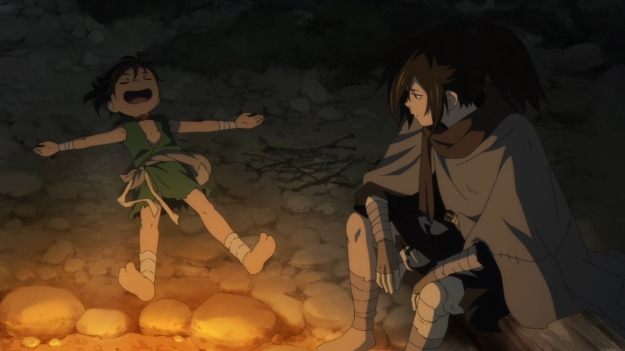 Now that we have a second episode under belt, the narrative is starting to take shape. I have been told that the original story featured forty-eight demons for Hyakkimaru to slay. In this adaptation, however, we are down to just twelve. Twelve demons for twelve or thirteen episodes? Maybe. We slew a demon last week, and we’re slaying another demon this week. As a result, I can’t help but imagine that each week will feature a new monster for our hero and Dororo to tackle. Color me somewhat disappointed, because monsters-of-the-week are no fun. They just get predictable and stale, especially when the demon designs are not all that impressive. I mean, I get it — this is not a show with a huge budget, so it’s not like I expected to be blown away by the production values or anything. Still, a solid art direction can still go a long way. Our monster-of-the-week is a step up from the sludge monster in the previous episode, but it still looks cartoonish. It still doesn’t look very threatening. It still looks like something out of the Garo series. To compound matters, our monster-of-the-week bleeds purple. Purple! I know they’re demons, but when has that ever stopped anybody else from making them bleed red? So why purple here? Sigh, I just don’t get it.

So yeah, the adventures of Hyakkimaru and Dororo continue. The kid sees a goldmine in his new friend and his ability to slay demons. They can go from village to village and make big bucks. Who you gonna call? Demonbusters! Plus, in theory, they should be able to sleep well at night, because they’re doing a good deed. Sure, Dororo intends to reap the rewards for Hyakkimaru’s efforts, but hey, few things in life are ever free. Unfortunately, the partnership is immediately off to a rocky start because, y’know, Hyakkimaru still can’t talk, see, hear, or even smell. Dororo never quite catches onto this on his own, though. A blind old man — in fact, the same blind old man from the previous episode — had to spell it out to the kid: Hyakkimaru can’t see like him. Even so, this doesn’t stop Dororo from taking his new partner to a nearby village where a demon-slaying is required. At first, we’re led to believe that this strange figure is the bad guy. After all, I guess it would be kinda creepy to some dude with a giant head staring at you in the woods. But Hyakkimaru has Predator-vision for demons, and he doesn’t even flinch when the strange figure approaches them. On the other hand, when they go to meet Lady Bandai, the village’s chief, he quickly brandishes his weapons. 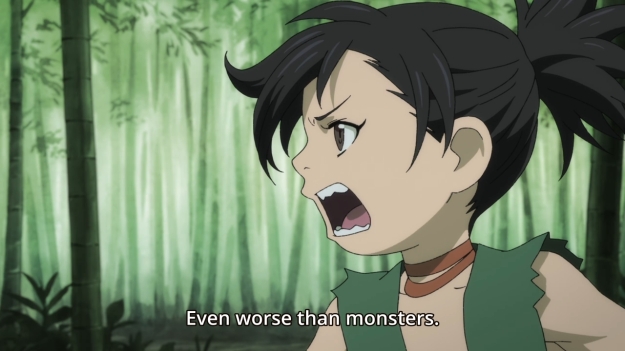 If you haven’t already realized it, the real monster is… psst, humanity. Y’see, this village is a dump. Even without a monster plaguing it, the village has nothing to offer the world in terms of goods. So when Bandai came along and took over, the villagers saw an opportunity. They can feed outsiders to the demon, and in return, they get to keep any possession left behind. The strange figure ended up being like an apparition that was trying to reveal the truth to the whole world. So y’know, Hyakkimaru does his thing and fights the demon. Thankfully, the action is a little more coherent this time. We can understand why Bandai bites it in the end (good ol’ strange figure and his bell coming through in the end). Afterwards, the good guys uncover the hidden cache of buried money and Hyakkimaru gets one of his body parts back. I’m not exactly clear what he got back, though. His nervous system? His skeleton? His body? Ah well, next week’s episode will probably make it explicit. Finally, Dororo apologizes to Hyakkimaru for doubting him, and the hero returns the favor by writing his name into the ground. Elsewhere, we see that Lord Kagemitsu is growing increasingly uneasy at that the thought that his firstborn son is still alive.

All’s well that ends well, right? Not exactly. I can’t help but wonder, however, about the fate of the village. So what was the aftermath? What were the consequences of killing Bandai? Did the villagers even get punished for their crimes? Did the good guys take the buried money away? Did the villagers get to keep the money? Look, if you’re going to do this whole “people are the real demons” narrative, you gotta follow through with it. You can’t just cut to the good guys going on their merry way and act as if everything’s all good. I know that this isn’t meant to be a long, fleshed out adaptation, so some details are going to be truncated. Still, I can’t help but feel a little disappointed. I also have a couple more quibbles to mention before closing this post out. I don’t think the narration is really all that necessary. I don’t think anyone needs to tell us that Hyakkimaru lacks normal human vision. Whenever he looks at Dororo, this is what he sees. Just simply showing us this is enough. I don’t think an old man needs to chime in and explain the obvious. What makes it extra painful is when the blind monk shows up later in the episode and explains the same damn thing again to the audience! There’s a certain brevity to good storytelling, and Dororo isn’t taking advantage of it. 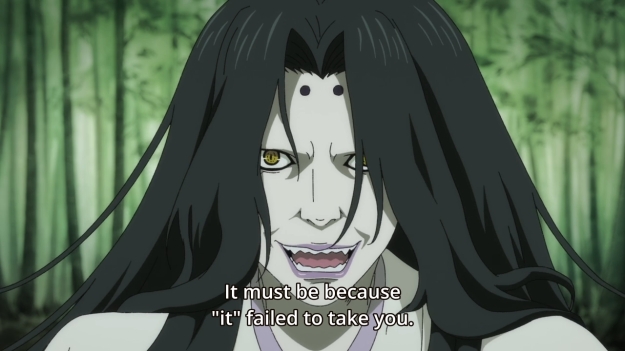 There were a few other loose ends that may or may not amount to anything. For some reason, Bandai’s human form resembled Dororo’s mother. Why? Beats me. I doubt this will amount to anything. Right before Bandai died, she mentioned something about how “it” failed to take Hyakkimaru. I imagine that the broken statue from last week’s episode had managed to protect our hero from “it,” but what is “it?” All we can do is wait and see. But that’s all I have to say about this episode. I’ll be back tomorrow with a post on the latest Mob Psycho 100 episode.